"Holidays such as St. Patrick's Day and Cinco de Mayo are no more about beer than Presidents Day is about selling cars. ...In the beer world, St. Patrick's Day comes at the end of what is typically a long, dry winter," Jason Notte wrote in TheStreet.Com, "Why Beer Lovers Should Hate U.S. Drinking Holidays."

As an intrepid beer culture reporter, I went looking for Irish people at the St. Patrick's Day Festival, to see if beer-drinking is really an American bastardization of tradition. Turns out, as Wes Marshall here at the Chronicle suggested, only green lager is. 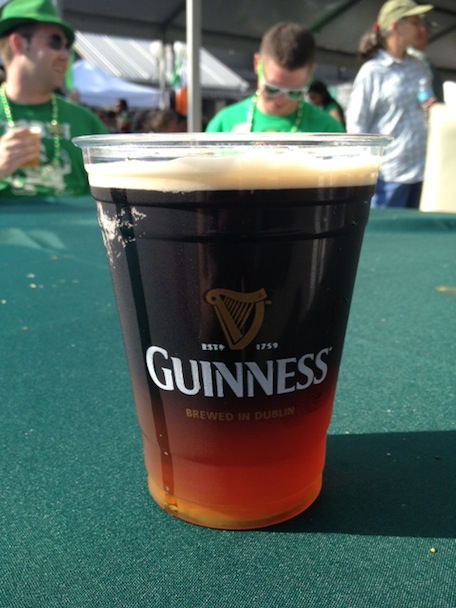 Guinness and Thirsty Goat Amber, because American beer holidays put awesome in a cup. No “Irish Car Bombs” here, because those were horrible. (Photo by Ivy Le)

What is an American holiday anyway? Is it July 4th with its watered down brats and German salad, which we've co-opted and renamed coleslaw (from the Dutch koolsla)? Is it Martin Luther King, Jr. Day when we spread quotes from a great man on Facebook?

I think a celebration where Scots and Catholic Irish and Protestant Irish and Vietnamese Texans share copious amounts of beer together is American indeed. 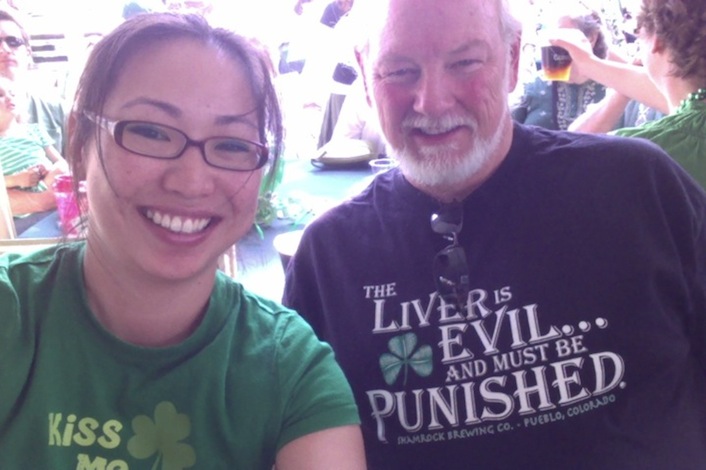 Dave Johnson and I at the outdoor stage of St. Patrick's Day Austin, wearing our captions. (Photo by Ivy Le)

Rollin MacRae is the man to talk to about registering for language classes at the Gaelic League. He said, “My neighbors growing up in San Antonio were Mexican, German, and Czech. So what were we?” Gaeilge, apparently.

The Gaelic League of Austin, which helps host the St. Patrick's Day Austin event, was started by linguistic students at UT in 1993, and UT students hardly need a league to justify drinking beer. “They started the Gaelic League, because the Irish culture had been so pushed to the edge, it could become lost,” explained Rollin. “There isn't any culture we can't learn something from.” 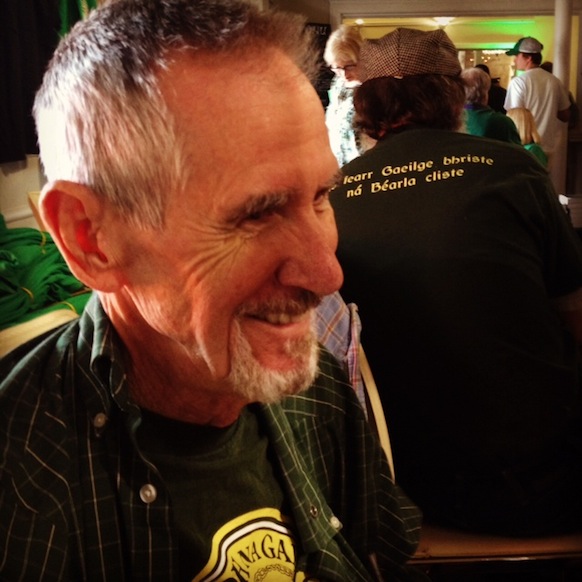 Rollin MacRae. The shirt behind him says, “Broken Irish is better than smooth English.” (Photo by Ivy Le)

I also asked Rollin about beer. While Guinness is one of the oldest breweries in the world, he explained, Irish historically made mead. Alcohol is always a part of a day off work, but beer is more recent, as in a tradition only a couple centuries old.

Here, Notte, the beer lover, may have a point. Theodore Johnson, an African American at HuffPost Black Voices who is 1/16 Irish every day of the year but only wears a green button on one, found, “As it turns out, porter was first brewed in Ireland in 1776, the same year the Declaration of Independence was signed. That's American enough for me.”

Top o' the Evening!
Rollin' in the green at Dog & Duck, Opal Divine's, and more