We've discovered a fool-proof way to attract much-needed rain to the Austin area at the end of the first week of March every year. Just invite 500-600 out-of-town guests to an outdoor lunch party featuring Central Texas barbecue legends, and the rains (and the people) will come 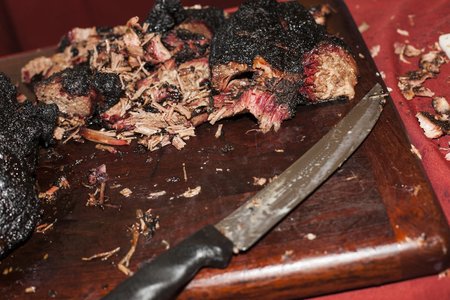 The meat of the matter (Photo by Spencer Selvidge)
This is the fifth year my co-host and former Austin Chronicle colleague, Lindsey Simon, and I have hosted the Barbecue Crash Course, an official kick-off party for South by Southwest Interactive. Our concept was simple: bring the best in authentic Central Texas barbecue to a convenient location so that festival guests could pop in for lunch and get a genuine sampling of Texas barbecue, music, and beer as they head into the wildly-popular Interactive segment of South by Southwest. Our tech-savvy international guests always love the party and it has proven to be a social media bonanza for our barbecue vendors. Even the APD cops assigned to our event love it. Lots of happy people; except for the rain.

The first three years, we set up shop at Emo's and the funky indoor-outdoor venue worked well with only an occasional sprinkling of rain one afternoon. The sale of Emo's forced us to find another venue and that's when the folks at South by Southwest and High Beam Events made the Brush Square Park available to us. Though using the park added a couple more layers of city permits and paperwork, Brush Square is convenient to the Hilton and the Convention Center and is already set up with fencing, a stage, and a sound system for subsequent events over the fortnight. And after two rainy years there, Premiere Tents knows exactly how to achieve maximum crowd protection. Crowd chowing down, safe and dry in the tent (Photo by Spencer Selvidge)

As the party grew and became more of a logistical nightmare, Lindsey brought on wedding planner Carmela Hartman to handle all the permits, paperwork, and logistical details. (And as retired caterer who absolutely hated catering detail-heavy weddings, I've never been so glad for anyone's help in my life. She's not throwing a chic wedding for us every year, but there is a tremendous amount of detail work in pulling this thing off!) Now we have a very efficient system and with the very able assistance of South by Southwest volunteers and Pink Avocado Catering, the Crash Course runs like a well-oiled machine. Except for the rain.

Last year was a tough one. Our first time in Brush Square and it poured down cold rain on a windy day. The rain made a mud puddle of the park, but hay solved that problem. Beaver and the boys rocked the tent and the folks who did come got to eat all the authentic Texas barbecue they could hold!

This year, predictions of shower possibilities had us tenting just to be safe and that turned out to be a good thing. Misty rain greeted our vendors and guests, but the party went on just the same. When the band took the stage, Beaver asked for a show of hands and reminded our guests how much better the weather was this year than last, and he was right. 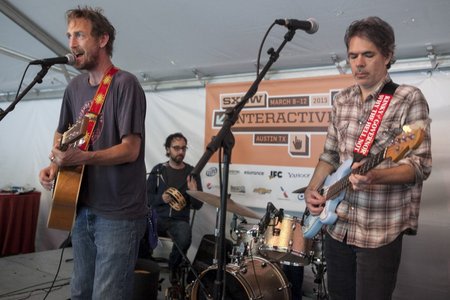 Enough about the weather, you're thinking, wasn't this party supposed to be about barbecue? Why, yes it certainly is. Through trial and error, we've learned that it's best to invite barbecue vendors from out of town for two simple reasons: bringing the legends of Central Texas barbecue to a park near the Convention Center and the conference hotel means South by Southwest participants don't have to rent a car and choose between panels and a barbecue tour; and the best Austin barbecue joints are now too busy during the festival to participate. Everybody wins. Our stellar line-up of Central Texas barbecue legends included the following. 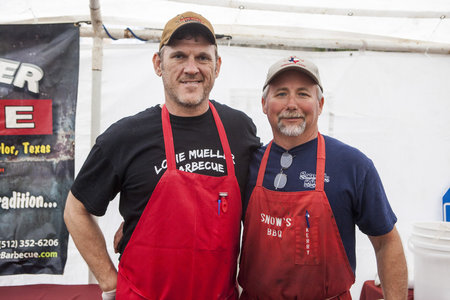 Opie's Barbecue from Spicewood: The Ashmores and their pitman, Marco Ogelsby, are building quite a name for themselves just West of Austin. 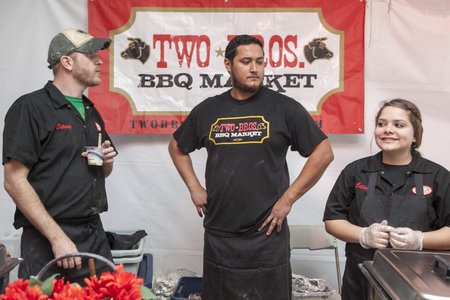 My culinary contributions to the feast are the traditional Texas barbecue desserts. Folks finish off their meal with creamy banana pudding and/or peach-blackberry cobbler topped with scoops of Homemade Vanilla from our friends at Blue Bell. Guests from outside Texas who've heard raves about Blue Bell from their Lone Star friends are always eager for a scoop. The Crash Course is one of my favorite things every year and it always reminds me how lucky I am to know such generous and talented people who pitch in to make it a success. Our vendors show up with uncommonly good meats and sides every year and Beaver Nelson's band sets just the right musical tone for barbecue in Austin. And really, what's a little rain when we get to share the wonders and traditions of Central Texas barbecue cuisine with new friends from all over the world every year?

It always pleases me to hear repeat visitors explaining the system to the new folks in line, saying "This is how they do it down here; you get a cafeteria tray lined with paper, pick up all your condiments, and they'll put the meat right on it. It has something to do with their history." That's right, it does, and we're happy to share it. 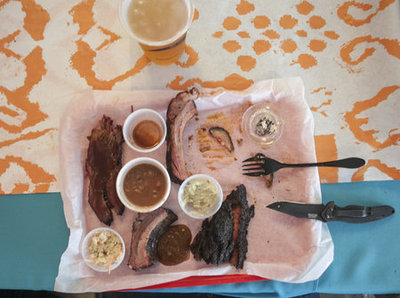 First, you get a cafeteria tray . . . (Photo by Spencer Selvidge)