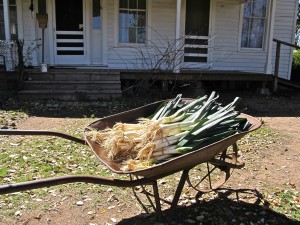 Enormous leeks from Boggy Creek Farm
The big news this week is that three! count ‘em three! of our Austin area farmers markets are relocating their operations this week!

The HOPE Farmers Market, as I mentioned last week, will be at their new location this Sunday, Plaza Saltillo. Plaza Saltillo is a stop on the Cap MetroRail at East Fifth and Comal, which resembles a classic Mexican plaza, but with full and convenient handicapped access. The space is much larger than the HOPE Markets’ former home at Pine Street Station, and includes sheltered areas for vendors, tons more space, and bathrooms. At present, there is no rail service on Sundays, but it is to be hoped that eventually folks north of Plaza Saltillo will be able to take the commuter train to the HOPE market.

To celebrate the new location, nearly all of HOPE markets’ vendors will be on hand both this Sunday and next Sunday, March 10th. That means that the bi-monthly Peeler Farms Chicken, Mill-King Dairy, Wild River Ranch, RRR Farms and El Lago GMO-Free tortillas will all be there, in addition to the regular vendors which include Johnson’s Backyard Garden, FLOUR Bakery, Pate Letalier, Healthy Hound, Lamba’s Royal Indian Food, and many others. Returning to the market this week will be Dos Lunas Cheese, Austin Clothes Exchange, so they will be there this Sunday as well!

I know I have written about this before, but it seems like a good time to mention it again: the Seedling Truck, the mobile kitchen of Royal Fig Catering, which has been offering gourmet brunch (complete with house made bacon) at the HOPE Market, has expanded and is now also offering The Seedling Pantry, a stand with Chef Dan Stacy’s pantry items for sale, such as Chicken and vegetable stocks, ramen stock, seasonal jams and jellies, pickles, breadcrumbs, and spice rubs.

This weekend will be the the new HOPE market’s “soft opening”; the Grand Opening of the Plaza Saltillo HOPE Market will be on March 10, when again, all the vendors will be there and special festivities are planned.

Moving on! The Lakeway Farmers Market is changing its name to The Lone Star Farmers Market, and moving to the parking lot of the Lowe’s in Bee Cave, which is in the Shops at the Galleria. The market will be from 10am-2pm Sundays. Generally I only cover Farmers Markets that are inside the city limits in this space, but I thought I would do them a solid and mention it-

The SFC Farmers Market East is moving as well, and changing its hours! It will now run from 3-7pm every Tuesday, and the new location will be at MLK Boulevard and Miriam Avenue, near the M Station at the MLK Jr. Capital MetroRail stop and not far from the new building SFC is scheduled to move into in May.

After a couple of weeks of writing about the 2 Happy Children Farm's artichokes (for sale at the Barton Creek Market), I have yet to actually get any; turns out they are selling out like lightning! If you want baby artichokes, get to the 2 Happy Children stand right at 9am. Ditto for the Romaine lettuce at the Winfield Farm Stand. Happily, the supply of strawberries from the STAR stand and the Fruitful Hill Stand are holding out for nearly the whole morning. 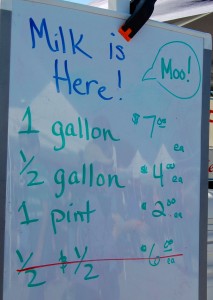 Low Temperature Pasteurized Milk from Full Quiver Farms (Barton Creek)
Celtic Seafare will be at the Barton Creek Market this Saturday, and their smoked salmon will be from British Columbia this week.

If I could say it with the caps locked I would: Full Quiver Farm now has low-temperature pasteurized milk for sale! I am even going to subject you to this very boring photograph to prove it. I bought some Full Quiver milk last week and it was truly delightful, plus, its nice to have a little dairy competition going on. (At least there is a possibility of a price war!) 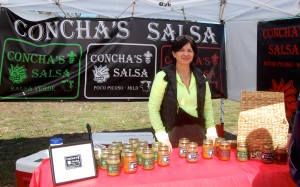 Concha's Salsas (Sunset Valley and Downtown)
Let’s talk about new vendors! Sunset Valley Farmers Market (and SFC Downtown) have a new Salsa vendor, Concha’s Salsas. I was all primed to get a jar of her Ranchero Salsa, but she had completely sold out (Downtown too!) More on this story as it develops, by which I mean, when I buy a jar this weekend. 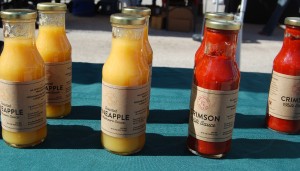 New, Extremely Photogenic Sauces from Bravado Spice Company (Barton Creek)
Bravado Spice Company has appeared at the Barton Creek Market with their two extremely photographic sauces, Roasted Pineapple with Habanero and Crimson Chili Sauce. These sauces really do look right down my alley, but due to lack of funds I had to choose between trying these new sauces and getting a jar of Pogue Mahone Dill and Garlic Pickles. I got the Pickles, and I must tell you, they really are the best dill pickles I have ever eaten, hands down, bar none, these pickles are incredible, you are not going to believe how good they are! But back to those luridly colored sauces (both of which I am sure would be awesome on shrimp!), I will let you know next week if they taste as great as they look. 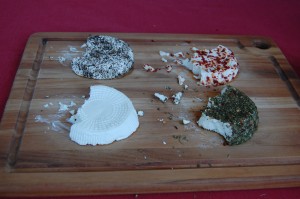 Pure Luck Fresh Chèvre: Peppered, Red peppered, Herbed, and Plain
Pure Luck Goat Cheese, which sells at the Mueller Market, has its full line of fresh goat cheeses again! While the goats were kidding, the goat milk had to be reserved for the babies. But now there is enough to make chevre again.

Dai Due Butcher shop, which sets up at Mueller on Sundays and Downtown on Saturdays, will be serving Biscuits and Gravy with Venison sausage this Saturday, as well as Beef Chili with Cornbread, Cheddar and Onions and several other selections. Additionally, they are featuring their Hill Country Mincemeat this weekend, on sale for $12 a quart. I made mincemeat tarts again this week with it, and it is really worth it; this mincemeat is just bursting with apples, pecans, figs, peaches, pears and honey.

Boggy Creek Farmstand (located at Boggy Creek Farm on Lyons Road) is Austin’s very first direct farm-to-table market (I mean, since probably 1950) so I am going to include them in my round up. They have got absolutely gigantic leeks this week, just take a look! Definitely swing by Boggy Creek if you are shopping on the East Side this Saturday. 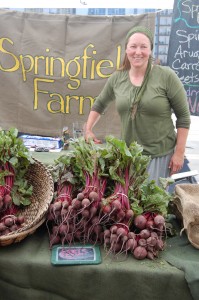 If you get there early: baby artichokes and asparagus. Or so I have heard!