Dinners to Rock To Series Does Rock

When I first read about Dinners to Rock To, my heart skipped a beat. Seeing that the first four dinners of the series were inspired by some of my favorite bands, I just had to make a reservation. I had to meet the genius behind this idea, which seemed torn out of a page from my own journal.

New Yorkers and recent newcomers to Austin Adam Orman and Fiore Tedesco are the men behind the coolest dining concept since, well, dining and music. “I got the idea for this project while working on a scallop and foie gras dish that was plated like a seascape,” says Chef Tedesco. “I thought the dish looked like it should be called On the Beach, which had me thinking about Neil Young … then I thought about making a plate for each of Neil Young's albums … and then doing the same for all of my favorite bands.” 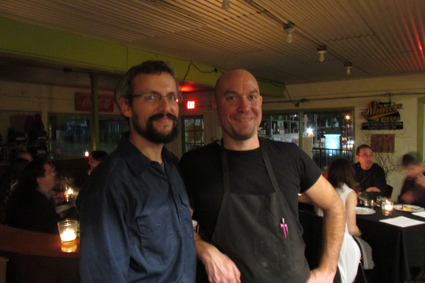 Adam Orman (left) and Fiore tedesco, the badasses behind Dinners to Rock To. (Photo by Claudia Alarcón)

Like me, Tedesco has been passionate about food since childhood. After spending a decade traveling the world as a professional musician, Tedesco returned to New York intent on making a career in food. He has worked under the tutelage of Michael Anthony at Gramercy Tavern, as part of the opening team with Carlo Mirachi at Roberta’s, and with Rene Ortiz at La Condesa. His traveling restaurant, The Brooklyn Laundry, debuted in 2007 and was featured in W magazine and the New York Daily News.

Tedesco came to Austin with his wife Katie and daughter Lucy a year and a half ago, when Katie was awarded a writing fellowship at the University of Texas. “My initial thoughts were that I would open a little sandwich shop and take it from there. Then I got to working at Franklin Barbecue and I've gotten hooked on being able to live a balanced life, learning barbecue and spending lots of time with Katie and Lucy,” Tedesco explained.

Adam Orman, his friend and partner in crime, worked as a bartender, manager and sommelier in New York and San Francisco before moving to Austin four years ago with his family. “For the last two and a half years I've been taking care of my children and teaching film,” says Orman, “and only got back into the food service racket because of Fiore. He offered me an opportunity to marry food, music and wine, serve delicious, smart, exciting dinners and still be a father. In between playgrounds and storytimes, I taste wine and update Facebook.” It is obvious that, despite their passion for great food, wine, and music, the two are first and foremost devoted family men.

Their joint catering venture L’Oca d’Oro (the golden goose) stages Dinners to Rock To every Sunday at Franklin Barbecue (900 E. 11th). Regretfully, I did not attend their inaugural dinner dedicated to The Pixies (I had plans for Super Bowl Sunday, as you may imagine), but was captivated by the photos of dishes such as Surfer Rosa: charred octopus, chicken liver 'chorizo', and salsa Veracruz, and Trompe Le Monde, avocado semifreddo, Madeira cherries, Meyer lemon semolina cookies. 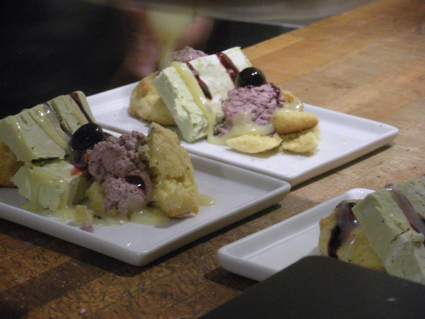 I wasted no time in making reservations for the Metallica follow up, lured by the promise of a "curiously Florentine" dinner that would honor the band’s first four albums “before they went Adult Contemporary.” We were blown away by the creativity and adventurousness of the dishes, and the exquisite, out-of-the-box, spot-on Northern Italian wine pairings by Orman. At this intimate, professionally-staffed dinner we enjoyed Master of Puppets, an unlikely but superbly balanced combination of winter melon, melon water, fried walnuts, green walnut caramel, and schiacciata and Kill 'Em All, a beautifully arranged wagyu tartare with juniper smoke, deconstructed pesto Genovese, and the most perfectly soft-cooked quail egg. 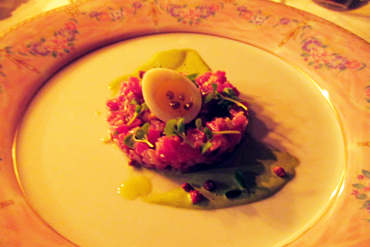 My favorite was Ride the Lightning, a crispy, crunchy slice of Richardson Farms porchetta with fresh endive, fried kale, and a pine tobacco vinaigrette. For dessert, my favorite album, … And Justice For All, featured gelato di vin de noix, a grape-studded schiacciata con l'uva, pickled grapes, and raisin powder. Of course, the background soundtrack prominently featured the honored San Francisco metallers, with selections from some of metal's finest like Judas Priest and Iron Maiden, sparking conversations with our fellow diners about our favorite metal albums and songs. A headbanging good time was had by all. 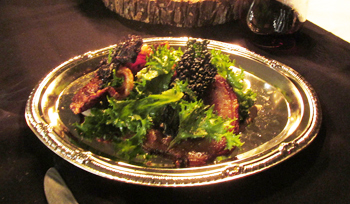 “Creation is wonderful," says Tedesco. “The idea of having a thought, forming an idea around that and then figuring out what that means and looks like and how to get it done; that it where it's at. I'm a space cadet, always have been. I was born deaf, stayed that way for years, got my hearing back, but never shook the daydreaminess that comes with the territory. Ever since then, I've spent my time trying to satisfy becoming the following: Michael Jordan (sadly never happened), a professional tennis player (got very close), a rockstar (star might be taking it a tad far, but mission accomplished), and a chef (so far so good). This is to say when I get an itch, I scratch real hard. Thus, this current dinner series.” 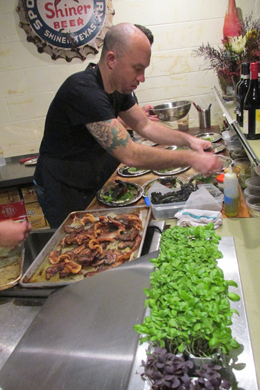 Chef Fiore Tedesco and staff busy plating away the spectacular Ride The Lightning dish. (Photo by Will Larson)

According to Tedesco, last weekend’s tribute to Fleetwood Mac, billed as 40 years in seven courses, “was maddening and super fun at once. We stretched out in several directions, adding a second seating, adding three courses to each seating and getting way out there with some of the platings (See: facebook photos of Rumours/Mirage dessert). We were successful with each of these, which bodes well for the next phase of more ambitious shit I'd like to do.” 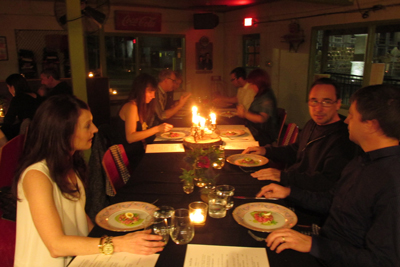 The next six dinners are as follows:
March 3 – Prince
March 17 – Roy Orbison
March 24 – The Clash
March 31 – Sam Cooke
April 7 – Madonna
April 14 – Radiohead.
> Get your reservations now so far, every Dinner To Rock To has sold out.

Dinner to Rock To