Started by Chris Gross in June of 2005, FrankenBike hasn’t missed a beat, hosting swap meets every month since. Michelle Moore joined him in 2008 and the dynamic duo has helped FrankenBike expand beyond Austin city limits with swap meets in eight cities across five states. And in Austin, it is expanding beyond the meets to become a social organization for cyclists.

Over the years, they have developed partnerships with over 60 sponsors and now hold a strong alliance with Amy and Rob Cartwright, owners of Independence Brewery. In addition to having a booth at the Independence Brewery First Saturday events, FrankenBike wanted to offer a space for cyclists to hang out, get to know other cyclists, and listen to good music. Hence, the birth of the pop-ups. The party had an easy atmosphere and everyone was clearly welcomed into the group, regulars and newcomers alike. Michelle handed out tickets for free pints of Independence beer from the bar (courtesy of the brewery) and kept a table for partners Tern Bicycles, and Greg Olson from Green Goat Designs, who displayed his handcrafted bicycle jewelry. 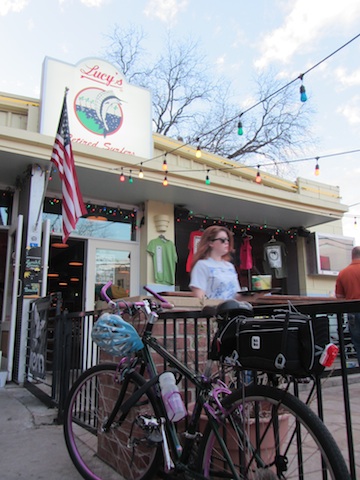 There were several reasons FrankenBike chose Lucy’s Retired Surfer Bar for its first event. The space was large, they have Independence Brewery brews on tap, and Lucy’s is working on revamping their focus and image in Austin. During this transition, Lucy's is reaching out to grassroots organizations in town that represent and connect to the personality of Austin. Mary McKeown-Christi, the marking manager for Lucy’s, said she has a strong interest in attracting cyclists and outdoor enthusiasts to the bar and wants to be seen as a place to relax, hang loose, have fun, and enjoy affordable food and drinks. When Mary was brainstorming ways to reach out the cycling community, she continually ran into FrankenBike as a top biking organization in town. She called Michelle and Chris and offered the Lucy’s venue as an event space. It coincided with Frankenbike’s new pop-up initiative and both agreed it would be best to do it early in 2013. Mary said, “It is a great way to kick off the year with a new vibe.” To make cyclists feel more welcome, Lucy's is also pairing with Bike Texas to install fun and funky bike racks on the property and plans to have them in by South by Southwest. 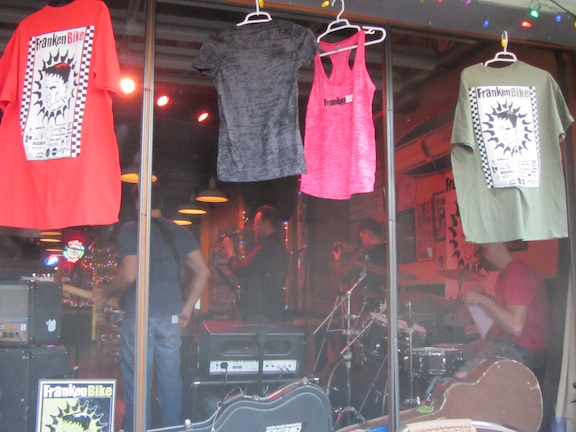 Michelle and I talked a little about safe drinking and riding practices, as well. Frankenbike promotes moderation and responsibility when drinking and riding your bike, and Michelle said that’s why they don’t do pub-crawl events. Even though drink tickets are provided to attendees of the pop-up events, they are limited per person. And if you find yourself too intoxicated to ride your bike safely, Michelle recommends calling a van taxi. They can take 2-3 bikes in the back, and fit as many bodies in the front. Better to be safe than lose your face.

The next Austin FrankenBike swap-meet (#92) will be March 27th at Austin's Pizza South Lamar location from 10am-4pm and is often followed by a social event. You can also find them at the Independence Brewing First Saturday(3913 Todd Lane) on March 2nd (cyclists get to cut in line!) And stayed tuned to their website for the next pop-up event.