Imagine sorting through a stack of bills and realizing how difficult it will be to pay them when you’re looking out at a near-empty restaurant. Welcome to restaurateur Rachel Davila’s world. The hard-working 77-year-old grandmother is fighting persistent rumors that her 31-year-old East Austin restaurant is already closed.

Looking back, Mrs. Davila realizes her generous heart is probably to blame for the beginning of the rumors. “I had retired in 2003 but had to come back to work in 2008 because of the economy,” she recalls, “and then two years ago, I put this property on the market. I sat down with my employees and explained to them that I was ready to retire and the property was for sale, but that I would let them know when any sale was final so there would be plenty of time for them to find other jobs.” Being so open with her longtime employees turned out to be a mistake; “I asked them if we could please keep this news between ourselves, in the family, so to speak, but that didn’t work out very well,” she says with disappointment. Since the spring of 2011, the rumors have flared up periodically; that the East Austin Tex-Mex mainstay was closing any day or already closed, depending on which social media site you were reading. Quoting a restaurant employee, the Austin American-Statesman even reported that Nuevo Leon had closed. And while that error was corrected within a week, the damage was serious. 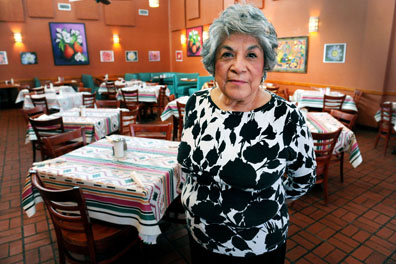 “It’s not bad enough that so many of my regular customers have been priced out of the neighborhood by their property taxes; having people think we’re already closed is just killing the business I’ve got left. I’ve got bills to pay and payroll to make until we get a final sale,” says Mrs. Davila, in obvious distress. Worrying about how to pay the bills is not a situation to which this woman is accustomed. Rachel Davila was born and grew up in the neighborhood near her restaurant and she’s one of the powerhouse Latina businesswomen who kept the neighborhood thriving over the past thirty years. Her history in the hospitality industry has been all about good business.

While she was still an executive assistant at the Southwest Educational Development Laboratory helping to develop bi-lingual curriculum for Texas school kids and raising a family of her own, Rachel Davila started the original Nuevo Leon in a smaller building at the corner of E. Seventh and Lydia in 1981. The restaurant was very popular, famous for their traditional Tex-Mex combo plates, crowd-pleasing margaritas, and grilled chicken fajitas. “I would go in very early in the morning and make the staple things before I went to the office,” she reports, “and then go back at night to close up.” The success of the first restaurant warranted expansion and, in 1999, Mrs. Davila purchased the former home of another legendary East Austin Tex-Mex eatery, Carmen’s La Tapatia, on East Sixth.

When the much bigger Nuevo Leon and its big parking lot opened in September of 2000, it was surrounded by small Hispanic businesses, produce houses, Tejano and Norteno bars, tortilla factories, meat packing plants, and warehouses. Once again, Nuevo Leon thrived. Mrs. Davila’s longtime neighbors dined there regularly, as did business types from Downtown and students from the UT. The margaritas were legendary. The patio would overlook the new Plaza Saltillo and the private party rooms hosted everything from bridal showers and rehearsal dinners to retirement parties and wakes. (My friend, the late chef Roger Mollett, and his partner Greg Murphy, loved to throw parties there; Nuevo Leon was where they bid goodbye to Austin friends before moving to the Twin Cities.) 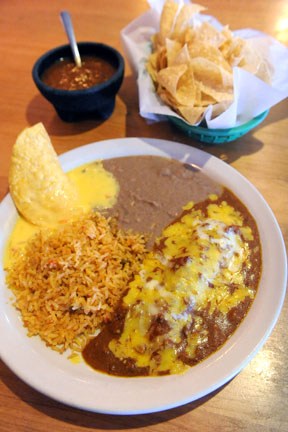 Even in Nuevo Leon’s heyday, however, changes in the neighborhood’s real estate profile were beginning to have an impact. Not only were longtime residents aging out or being priced out of the neighborhood, the city’s urban core was migrating east of the freeway with condo projects and hip new businesses to service them. A 300-seat restaurant became increasingly more costly to heat and cool. Tex-Mex combo platters, conjunto bars, and old school frozen margaritas are being replaced by galleries, music venues, Asian fusion tacos, and craft cocktails. “The new people around here seem to want to eat at the food trucks and the new places, but a few of my old customers that moved to Cedar Park and Leander have ridden the new train to the stop out there at the plaza and come in for margaritas,” she says, wistfully. “I was down here late one night after closing not long ago and I was just amazed at the amount of foot traffic on the street after midnight. I never thought I’d see that in my neighborhood.”

When I asked Mrs. Davila what life after the restaurant business would be like for her, she reminded me she was still very much in business. And while she thinks she might write a book about operating a restaurant in between gardening and spending quality time with her grandchildren, the savvy businesswoman still has an asset to sell and a payroll to make. There’s a combo platter and a margarita with your name on them, because Nuevo Leon is still open.