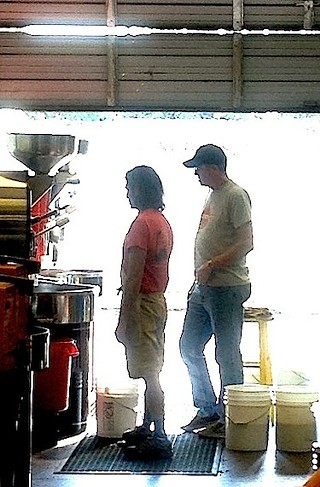 Red-Shirted Roastmaster (by PHOTO BY BRNNR)

Listen to a man who knows:

"Coffee’s not a bad industry – it’s a lot cleaner than restaurants, too. No grease, no drunken people at the end of the night, and that’s what I like. People who drink coffee may be a little odd, a little off on a tangent – but they’re not hard to deal with."

So says Joe Lozano, owner and chief roaster of Third Coast Coffee, as he keeps one eye on the two roasting machines he's got going in the back of his busy operation near the corner of St. Elmo & South Congress Avenue. Actually, the grizzled and canny Lozano is keeping one and a half eyes on those machines; the rest of the world is demoted to what's available in peripheral vision.

"What Joe's doing right now, two machines at once, requires a very specific level of focus and concentration," says company manager Clay Roper. "But years of experience have definitely made it to where it’s not, I won’t say rote, but where he’s very accomplished at performing this task."

With Lozano intent on the business at hand, Roper's the one showing me around the building's bright interior, introducing me to the people who work there, explaining the meaning of all the maps and documentation on the surrounding walls, pointing out the various outposts of machinery, the climate-controlled storage chamber filled with bags and bags of still-green beans, the cupping room, the front counter with its espresso machine, the roasting apparatus and buckets of cooling beans in the back of the shop.

"Joe’s been roasting in Austin since 1994," says Roper. "He was originally roasting as Los Armadillos Coffee and had a few different shops around town. Then in February of 2008, he and his partners bought Third Coast Coffee and merged the two companies, kept the same customer base, but brought their roasting philosophy – organic importing, the cooperative approach …"

The machines hum, the swirl of darkened beans rattles slightly against hot metal, shifting as the settling load is stirred by a mechanical arm. The smell of roasting coffee fills the room like light. Lozano watches the beans, checks the temperature display on the attached computer screen, sniffs the air near the machine's slowly turning drum.

"The style that Joe’s developed is primarily medium roasts," says Roper. "This focuses on the body and the mouthfeel of the coffee, but still respects the aroma, the acidity, the provenance of the coffee’s origin. We never want to ignore what the inherent characteristics of the coffee are, although we do influence them with the style that Joe’s cultivated over the years, that a lot of our loyal customers have grown to love."

I'm one of those loyal customers myself, I should point out by way of full disclosure: Third Coast Coffee has been steadily supplying coffee to the Chronicle for at least a decade now, is one of the reasons why dragging my ass into the office each morning is more of a reward than a devastation: The richness, the freshness of the Chron kitchen's dark and steaming pots of java make a man wanna voice a vigorous howdy-do to the first day of the rest of his life.

Figured it was time to check out where all this tasty go-juice comes from. Figured it was time to talk to the Joe behind the joe. Figured to ask the man why he got into the business in the first place. Was it an almost holy calling that pulled him into the industry? Was it the exotic allure of a product originating in the high-altitude earth of foreign lands?

He pauses, eyes the beans, offers further enlightenment: "I spent 23 years cooking in restaurants, so I know what that's like: It's for the young and stupid. And I had an opportunity to open something, I thought I was the hot shit and it wouldn’t be hard to roast coffee, so I said 'Sure, why not?'"

Austin Chronicle: And now you've been doing it for a while – almost two decades – so what is it that keeps you in the business?

Joe Lozano: Because I’m still challenged to produce something consistently. And the cooperative that we’re part of – I like that message on it, too. So it was more an evolution than a purposeful thing, and now I’m stuck in it. Well, not stuck … but when something integrates itself in your life and you find you’re still doing it after so many years, you can’t really say why, you just still like doing it. And the cooperative helped me with a lot of that, because you get more in touch with who’s producing the coffee. That kind of interaction, it kind of wears on your soul a little – and not in a bad way. You realize there’s more to it than just your little part. Because when I started out, the coffee was green, and I knew it came like that and I knew how to tell whether it was good or not, but I had no idea how it came off the tree or who picked it. I roasted four or five years before I got involved in the cooperative, and then I found out a whole ‘nother life went on behind these beans. And it still drives me.

["We’re a member of Cooperative Coffees," explains Roper as Lozano checks the two batches' progress, "a green-bean importing collective made up of 23 or 24 roasters throughout the U.S. and Canada. We’re independent coffee roasting businesses, but we’ve come to a kind of alliance through importing. We work with farming cooperatives around the world, which differs from the so-called “direct trade” in that we typically work with cooperative groups, not single-farm sources. The cooperatives can be a really strong force in the community, helping the community get access to financial and educational, health and sanitation resources; farmers in the coops, they’ve said it’s a really great benefit. The way it works, there are small families that have very small plots, usually it’s like they’re growing coffee in their back yard, and so several farmers in one area of a mountain will organize together and form a cooperative, and then several of those cooperative groups come together to form a cooperative union, and then they’ll export their coffee – and we import it directly through our cooperative and receive it here at Third Coast Coffee. We keep in touch with the farmers and the groups as close as we can throughout the course of a given year, taking the opportunity to visit, when we can, at the farm or cooperative level. Joe’s done a lot of work in Nicaragua, and in Honduras, Mexico, Guatemala, and Peru, doing workshops, training people how to sample-roast and cup the coffee, so they can get a better idea of the quality of their own coffee. A lot of times, farmers in this position don’t get that kind of information, that kind of feedback. When you grow a coffee plant, you can’t just pick a cherry off the tree and know what the final product is gonna be like – unlike an orange or a banana – until you process it through a number of different steps."]

Lozano: Roasting is still challenging, so that’s also why. Because I tend to get bored, so if something is still challenging me, I’ll stick with it to the bitter end. And, besides, who else is gonna put up with my ass, you know? Where am I gonna go and get a different job, where I won’t get fired because I run my mouth? That was the biggest problem in restaurants, because I always thought I was smarter than they were – which wasn’t true, either – but it makes me a bad employee. It's better for me to run a place.

Austin Chronicle: You run it and you roast for it?

Lozano: Hold on a second …

[He pulls a single bean from the swirling mass, rolls it between his fingers, scrutinizing]

Clay Roper: Right now we roast three days a week. Joe and Tom Novak are our standard production roasters, I fill in as necessary, and we’re training a fourth roaster. We’re able to take orders up to about one in the afternoon, and then those are either shipped that day or delivered to our local customers the next day.

AC: You’re training a fourth roaster. Is that indicative of business picking up in general?

Roper: Business is definitely picking up. The customers that we already have – Kerbey Lane, Dolce Vita, Strange Brew, and others – many of them are ordering more coffee, and, due to people talking about us and being pleased with what we provide, we’re always getting new customers. Most of our new customers come from word-of-mouth.

AC: It seems like the coffee business in general is pretty, ah, robust these days. Is there something besides the growing population of Austin that's driving the increase in demand?

Lozano: I think that the people who are buying coffee are more educated. All of us have been doing our bit to educate people on anything other than Starbucks – dark roast doesn’t have to be that way. The whole industry has been pushing that way for years, and now people’s sophistication levels have gone up. Even the average person knows a lot more about coffee than they used to, they know there’s really good coffee out there, and so now they’re looking for it.

AC: And here you are.

Lozano: And here we are.