As Mardi Gras was approaching, I assigned myself the task of locating several of the foods associated with spending time on the streets of New Orleans. That meant trying several renditions of King Cake, following up on beignet rumors, and tracing down restaurants and trailers who produce a local version of the hearty and soul-satisfying muffuletta sandwich. For the uninitiated, culinary legend tells us that the muffuletta sandwich originated at the Sicilian family-owned Central Grocery store in New Orleans’ French Quarter in the early 20th century. The muffuletta loaf is a large, dense, flat round that is vaguely similar to focaccia in texture. Once it is sliced, the loaf is filled with capicola, ham, mortadella, salami, pepperoni, Swiss and Provolone cheeses, and a serving of chopped olive salad that includes black and green olives, pimentos, celery, and carrots. Some shops heat the muffulettas to melt the cheeses. Traditionally, the sandwiches are wrapped in butcher paper and sold whole, in halves, or quarters. 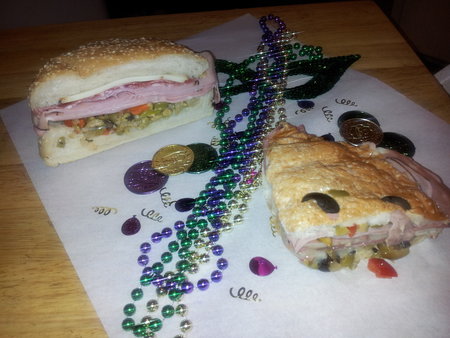 Turns out that a commercially-made beignet as good as the ones at Café du Monde or Morning Call is still on my wish list, but there were plenty of good King Cakes from which to choose this year, and lots of muffuletta options. Although I don’t know if NOLA natives or culinary purists would call them authentic, I found a few versions of muffulettas in Austin that brought back memories of a muggy day outside Central Grocery with a huge half-sandwich in hand, tangy juice from the olive salad sliding down my chin. Unless you swore off processed pork products for Lent, give one of these muffulettas a shot.

Central Market (both locations) I was somewhat surprised to find such a good muffuletta here, but once I thought about it, it made perfect sense. They make the bread in house, have access to the best quality meats and cheeses, and have a full olive bar from which to make olive salad. (And they stock my favorite commercial olive salad, Boscoli Family, right there in the store if I want to add more). The bread really made this particular muffuletta for me. It looked right, it tasted right. It’s a beautiful thing. One caveat; they make sandwiches for the chef’s café in the morning and when they’re gone, they’re gone for the day. Go early if you want to score one of these babies and grab a jar of Boscoli Family olive salad, just in case.

Bud’s Po’Boys and More (4209 Airport at Mueller) Chef Bud George’s excellent Louisiana-style fare drew hungry crowds to Shoal Creek Saloon for years and those who loved his food will be pleased to know he’s now in business for himself with a trailer set up in front of the historic Mueller hangar. Farmers’ market shoppers were lining up for Bud’s gumbo, etouffee, po’boys, and muffulettas even on a drizzly Sunday morning recently. (I’m going back for fried green tomatoes, crawfish etouffee, and a soft shell crab po’boy next week!) The thin, round loaf is from Phoenicia (they started making muffuletta loaves back in the late Eighties for a chain restaurant called Monjuni’s and never stopped making them, which is great for this sandwich renaissance), and it’s piled high with meats, cheeses, and olive salad. It’s a hot, delicious mess.

Austin Daily Press (1900 E. MLK) This dog-friendly new sandwich shop is part of a destination corner at the intersection of Chicon and MLK. Their Who Dat? sandwich is a tribute to the muffuletta with their own house cured mortadella (we hear ham and capicola are both in the works) as part of the meaty filling. The La Mexicana bun was not as substantial as I’d like, but the good meat and a very tangy olive salad earned this high marks for this sandwich.

Sambet’s Roadside Cajun Café (4801 Burnet Road) Doug Slocome is another guy who has gone from brick-and-mortar to a trailer recently so he’s serving a scaled down menu from the original Sambet’s Deli on Spicewood. His gumbo, etouffee, and red beans and rice are every bit as good as I remembered. The only thing missing from his good muffuletta was the buns they used to bake in-house. Right now, he’s using a big, soft baguette and his own olive salad, but I tipped him off to the Phoenicia deal.

Evangeline Café (8106 Brodie Lane) One of Curtis Clarke’s stellar muffulettas and a batch of homemade potato chips are worth every mile of the drive to far Southwest Austin.

Cypress Grill (4404 W. Wm Cannon) Never had anything but a wonderful muffuletta here. All I’ve got to say to Yelpers is if you think the sandwich is dry, politely ask for a little more olive salad and clear that problem right up, fast, chere!