Like a good Mexican, I love a raucous fiesta filled with music, dancing, and lots of good food and drink. So, it is no surprise that I have a strong affinity for all things Louisiana. I discovered Evangeline Cafe shortly after it opened in 2004, and there's still no finer Cajun-style fare or atmosphere in town. And apparently, many share that opinion.

Curtis Clarke, the Lake Charles native who took a chance on the tiny spot tucked in a far-off shopping center on Brodie Lane, is about to celebrate the tenth Mardi Gras at the beloved Evangeline Cafe. 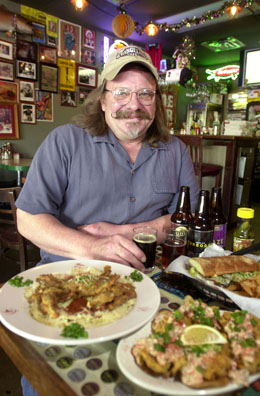 My husband and I know Clarke well — we are fortunate to live but 15 minutes away and we dine there every chance we get, from a quick but filling lunch to a leisurely dinner accompanied by a couple Abitas and a side of live music. And although it is usually packed on any given night, nothing compares to Mardi Gras. "It is our biggest night by far, every year", Clarke says with a smile that never seems to leave his face. "It is always balls-to-the-wall over the top." 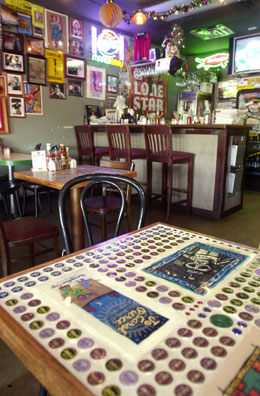 Because the small restaurant cannot hold the sheer number of people that keep pouring in throughout the day on Mardi Gras, Clarke started taking over the few parking spots directly in front of the restaurant, setting up a tent to accommodate party-goers who can't physically fit inside. For those who get there early, the restaurant serves its full menu on a first-come-first-served basis, but late comers can purchase a bowl of red beans and rice, chicken and sausage gumbo, or creamy crawfish Evangeline, as well as beer, in the tent outside. People often bring a truck, find a parking spot, and tailgate while listening to the live bands. 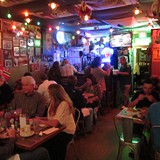 Curtis greets the crowd from the bar (Photo by Will Larson)

Although the official party doesn't kick off until 6pm, "people pile in for lunch just because it's Mardi Gras," says Clark. "Hell, we are having live music on Monday, which is now officially called Lundi Gras," he chuckles. Traditional Cajun musician Mark Viator will be doing the honors that night.

On Mardi Gras, the party starts with Gumbo Ce Soir, playing their own brand of traditional Cajun fiddle tunes, followed by New Orleans-style piano music from the Dan Holmes Group at 8pm, and closing festivities is the house favorite Charles Thibodeaux and the Cajun Aces.

Although loaded with fun, the Mardi Gras festivities at Evangline are a family-friendly affair, well-suited for people who want to have a great time without the obnoxiousness that often accompanies these parties elsewhere. Good food, good music, good fun – just right for me. Like the logo on the back of their t-shirts says: "Old Austin didn't die, it just moved South." Here's to another 10 years of les bons temps at the little South Austin Cajun cafe that brings Louisiana to Austin every day.