Beads; booze; drunks stumbling the street in feather boas and masquerade masks - it’s all part of the imagery accompanying the mystical convention of Mardi Gras in the city of New Orleans. Yet, for some, it's nothing like that at all.

Their Mardi Gras is rooted in mores unlike the rest; a carefully guarded subculture within a tradition and Austin chef Darold Gordon, of The Original New Orleans Po-Boy and Gumbo Shop, is at the front and center of the Mardi Gras Indian milieu. 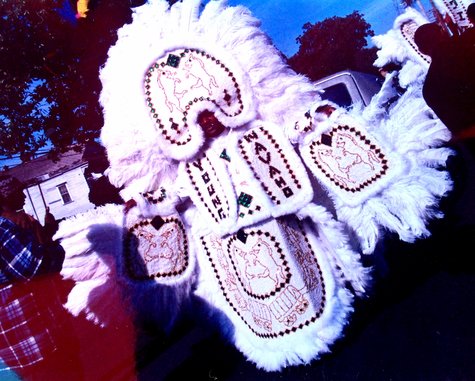 "Indians? I thought Mardi Gras was like, French or something?" you may be thinking. I used to think the same too, and the only reason I was able to recognize what the painting of "Big Chief Darold Gordon" on the side of his South Congress food truck meant, is from watching the HBO series Treme.

"Oh yeah, HBO interviewed me for that show," Gordon tells me when I explain that to him. The chef was the youngest chief to ever run a tribe down there, so the respect he garners is well known. "Tribes? Chiefs? Is she just misspelling chefs? What is going on?" Allow me to elaborate:

The Mardi Gras Indians are a tradition dating back to the days of slavery. Down in New Orleans, during its servitude hay-days, the native American tribes would take in renegade slaves. They welcomed them into their communities, taught them how to live amongst their people, and, most importantly, refused to give them away when the slave owners came searching.

"If it wasn't for them, a lot of us wouldn't be here," Gordon claims. "Our ancestors, our grandparents - they wouldn't have made it. Their people actually died for us."

Not being allowed to participate in mainstream Mardi Gras celebrations, the outcast African Americans created their own krewes - the Indians. As a way to honor their protectors, the ex-slaves pulled from their knowledge of traditional Indian dance, dress, and chant to create a custom consisting of extravagantly beaded ostrich-feather costumes; battles for who performs best; and songs for the tribes to sing. All year round, they work on perfecting their tribal movements and, most importantly, their suits. The suits need to be dazzling, especially if you're the chief. It's the centerpiece of the show, and so significant to them, they actually make a suit solely to be buried in.

"Before I even finish one for the year, I already know what I'm making for the next. When you're born and raised into this stuff, it doesn't leave you alone," Gordon says.

The hours of practice and thousands (yes, thousands) of dollars spent on preparing costumes culminate into battles, where things such as dance, drumming, and costumes are judged. Tribes from different neighborhoods (Darold's is from the Seventh Ward) will go out into the streets and send out "spy-boys" to seek other tribes. When one spots another, they yell out:

"I'm the spy-boy! Young Navaho! State your name!" The other spy-boy responds with his tribe name, and then, after passing through several ranks, the chief is alerted and will decide if he wants to engage or not. This is communicated with the wave of a krewes flag.

Only the tribes get to know each others ways. In fact, the custom used to be so secretive, they only started to come out of their neighborhoods and show themselves to the public in the early Nineties. It became important for them to share this part of history with the world, and that is something close to Gordon's heart. When he was still in New Orleans, he'd open his tribe’s practice to the public on Sundays.

Gordon established his own krewe at the age of twenty-four, when the one he was originally "masking" for took a break. Not wanting to stop, he was granted permission by the elder chiefs (you respect the ranks) to begin the Young Navahos.

"I chose the Navaho because I liked what they stood for. When the white man came to buy their property, they ripped up the check and said, 'no sell out.'" The bottom of his chief stick boasts these words.

Born and raised in New Orleans, Gordon was happily running a bar/restaurant and keeping charge of his tribe until August 28th, 2005 - the day he evacuated for Hurricane Katrina. When he went back, absolutely nothing was the same.

"Life comes at you fast. How we're sitting here," he gestures to the SoCo trailer park, "imagine we came back tomorrow, and it was just an empty lot."

Despite his restaurant and community being washed away, Gordon stayed in New Orleans for the next two years, helping rebuild by redoing houses and opening a carwash. Things weren't moving fast enough, though. And with a wife and kids, it became clear he had to relocate in order to establish himself again. Hence, he landed here in Austin eight years ago, opened The Original New Orleans Po-Boy and Gumbo Shop five years ago, and has been stationed on the coveted SoCo lot for the past two. Despite the distance, Gordon is still the chief of his tribe and deeply entrenched in the Mardi Gras spirit, which, as tradition calls, is centered on indulgence. 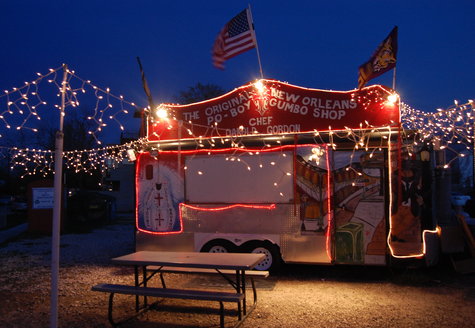 Gordon's trailer always boasts local, NOLA flavors. When I first moved to Austin, his oyster po-boy was one of the first food adventures I had, and as I ate, I remember thinking, "Oh yeah. Moving here was a great choice.” For the upcoming celebrations, he'll be making traditional red beans and rice, chicken and sausage jambalaya, and his "must have" crawfish étouffée.

The Original New Orleans Po-Boy and Gumbo Shop will be a place that transcends the food aspect of Mardi Gras, though. Sitting underneath the string lights, next to a circus-esque trailer whose sign boasts, " Home of Shucking Heads and Eating Tails," you'll hear the notes of authentic Crescent City sounds, making a little NOLA bubble within our Austin one. On Fat Tuesday itself, Gordon will also be passing out beads and the traditional, coconut Zulu masks of Mardi Gras.

"If you go to New Orleans for Mardi Gras and don't get a coconut, then shame on you! You can't leave without a coconut," Gordon states with a grin.

This year you don't even have to go. You can just visit the Big Chief. And if you're lucky, it might be one of the special years he's able to put his Big Chief suit on display. No promises there, though, that’s left to the mystique.