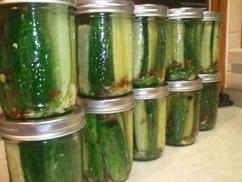 Jars and Jars of Pogue Mahone Pickles
It’s been an amazing week for Austinite Sam Addison: First, he won one of the prestigious Good Food Awards for his Pogue Mahone Jalapeno-Mint Pickles, then, on Saturday, he was the student speaker (think valedictorian) of his graduating class at Le Cordon Bleu College of Culinary Arts at Austin.

"Winning the award was definitely part of why I was asked to be student speaker,” says Addison, “I graduated with high honors, of course, but also the school wanted to present that there are other career paths open to culinary graduates besides working in a kitchen. Such as starting your own business!”

This is the third year the (very prestigious) Good Food Awards have been handed out in San Francisco, recognizing outstanding achievement in “tasty, authentic, and responsibly produced” food products. This year, several Austin businesses received awards, among them Addison’s Pogue Mahone Pickles, which are sold at the Cedar Park, Muelller, Barton Creek, and Lakeway Farmers' Markets. 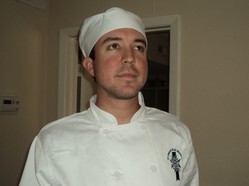 Sam Addison in his cooking whites
Addison began making pickles about twelve years ago when he was living in Virginia. “I have always had a garden,” says Addison. “No matter how small the garden, at a certain point you have a bushel or more or cucumbers. They are just so prolific!” He began pickling cucumbers in his teens, and by his own admission became obsessed with the process. “I would make each kind of pickle again and again, taking copious notes on the process. I have crazy notebooks going back twelve years, just full of madness!” he laughs.

At present, Pogue Mahone makes three varieties of cucumber pickle: Fresh Dill and Garlic, Jalapeno Mint, and Ginger Habanero. It was the Jalapeno Mint that won a Good Food Award in the Craft Pickle category.

“Of all my pickles, I was the most skeptical about the Jalapeno Mint,” admits Addison. “A better name might have been Fresh Jalapeno, because there is just enough mint to give the pickles a splash of freshness. But I have been selling out every weekend at every market … everyone loves them!” 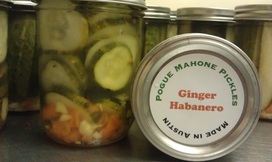 Ginger Habanero Pickles
Addison sources his cucumbers locally. The cucumber season is so very very long in Central Texas, for most of the year he has his choice of many pickling varieties grown by local farmers. Now, in January, he is planning to buy his spring cucumbers from the hydroponic Wild River Farm, who grow English cucumbers throughout the winter. Come summer, Addison plans to use several popular pickling varieties, including Bushmaster and Middle East Prolific.

The company name comes from one of Addison's early business encounters. Addison’s website states: “A wonderful Irishman once told me, 'These are the best damned pickles in the world. Anyone who disagrees can pogue mahone!'" 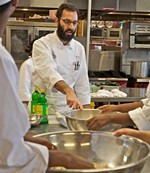