What if an entire city could feed itself with healthy, organic produce from local farms? Local filmmaker David Barrow poses this question in a documentary focusing on Austin's vibrant and expanding urban farms, farmers' markets, and sustainability minded community.

Barrow, a Texan native and Austin transplant from San Francisco, was attracted to Austin for its diverse culture and quickly growing local food scene. His first forays into exploring the local food community were accomplished through ventures such as the Homegrown Revival, an event series showcasing local food that is a joint effort of chef Sonya Cote', Barrow, and area food producers; participating in photo and video projects such as filming chef Cote's events; and pursing a locavore lifestyle. With Farm-City, State, Barrow's natural progression is to explore whether or not we actually could feed the whole city with locally grown produce. In addition to area urban farmers and chefs committed to local food sourcing, the film's trailer includes interviews with members of the Austin food community, such as: 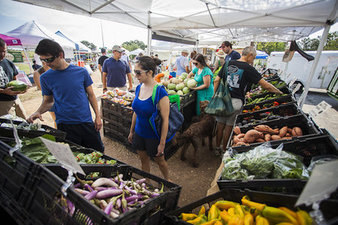 Brenton Johnson, of Johnson's Backyard Garden, easily the largest grower and supplier of organic produce to the local community through its community supported agriculture (CSA) program, farmers' market booths, and sales to restaurants and grocery stores

Judith McGreary, of the Farm and Ranch Freedom Alliance(FARFA), a lobbying organization that represents the interests of small farmers and ranchers

One of the aspects of the film I'm most excited about is guiding a family of five as they attempt to transform their very non-local diet for one month, navigating the switch to shopping at farmers' markets and local farms. I was invited to assist them because of my extensive personal experience with this situation. I'm hoping viewers learn a lot about handling the financial aspects of sourcing their food locally, switching to a truly seasonal diet, and dealing with the relative lack of convenience of truly eating locally. 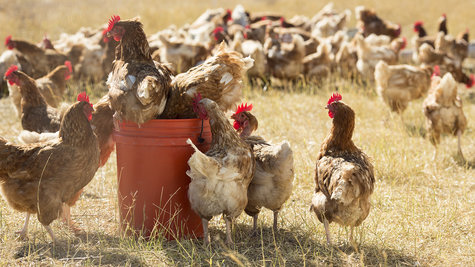 I'm also curious about how the film tackles the distribution aspect of getting local, organic food to a city the size of Austin. Solving the problem of efficient and affordable distribution is an important component to a farm's success. Barrow says the film will consider the extensive distribution system of one local farm and speculate about how other farms might do something similar. In addition, Barrow expects to address the political implications and spacial considerations that undoubtedly come into play when tackling such a lofty endeavor as feeding a city. I'm hopeful that the film will educate the viewers about where their food comes from, and also inspire other communities to look at the same issues.

The producers of Farm-City, State are seeking community financial support through an Indiegogo campaign as they continue the project. More funding, of course, means wider distribution and that ultimately means more education. To see the most recent version of the trailer and support this film, go here.

Full disclosure: I was invited to contribute this blog post because of my personal experience with eating locally and the fact that I will serve as a guide to the family featured the film. I stand to gain nothing from it, aside from pride in our community, and joy in its success.