Markets back to normal after the Holidays 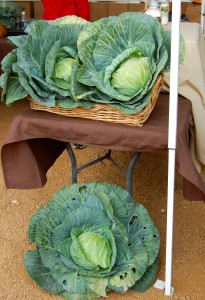 Magnificent Cabbages at Mueller Market (Organicare Farms)
Last Saturday and Sunday mornings were freezing cold, but this weekend it is supposed to go up into the sixties which should be more pleasant for everyone.

In general, shoppers tend to be warmly dressed, it is the poor vendors who often seem to be underdressed and shivering. (Especially at Mueller Farmers Market … I think the hangar creates a wind tunnel effect or something!) Well, this weekend should be warmer! 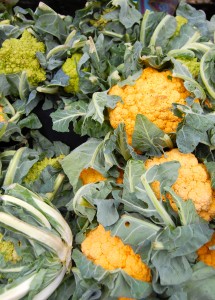 Green Romanesque and Cheddar Cauliflowers, Johnson's Backyard Garden
It was difficult to say exactly what vendors would be at the markets last weekend, it being the Holidays and all. But this weekend everyone should be back, with surpluses to sell. I expect there will be bargains galore!

Chicken News: Dewberry Hills Chicken will only be at SFC Sunset Valley this weekend. Dewberry Hills' Jane Levan writes, "The birds take a little longer to come up to size when it’s cold and dark." Peeler Farms  should be at the HOPE market this Sunday (they only come every other week.) Peeler Farms sells chicken and beef, and very occasionally, duck. Dai Due Butcher Shop is selling Boudin Blanc sausage ($12 a lb), made from Dewberry Farms chicken, Full Quiver Farms pork, cream, breadcrumbs, spices, parsley and lemon zest.

Speaking of HOPE Market! I incorrectly stated that they open at 10 am on Sunday. Total misinformation on my part! They actually open at 11am. Their hours are 11am-3pm. 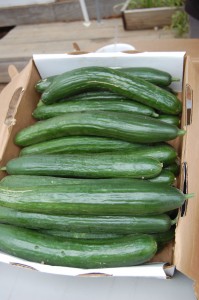 Hothouse English cucumbers, HOPE Market (Wild River Farms)
Dai Due will also be selling a variety of winter sausages (including Venison Zweibelwurst, Toulouse Sausage, Venison Breakfast Sausage, Wild Boar Chorizo, and Country Style Breakfast Sausage) and their positively amazing locally made mincemeat. I myself am on record as a mincemeat fan, and I must say Jesse Griffith’s version sounds like it is probably the best mincemeat on Earth. Here is their description:

Traditional Mincemeat: Starting in May, we begin to make the mincemeat by drying sweet sugar figs (Rain Lily) and wild mulberries. Organic peaches are next, in late June, and are dried, followed by pears and jujubes in late summer. When the weather first turns cooler, it is time to finish the mincemeat before the window closes: fresh apples and more pears are brought in at the last minute before their season ends, just as the first citrus and pecans show up. The apples are diced, the citrus juiced and supremed and candied. The pecans toasted.  All of this is then slowly cooked for hours with spices like clove, black pepper and cinnamon, silky beef fat, a little salt, organic sugar and local honey. Once deeply browned and incredibly aromatic, the pans are removed from the oven and bottle after bottle of brandy is poured over the hot fruit. The mincemeat is then cooled, aged for a month and jarred, ready to be eaten or kept for a couple of months in the refrigerator. One quart makes one pie.

As a baker, I have to say that one quart is enough for at least two pies. I have a quart in my icebox right now, which I will be making into tarts as soon as I am over this virus, which I have, along with half the town it sounds like! 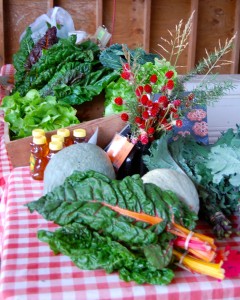 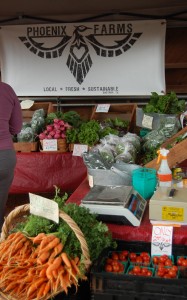 In the fruit department, STAR Farmers Market (Barton Creek and Highland Mall) have early strawberries (which are super sweet, due to the cold) and if the citrus guys show up (they didn’t last weekend) there should be tangerines from Orange Blossom Farm (Barton and Highland) and grapefruits and oranges at all markets, at the JBG stands.