Southern food traditions and recipes to ensure prosperity in 2013

In the Deep South, three dishes are requisite fare on New Year’s Day, and the enduring popularity of all three is based on not only on culinary superstition and food symbolism, but the on fact that the ingredients for all three dishes are cheap and abundant.

Cornbread is colored gold, symbolic of riches and fortune; it also rises as it cooks and increases volume, which signifies increasing wealth. Collard greens are, of course, green, suggestive of folding money. Green is also the symbolic color of hope, and a color associated with natural growth: the new buds of a tree or new shoots in a rice field, for example. Black eyed peas, AKA “cow peas”, were grown in the rest of the country to feed cattle, but in the South, they are a drought-resistant food staple that thrives in the hottest part of the summer. We Southerners love our black eyed peas, and the good luck symbolism is apparent; they swell up when they cook, greatly increasing their volume, much as you want wealth to expand during the coming year. 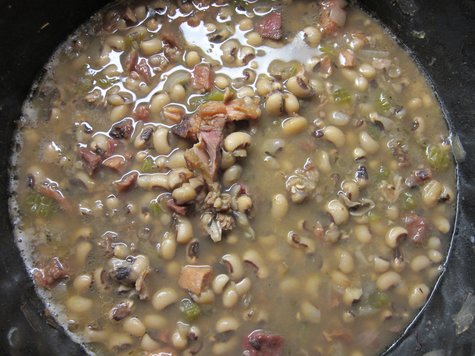 In the South, we cook black-eyed peas with smoked ham hock, salted hog jowl, bacon, or pork sausage. Nothing expresses prosperity in non-Jewish and non-Muslim cultures like the pig. Pigs root and feed going forward, symbolizing progress without dwelling on the past. Pigs can feast on scraps, bear many young, and yield lots of meat, much of which can be preserved for later consumption; fatty meat equals a fat wallet. One popular New Year's Day Southern American dish is Hoppin’ John, triple-blessed since it includes black-eyed peas, rice (the many grains signify abundance, and it swells as it cooks), and ham hock. A shiny dime is often thrown into the Hoppin’ John cooking pot, and the person getting the dime in their bowl is due an extra portion of good luck. On the day after New Year's Day, leftover Hoppin’ John becomes Skippin’ Jenny, and eating it demonstrates powerful frugality, bringing one even better chances of prosperity. Lots of Southerners believe that you’re supposed to put a face-up coin under the bowl of peas, or throw a coin into the pea cooking pot, so the person finding the coin receives extra luck. 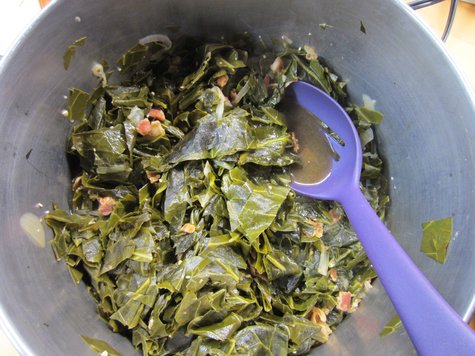 Call it food for cows and farm animals if you want, but the triumvirate of peas, greens, and cornbread is not only a triple threat luck-wise, but absolutely freakin’ delicious when it hits the table. As for bringing good luck, who can say? All I know is that it can't hurt! For more information about New Year’s good luck food superstitions around the globe, go here. You’ll see some definite trends emerge, regardless of the cuisine or culture.

This recipe originated with my pal Chef Ray Tatum, proprietor of Austin’s excellent Three Little Pigs trailer, but over the years it’s been modified considerably. You can use all-white or all-yellow cornmeal if you like, or mix them in any proportion.

If you don’t have any buttermilk, you can fake it by these methods: • Add 1 tablespoon of vinegar or lemon juice into enough regular milk to equal 1 cup. Allow this mixture to sit for 10 minutes to give it time to thicken before adding it to the ingredients. • Or mix plain yogurt with whole milk. To make 1 cup buttermilk, mix 3/4 cup yogurt with 1/4 cup whole milk.

Preheat oven to 425°F and place a cast iron skillet inside. In a large mixing bowl combine all of the dry ingredients and mix well. Add the oil, buttermilk, and eggs and incorporate, mixing just enough to blend the ingredients. Fold in the jalapeños, corn, and scallions. Remove the skillet and lubricate liberally with lard, bacon fat, butter, or vegetable oil (lard will give the best flavor and a crispier crust). Scrape the contents of the bowl into the skillet and lightly smooth the top. Bake for 30 to 40 minutes; if the optional ingredients have not been used it will take about 30 minutes; if they have been used, expect 40 minutes. The top should be golden brown and a skewer inserted into the middle will come out clean. If using, the cheese should be sprinkled on when the top of the cornbread almost reaches the light-golden stage. Serves 8.

A pot of collard greens is always referred to in the South as a “mess of greens”, and the vitamin-rich, bacon-seasoned savory broth in the bottom of the pot is called potlikker. Traditionally the white plantation owners of the South consumed the cooked and drained collard greens while the slave cooks, who understood the high nutritive value of potlikker, saved the broth to supplement their family’s diets. Nothing is better for soaking up the potlikker than a hot piece of crusty cornbread that’s been split down the middle and slathered with sweet butter.

The Great Potlikker and Cornpone Debate in February and March of 1931 pitted Julian Harris, an editor at the Atlanta Constitution, against Huey “The Kingfish” Long, the backwoods populist governor and soon to be U.S. senator-elect from Louisiana. The traditionalist Harris contended that Southerners must crumble cornpone into potlikker, criticizing Long as an unrefined rube, who contended that the corpone should instead be dunked. What started as a lighthearted fluff piece in the paper turned into a 23-day long news event that captivated the South (and the nation), and ended up dealing with all manner of cultural affairs, including race, gender, class, and regional chauvinism. For what it’s worth, we prefer eating our potlikker-soaked, from a solid block of cornbread, eaten with a spoon.

3 to 4 tablespoons Balsamic vinegar, to taste

2 to 3 tablespoons white sugar, to taste

Cornbread to soak up the potlikker

In a large stock pot with a lid, sauté the bacon over medium low heat until the fat is rendered and the bacon golden brown. Add the onion and sauté over medium heat until transparent, about 5 minutes. Add the garlic and sauté 30 seconds. Add the collards and stir well, briefly sautéing the greens in the bacon fat. Add the chicken stock, stir well, and place the lid on the pot. Allow the greens to cook down for about 20 minutes, stirring occasionally, and add 3 tablespoons of the vinegar, 2 tablespoons of the sugar, and 1 teaspoon of the black pepper. Stir well for a minute and taste for seasonings. The broth should be rich from the bacon and stock, there should be underlying saltiness from the bacon, and the vinegar and sugar should add a subtle sweet-tart flavor. Cook for another 5 minutes and taste again, adding more vinegar, sugar, and pepper if desired. Do a final tasting for salt just before service. Serve in a bowl with plenty of the pottliker. A piece of crusty hot buttered cornbread makes an excellent accompaniment. Serves 4.

These black eyed peas are made using a smoked ham hock, but a leftover meaty bone from the holiday ham also works real nice. In a pinch you can use smoked sausage, a quarter pound of some good, thick-sliced smoked bacon, or even a rinsed slab of sliced salt pork. Fresh black eyed peas are always best, but finding them this time of the year is nigh impossible, so frozen is preferred over canned. Generally the “fresh” peas you find in the produce section of your supermarket around New Year’s are just dried peas that have been soaked and reconstituted; you can do that much more economically on your own.

Add cooked rice to these black eyed peas and the dish becomes Hoppin’ John, a dish popularized with the slave laborers in the Old South. Slaves were imported from rice-producing West Africa to work the rice fields in the Low Country and Deep South, and black eyed peas and field peas were grown to provide a cheap, plentiful crop to feed the slaves and the cattle. The slaves stewed the peas and rice together as they had in their native Africa, and the dish became popular in the period between Christmas and the new spring planting, when the fields were fallow and the laborers were given some much needed time to rest. Many speculate on the origin of the name of the dish, but no solid historical evidence has surfaced.

5 cloves garlic, minced or mashed into a paste

2 to 4 jalapeno peppers, minced (seeds and ribs removed for less heat if desired)

Place the black-eyed peas in a stock pot and add the chicken stock, 2 cups of water, ham hock, garlic, onions, celery, carrots, jalapenos, salt and pepper to the black-eyed peas and bring to a boil. Let boil gently for about 10 minutes and skim any scum that rises to the surface. Reduce heat to a low simmer, add the bay leaf and thyme, and cook while stirring occasionally, covered, for about 1 hour and 15 minutes, or until black-eyed peas are tender. Remove the ham hock, let it cool enough to handle it, and remove any good meat from the bone, shredding it and adding it back into the peas. Serves 8.