Christmas shopping at the farmers markets 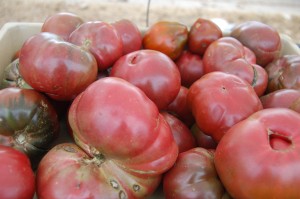 Cherokee Heirloom Tomatoes at Sunset Valley
It’s the last weekend before Christmas, so all the Farmers Markets will be expanded with additional arts and crafts vendors offering awesome handmade gifts, including jewelry, handmade clothes, gorgeous pottery, and even urban chicken coops.

Barton Creek Market will also have Lisa Adkins Handwoven Baskets (a perfect gift for the farmers market shopper!) And of course, food gifts will abound; Confituras will be offering Holiday Jam Boxes at Sunset Valley, Downtown, and at the Mueller Market on Sunday; and lots of other jams and preserves will be available from literally a dozen other vendors as well. 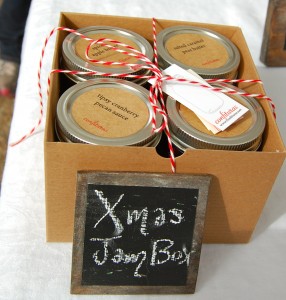 Xmas Jambox (Get It?) from Confituras

Two chocolate vendors I would like to specifically endorse: Edis’ Chocolates at Barton Creek and Cocoa Puro Chocolates Downtown. Edis Chocolates are a great treat for Christmas – truffles, mousse, and nut clusters are all made from Callebaut chocolate and are delicious. Cocoa Puro makes simply amazing triple dipped cocoa beans; they have won multiple national awards and they make a great stocking stuffer.

The Barton Creek Market and the Highland Mall Market have added a new vendor, Wright Longhorn Beef. I must admit I am awfully curious to taste real Longhorn, like they ate in the days of the Republic. I believe Longhorn is leaner than standard breeds; more on this later after I try some!

In a rare appearance, the Austin Mandolin Orchestra will be performing at the Barton Creek Market on Saturday. 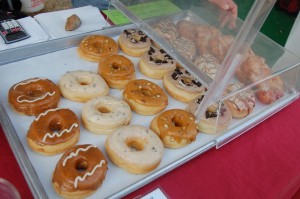 Red Rabbit Doughnuts (they are big, too!)

Red Rabbit Cooperative Vegan Bakery (Downtown Saturday, Mueller on Sunday) have been getting a lot of press for their vegan doughnuts, and last week I finally tried one (a vanilla and lavender frosted.) These doughnuts are every bit as good as they look and then some, highly recommended.

Dai Due Market Brunch: This week, Jesse Griffiths and Co. will be making Biscuits and Gravy, Chicken Club Sandwiches, Tortilla Soup, and Duck Chicharrones Tacos at the SFC Downtown Market, and Shredded Boar Tacos, Grilled Cheese Sandwiches, and Egg and Chorizo Tacos with Red Chile Salsa at the Mueller Market. I have had the Egg and Chorizo Tacos, and they are incredible; a Dai Due breakfast is pretty hard to beat.

The Dai Due Butcher Shop (things you have to cook at home) will be selling Duck stuffed with Bacon and mushrooms, Traditional Mincemeat, Boudin Blanc, Lard, and several varieties of handmade sausage (including Venison Breakfast Sausage).

Peeler Farms will be selling their worth-the-trip chicken at the HOPE Market this Sunday (thus guaranteeing that I will be there!). As far as I know, Peeler Farms sells the only boneless, skin-on chicken breasts of all the chicken vendors; they are at HOPE every other week. Speaking of every other week, Celtic Seafare will not be at the Barton Creek Market this week, it’s their “off” week. 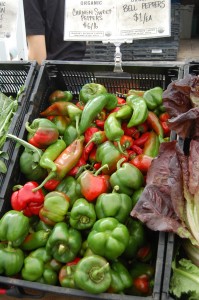 The last of the peppers (Johnson's Backyard Garden)

I know I have been going on and on about pepper season being over, so stock up if you see any. Well last weekend just about every vendor still had sweet peppers (and one had hot peppers!) and I started thinking, well maybe I am just wrong about this! But not being able to deal with the concept of my being wrong, I asked the vendors, are these peppers from a greenhouse? Or did you pick them before the freeze or something? And it turns out that, yes, all the pepper plants are dead and no one grows them in greenhouses, and they had all been picked the previous week. But! 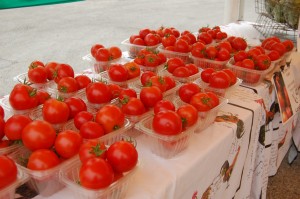 No so with tomatoes. Lots of area vendors grow hothouse tomatoes all winter (especially down Fredericksburg way). Generally speaking, they are gorgeous and taste great, since the cool weather causes them to taste sweeter than the summer tomatoes.