Cozy, smoky, quaint, and a magnet for fines

Lala's is something of folklore – the jukebox is award winning; the Bloody Mary's a cocktail legend. Elves strung above the bar dance any time the bathroom door they're attached to moves, and the interior evokes a vintage feel from aged knick-knacks and military hats on the wall. 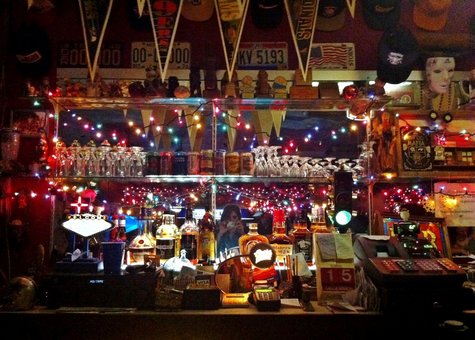 Behind the bar at Lala's (Photo by Carly Yansak)

I walked in and was met by the soft glow of colored string lights. It was dim, but the warmth of Christmas illuminated the place. I took a seat in a high-backed chair and waited for a drink. I had heard of the bar years ago; word gets around when you're featured in magazines like Rolling Stone and GQ. I wasn't sure what to expect because, well, decorated for Christmas? All year round? It almost felt wrong to visit during the holiday season.

I sat on my perch and quietly drank Bailey's, finding enjoyment through observation and comfort through the space's inherent charm. "You having a good day so far?" Bill Greig, the bartender, asked amicably.

Handwritten signs were taped on the walls everywhere, boasting a statement I found interesting: "THIS IS A NON-SMOKING BAR. We do not provide ashtrays. Be considerate of your neighbors and do not ash on my floor." It was curious; almost as curious as the back table shaped like a piano. A Santa-Clause-Snoopy doll on the top prompted me to ask Bill a question, "Why did she [Francis Lala, owner/founder of the bar] keep the decorations up?"

"After Christmas in '72, she took them down then put them back up because she thought the bar looked too bare without them," he shrugged. I eagerly asked more questions, dying to know what was up with the smoking signs. My curiosity would soon be satiated. "They're trying to change things," Bill told me.

The signs are part of a smoking ordinance in Austin. With smoking in public places banned, there are certain steps businesses must take. The first one is to put up signs and take away ashtrays. If someone does start to smoke, the establishment must remind him or her immediately that it is a non-smoking venue. If they light up after that, they need to be informed they are subject to receive a ticket. So on, so forth.

"My favorite is the last step'," Bill said. "It tells you to treat it like it is any other illegal substance." Aka, tobacco ≥ meth.

The fact people still smoke inside at Lala's is part of its ambiance, mystique, and character. I don't smoke, and I think it's ludicrous people continue to do it, yet that was one of my favorite things about Lala's when I first visited. It was part of the experience, and made the space unique and timeless. For all I knew, it was that '72 winter the decorations never came down.

"Nobody has ever complained. If they don't like it, they walk right out. You know what you're getting into if you come in here." Bill spoke of regulars who are judges, lawyers, and community volunteers who come and enjoy their cigarettes. It isn't state law you can't smoke within a bar, but a city ordinance. It originally stated only the individual smoking would receive a fine, but a recently added clause says the businesses will now receive tickets as well. With the new rules, the Health Department has been visiting Lala's with a higher frequency (at least four times this month). If they walk in at any point during the laid-out steps of smoking prevention, but a cigarette is still lit, they can write a ticket. It wouldn't matter if Bill had just walked away from the table after trying to stop it.

"I mean, I get it, and I'm not saying to turn the whole movement around. We put up the signs and follow the rules, but it's almost impossible to enforce. The fines are unfair to the business." He proceeded to explain that he's told people not to smoke only to see them lighting back up 20 minutes later. "They don't say you have to kick them out or confiscate anything, so what else can I do besides tell them?"

A moment later, a boisterous group of people flooded the bar and Bill slid over to serve them. A grown man in a reindeer costume did a makeshift break dance, and through the clamor I heard someone ask, "Do you sell cigarettes?"

"No. You can't smoke in here anymore," Bill replied. 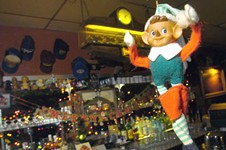