As she speaks, I watch her concentrated facial expression. She's skipping no beats, so her statements are serious but natural, and by the cadence of her voice, I can tell as much passion goes into her words as into her food. My partner in conversation is Kristine Kittrell, the new executive chef of Mulberry in Downtown Austin. 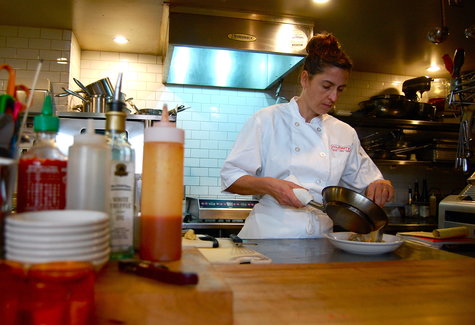 "Everyday, I learn something new," she tells me. "Or everyday I read Ideas in Food, or cookbooks, and restaurant reviews, and menus from all over the world so I'm just constantly getting new information and ideas that inspire another idea."

"New" is something we'll be seeing a lot from Mulberry. After taking over only six weeks ago, Kristine has made the menu her own, with only a few exceptions.

"There are signature items that have been here since the place opened (Devils on Horseback, the Foieberry Burger) and they are what makes Mulberry, Mulberry. I wouldn't dream of touching them."

But besides a few staples, Kristine has used her carte blanche on creativity to change the entire menu. Her inspiration is internationally influenced and is even the root of her love for food. In her mid-twenties, she attended a birthday dinner that would alter the course of her entire future; the dishes served there contained exotic flavors and ingredients she had never tasted before, awakening her palate to all the possibilities of food. It was this moment that solidified what she was meant to do - cook.

Staying true to this catalyst, Kristine travels extensively and makes it a point to take cooking classes anywhere she goes. She has staged in Spain and Vancouver, and visits restaurants she admires any time she is in a different city. Although she is guided by global cuisine, she still has certain favorites.

"I love Mediterranean flavors and classic French execution," she says. "All my sauce-making is French in execution, but not necessarily in flavor… I feel like I have a playful style." This playful characteristic of her cooking is going to greatly benefit diners, as it's a driving force behind her vision for Mulberry.

"I want people to come in and have a flavor combination that maybe they've never tried before. It's not going to be molecular but it's not super traditional, either. I think that's what makes it fun!" Fun - she used the word extensively throughout our conversation, making it clear her work is truly her passion.

While she will strive to surprise, she will never forget to please. The people who come in to eat are her greatest critics, and the ones who sometimes call the shots.

"I had a salad on here with baby romaine and it just wasn’t selling. So I changed it. And now the new one is flying out the door," she explains. "So it's seeing what the public that dines here wants, and trying to find my way with them." This task can be daunting when creating a menu from your own concepts. It's vulnerable, risky, and gives critiques a more personal edge to them. Kristine has a built-in defense, though: humility.

"You need to have confidence and courage to believe in your own ideas, but you also can't have an ego about it. You need to accept when something is wrong and realize, 'I'm fallible'."

It took her years to hone the skills necessary to create her own menu, and she attributes much of the credit to the six years she spent working at Jeffery's under her two mentors, Alma Alcocer-Thomas and David Garrido. The kitchen environment they created was collaborative, so when one person proposed an idea, they all came together to make it work. It's a framework she's hoping to build at Mulberry.

"I really love to surround myself with people who think about food, you know? I think that people can learn to cook, but they can't necessarily learn how to think about it."

With that being said, I wanted to know what Kristine thought of her own food. If she were to sit down to dine in Mulberry, what exactly would she have? It goes as follows:

She struggled to choose in each course (they’re all so lovely), but especially the entrées. Ultimately, the coq au vin won because of its uniqueness. It is not your traditional, red wine based, mushroom-driven dish. Kristine displays her playful, experimental side by using a white wine based brine containing lemon, honey, mirepoix, fennel, and ginger. There are apricots and sweet potatoes, herbs from start to finish, and the creative presentation of serving the finished product in sliced medallions. 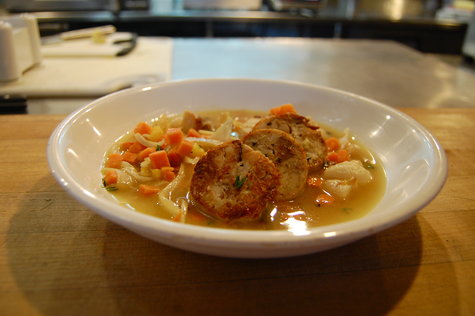 Her ganache is another distinct item, combining two flavors I would have never thought to put together: chocolate and olive oil. But these unexpected twists are what will shape Mulberry's identity under Kristine's imaginative style, as well as give us a place to continually anticipate.

"I would like it to always be changing and have people curious to see what will come next," she says of her vision. "I want to stay current and I also need to stay entertained. I can't make the same thing back there over and over again, everyday."

I have the feeling we'll thank her for that. 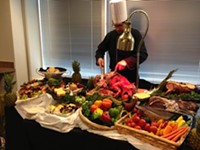