Aaron Franklin back as a judge on reality cooking competition show 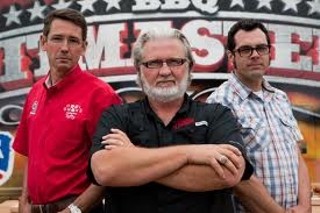 After making the switch from The Learning Channel to the Destination America Network, BBQ Pitmasters’ new season starts up this evening. This season will showcase 15 of the country’s top competition and restaurant barbecue experts butting heads, and Austin's own Aaron Franklin is once again one of the judges.

Each episode features three cooks working side-by-side in a stand-alone battle, a new feature this season. Imagine barbecue as a smoky sporting event, with a generous helping of good-natured smack talk; it’s a revealing peek inside the wildly popular U.S. regional barbecue subculture.

Every week, three competitors will be cooking a style or meat representative of a specific region, and unlike previous seasons, there will be no curve ball dish thrown in to see how they handle added pressure. The show really shines at revealing all of the tricks and nuances employed by the cooks as they compete against each other, and this year's regional approach should be a great enhancement.

BBQ Pitmasters' all-star panel of judges is chaired by series veteran Myron Mixon, the winningest man in all of competition barbecue. Mixon is flanked by Tuffy “The Professor” Stone, a barbecue nerd with 30 grand championships to his credit, and, appearing on his second season as a judge, Austin’s own smoked meat potentate and barbecue hero, Aaron Franklin.

I asked Franklin what it was like working on the show. "It’s a lot of fun,” he said, “I’ve gotten to make some really good friends, and meet some incredible barbecue chefs. I really enjoy doing it.” On whether Mixon is actually the egotistical douchebag he appears to be on-screen, Franklin had this diplomatic response, “Myron has a huge heart…and an equally sized head.”

Franklin went on to say, “It’ll be different this year, focusing more on traditional regional barbecue styles and less on competition; a little bit of money, but a lotta bragging rights.”

The new season premieres at 8pm CST on Sunday, Dec. 16, on the Destination America Network, an offspring of the Discovery Channel. Serious barbecue competition viewers can find it on ATX Time Warner at channel 203; on Dish at channel 194; on Direct TV at channel 286; and on ATX Grande at channel 152.