A hard freeze is coming! 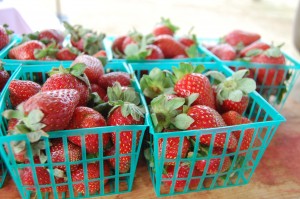 Okay, the weathermen have spoken: there is going to be a freeze next Tuesday night!

So this weekend will actually be the very last weekend for summer vegetables such as peppers, eggplant, okra, and most of the tomatoes. (There are usually some hothouse Fredericksburg tomatoes all winter.) Although a hard freeze won’t kill the cool weather crops like kale, broccoli, cauliflower and carrots, it will probably put an end to the out-of-season strawberries we have been seeing the last two weekends.

But one crop it won’t affect is: snow peas! I saw the season’s first snow peas last weekend, and they should keep coming until March. The cold weather will only sweeten the turnips, which are at their peak right now. 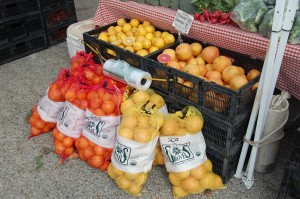 Johnson’s Backyard Garden will continue to have organic ruby red grapefruits for several weeks ($15 for a 20 pound sack). I bought a sack last weekend and these grapefruits are just fantastic, and what a deal. Sometimes JBG will be having oranges too. 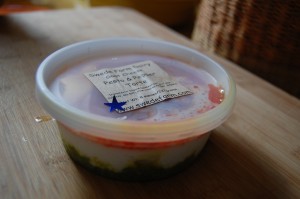 Pesto on the bottom, chevre in the middle, and roasted red peppers on top: Heaven!
Swede Farm Dairyhas a new product that is just about the best thing I have ever had: Pesto and Pepper Torte, made with basil pesto, chevre, and roasted red peppers. With the freeze coming, this may be the last weekend for a while to get this amazing spread, (if I don’t buy them out first, that is.) All Swede Farm’s products are good, but this stuff is amazing! You will not want to share it with the rest of your family. You will want to hide it in the vegetable bin and eat it when no one else is home. 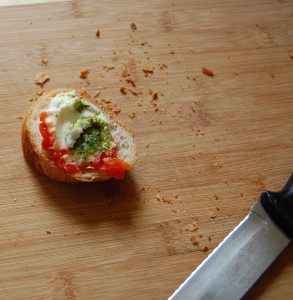 Swede Farm will also be selling Chocolate truffles made with their very own cajeta through the holidays. Says Timothy Carlson Sr. "They taste like a rich dense cheesecake." More on this story as it develops! (By which I mean I am going to try some.)

Dewberry Hills Farm will only be appearing at the Downtown SFC Market this weekend, due to staffing shortages. They determined on the Downtown Market by "using our normal highly technically advanced method of flipping a coin."

Guess who was featured in the New York Post? Fete Accompli! For their extra-rich hot chocolate made with Venezuelan El Rey chocolate, Mill-King milk, and home made marshmallows. National press for Austin’s Farmers Markets, you gotta love it! Currently Fete Accompli is at the Downtown SFC and the Barton Creek Markets. 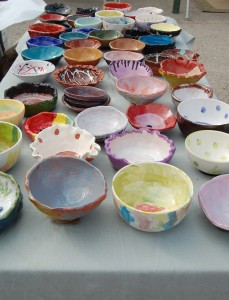 Bowls from the Empty Bowl Project

Ramping up for Christmas, all of the markets are starting to have more craft and gift tables, including the Empty Bowl Project, who were selling some of this year’s extra bowls at the Barton Creek Market last weekend. Watch this space to find out where they will be selling next!

Other important news: It has occurred to me that, now that there are three markets in Austin on Saturday mornings (Downtown, Sunset Valley and Barton Creek) and three markets on Sunday mornings (HOPE, Mueller, and Highland Mall), that I could indeed cover all six of them if I just alternate weekend by weekend. So that is what I am going to do, or rather, that is what I am going to attempt to do. Wish me luck!

And, see you at the markets! 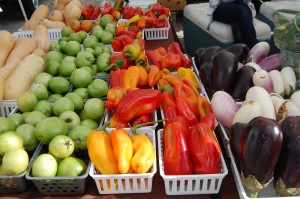 This will be the last weekend for this stuff: peppers, eggplants, tomatoes, okra!