East Side King + Hole in the Wall = Austin Magic

East Side King at Hole in the Wall: The best of Austin on one corner 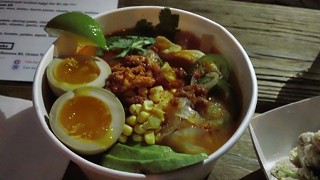 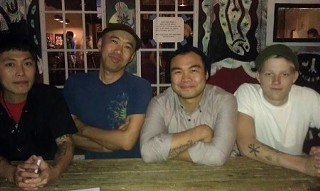 When I was a UT undergraduate back in the grubby early ‘90s, the Hole in the Wall was the standard-bearer of Austin’s self-styled title of Live Music Capital of the World. On any given night of the week, you could see local heroes like Cotton Mather and Banana Blender Surprise, not to mention touring acts from around the world.

Twenty years later, the partnership between the long-standing venue and East Side King represents a fusion of that older identity with Austin’s growing reputation as a hotbed of innovative (and crazy delicious) cuisine.

At last night’s media preview party, Hole in the Wall owner Will Tanner explained that when it came time to rent out the underutilized kitchen, he jumped at the opportunity to work with chefs Paul Qui and Moto Utsonomiya. East Side King at Hole in the Wall, explained both Tanner and ESK’s Deana Saukam, is a win-win-win for the club, the restaurant, and fans of both. The club gets bragging rights, the restaurant gets the benefits of operating with a kitchen with running water and elbow room, and customers get broader access to their East Side King favorites in a relatively convenient location six days a week. (This means that you don’t have to be 21 to enjoy some Asian fusion street food goodness, thanks to a separate entrance on San Antonio street, and the 11am opening means day-jobbing squares can get their buns on over their lunch hour.)

This new brick-and-mortar East Side King, a precursor to a South Austin sibling later next year, features tried-and-true menu items like Poor Qui’s pork belly buns, beet home fries, fried chicken karaage, and Brussels sprouts salad. The amenity of running water also means that East Side King can once again offer ramen, having removed it – to customers’ chagrin – from the menu at their Grackle location. The menu currently has three types of ramen: a bacon ramen; chicken tortilla ramen stuffed with fresh jalapeno slices, corn relish, and tortilla strips; and a squid ink curry ramen. Qui has very specific instructions, er, suggestions when it comes to eating the ramen for proper enjoyment. “Don’t use the spoon,” he says, gesturing to the small plastic Asian dipping spoon that arrived with my soup. “You want to sort of mix everything up in the bowl with your chopsticks, then slurp the soup and noodles straight out of the bowl. In Japan, that’s how you know it’s good ramen; everyone’s slurping it up.”

In addition to the food, the restaurant boasts a full bar, including Sapporo beer on tap ($15 a pitcher), sake, and Shochu, a Japanese spirit similar to vodka, but distilled from barley, sweet potato, or rice.

East Side King enjoyed a brisk opening today; I drove by around 1:00 in hopes of enjoying a late lunch and saw dozens of people on the deck, waiting for their food. I, for one, can’t wait to stick my face into a bowl of bacon ramen (when no one is looking) while steeped in good old Austin nostalgia.

Oh, and if you need further enticement, check out Christian Remde's video preview of ESK@HitW.