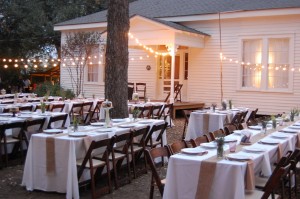 Tables under the Oaks at Boggy Creek Prior to the Event 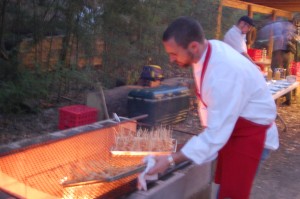 The record mild temperatures were an added benefit, as the event had to be held out of doors due to the massive attendance. An air of excitement and optimism invigorated the crowd, as for the first time in many a long year, a true bipartisan enthusiasm reigned, as both liberals from urban centers and conservatives from rural areas agreed that the Legislature must work to remove barriers to the local food movement. 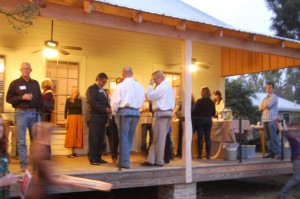 Carol Ann (In the orange skirt) greets the earliest guests

The reach across the aisle was cemented earlier this year as the Cottage Food Law was enacted that has made it legal for individuals to cook certain foods in their homes for sale, such as cakes, jellies, and jams. The Farm-to-Table Causus aspires to to educate members of the Texas House of Representatives on issues relating to the growing, harvesting and consumption of Texas foods. The Caucus will primarily focus on issues relating to Texas family farms, ranches and coastal fishing operations, as well as the distribution and consumption of these goods.

Let us all hope that the spectacle of Texas lawmakers working together, across party lines, for the good of the people proves inspirational to Washington!