Gearing up for Thanksgiving

Formula One madness is poised to take over downtown Austin this weekend, and there will be street closures on Second, Third, and Fourth streets as well as Congress Avenue.

(Some of the closures started yesterday and will go through next Tuesday!) And yes, those are streets on one side of the Downtown SFC Farmers Market, and it probably will make getting to that market to shop more difficult. But the market will be open! If you don’t live in walking distance, I suggest taking Fifth, which does not appear on the list of closures. All of downtown is going to be given over to the Formula One Fun Fest, an event that appears to include lots of crowds and bands, but it is possible that at 9 am Saturday morning it won’t yet be in full swing.

The farm that started it all (at least here in Austin) Boggy Creek Farm, is planing to start selling at the Mueller Farmers Marketon Sundays in addition to selling at their own convenient farmstand on Wednesday and Saturdays. Boggy Creek’s produce is always up to world-class standards; it will be a welcome addition. 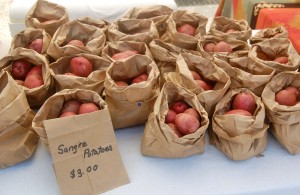 In other Farmers Market News: the Barton Creek Market will be opening a second location at Highland Mallthis Sunday, going into direct competition with the Mueller Market. The Highland Mall parking lot is a terrific place to hold a market, and unlike Mueller they will have puh-len-ty of parking. However (and happily) what we have seen in the past is, we are not even close (as a city) to saturating the populace’s desire for fresh, locally grown organic food. Highland Mall is far enough away from Mueller to appeal to several entirely different neighborhoods, and both markets are in areas that have been farmers-market-underserved, as most of the markets tend to be peripheral.

It is always exciting when a new crop hits the stands, and I am thrilled to tell you that I saw the season’s first baby spinach at Johnson’s Backyard Garden on Saturday! Spinach season has begun! We will be seeing it until (probably) March. In the photograph that I have provided to prove that it is really true, you can also see some lovely dandelion greens (I am pretty sure farmer Johnson is the only one out there selling these beauties. Is there anything that man can’t grow?) 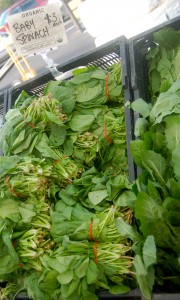 Blanco Valley Chips (organic cornmeal fried in coconut oil) makes, as I have often writtenabout, the best tortilla chips in the nation! These amazing chips are poised to go regional soon (at the moment they can only be bought at the Barton Creek Market) and as part of that effort, they are now in new packaging, made with earth-friendly recycled paper. Way to go! 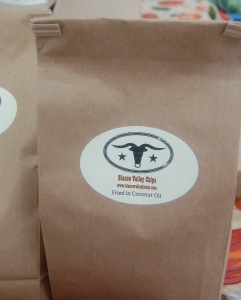 All the markets have got radish fever right now: French Breakfast, Daikon, Watermelon, white, and Easter Egg radishes are in profusion. If you haven’t tried a French Breakfast radish sliced onto the fresh baguette slathered with butter, you haven’t lived. You will never think of radishes the same way again once you’ve had them the French way!

Winfield Farm has been bringing freshly dug red potatoes to market for several weeks, and they are a huge bargain, plus, so nice to have new potatoes in the Fall! Winfield sells at Barton Creek, as does Sandy Creek Farm, where I usually buy all my garlic. But Sandy Creek’s claim to fame is pecans, so look out for their freshly shelled pecans.

It occurred to me after last week’s lapsing Rhapsodic about out local area cheeses, that I hadn’t checked up on what Dos Lunashas been up to since I last wrote about them. Turns out, they have several new varieties! In addition to the Queso Fresca Classico that has made them both prosperous and beloved, they are now also selling a Queso Seco, and two kinds of Cheddar: Chipotle Cheddar and Cumin Seed Cheddar.

So far this year it hasn’t dropped low enough on the thermometer to kill off the summer crops (at least not close to town) so there are still tomatoes, peppers, and eggplants out there. But I wouldn’t wait too long to stock up; they will all soon be gone, making way for the broccoli and the cabbages. I plan to get a few pounds of bell peppers this weekend to last me into December. Still in abundance: winter squash, pumpkins, apples, pecans, potatoes, kale, green beans, carrots, spinach, lettuces, turnips, radishes, fennel, cabbage, broccoli, cauliflower, peppers, sweet potatoes, beets, collard greens, persimmons, and even a few lingering eggplants. Not to mention baby spinach! 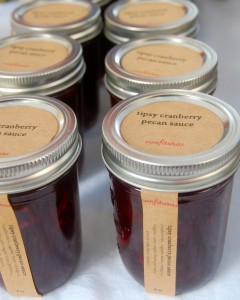 In the fruit arena, there are still a few persimmons, and Top O’ Texas has some apples at the Barton Creek Market. But Johnson’s Backyard Garden has brought in organic oranges and Ruby Reds, and is selling them at all the markets. I am going to buy a 20 pound sack tomorrow! (It’s important to get organic if you are going to make marmalade or use the zest.)

Thanksgiving is just around the corner; this Saturday is the day to pick up your Turkey if you have pre-ordered one, unless you have elected to pick yours up on Wednesday at the Triangle Market. But it is time to start thinking about your side dishes. The sweet potatoes, winter squash and green beans are all looking fantastic this week … While I am at it, I would like to sing the praises of Confituras Tipsy Cranberry Pecan Sauce. It tastes just like the real thing (you know, the cold ridged jelly you dump out of the can and slice), not like a weird new concoction, only much much better! All the nostalgia of the original, but in a fabulous gourmet and superior version!

See you at the market!