Mike & Charlie's (1206 West 34th)was once one of the coolest places to hang out in Central Austin. Mike was Mike Young and Charlie was Charles "Bud" Bates, though they sold the business early on. The recent deaths of chef Michael Devine and second owner Jay Littlepage have had the old Mike & Charlie's very much on my mind. 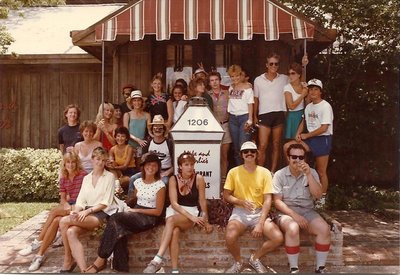 Mike & Charlie's staff members in front of the restaurant

Jay and Kathleen Littlepage bought the restaurant in 1977 and Michael Devine ran their kitchen during their entire ownership. Bud Bates continued to run the Capital Oyster Bar and his brother had Rico's Italian on opposite corners of the intersection of 15th and Lavaca for several more years. Mike & Charlie's was one of Mike Young's first local restaurant ventures. He would go on to open Los Tres Bobos and then partner up with John Zapp at Gianni's (504 E. Fifth), Smitty's and Cafe Havana before they struck gold with the original Chuy's (1728 Barton Springs Rd.)And for another piece of obscure Austin culinary trivia, one of the guys flipping burgers in the original Mike & Charlie's kitchen was none other than Alan Lazarus, who would go on to the lovely but ill-fated McKedrick's Treehouse and Tortuga's before becoming chef/owner of Basil's (900 West 10th) and then Vespaio/Enoteca (1610 S. Congress). So that gives you some idea of Mike & Charlie's provenance.

I didn't actually become involved with the restaurant until the early Eighties when I was in the wholesale dessert business, selling pies, cakes, and other sweets to restaurants with a company called Las Dulces. By that time, Jay and Kathleen Littlepage had expanded to open one of Austin's earliest gourmet bakery/take-out shops, Mike & Charlie's Emporium. For a few years, the Emporium was my very best dessert account, taking deliveries of brownies, cookies, carrot cake, Bailey Square chocolate cake, and lemon bars three times a week. Jay and Kathleen in the restaurant office

Delivering there so often, I got to be friends with Emporium manager Ross Mason (now owner of Avenue B Grocery) and their chef, Michael Devine. I found the Littlepages to be some of the nicest people I've ever met in the restaurant business. Jay was always friendly and reasonable, as good as his word and his handshake. His employees liked and respected him and were always friendly and courteous to me as a purveyor. I have nothing but the fondest memories of that restaurant and those people.

The restaurant business is tough on marriages. Jay and Kathleen divorced and sold Mike & Charlie's after a tenure of 14 years. Subsequent operations never really caught on, what with the constant threat of Seton Hospital expansion looming. The space is now a parking lot and the next generation West Austin crowd found a new home at 34th Street Cafe.

Michael Devine moved on to the kitchen at the Barton Creek Resort & Spa and worked there for 20 years, until he passed away this past summer at the age of 56. I hadn't seen Mikey in years but was genuinely surprised and saddened by his passing. He was such a joyful spirit and a man with such a respectable work ethic, an often rare combination of qualities in longtime restaurant employees, believe me.

Jay Littlepage left Austin for the Highland Lakes area and became the general manager of the Antlers Hotel in Kingsland in 2000. The Antlers is one of the surviving late 19th century Central Texas railroad hotels and Jay presided over its renaissance during the last decade. A veteran of Marine service in Vietnam and a longtime smoker, Jerome "Jay" William Littlepage died of emphysema at the age of 65 on October 27th. He is survived by his daughter and son-in-law Sarah and Chris Cazarez and their son TJ Casarez, all of Brooklyn, his son, Ryan Littlepage of Washington, D.C. a brother, a sister, and a step-sister.

A wake honoring the life of Jay Littlepage and including a toast to Michael Devine will be held on Saturday, November 3, 2012 at 3224 Park Hills Drive from 10:am-1pm.