The talented and energetic folks from Creative Action (formerly Theater Action Project) certainly know how to throw a good party! The I Spy Pie event last weekend on the deck outside Central Market attracted families with kids of all ages and everyone had a great time. 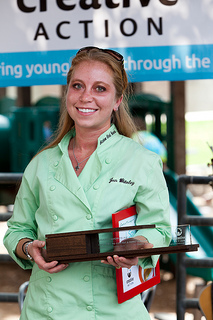 While the Biscuit Brothers rocked out in front of a packed crowd, Creative Action volunteers in big party hats served up little pie samples to hungry kiddos. Central Market Bakery, Central Market Cooking School, Madison Street Desserts, Tiny Pies, and Texas Pie Kitchen created two pies each for the competition and prizes were awarded for the judges' favorite pie as well as the audience favorite.

My fellow celebrity judges were Trento restaurant co-owner Nina Seely, Alamo Drafthouse corporate chef John Bullington, and longtime KXAN reporter Jim Swift. We tasted ten pie samples and were pleasantly surprised at how good they all were. After some serious discussion, we decided the Meyer Lemon Meringue Pie from Madison Street Desserts was our winner. Later we learned that the crowd had chosen the Bourbon Buttermilk Chess Pie from Tiny Pies as their favorite. 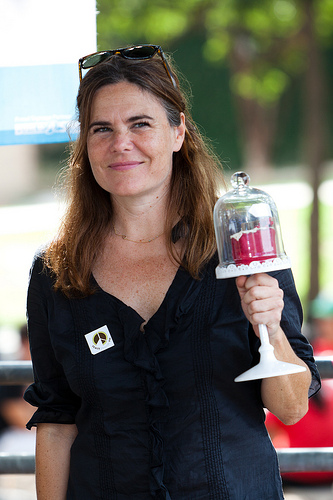 This was the second Creative Action event I've attended this year and I've gotta say I'm very impressed with their productions. The Summer Garden Pageant they put on at the Downtown Farmers' Market in the late spring was a truly remarkable show: scores of kids and adults tricked out in homemade costumes representing the plants, animals, and weather conditions of each of the seasons made for a delightful confluence of theater, food, music, and art.

I Spy Pie was equally well-thought-out and brought together a musical act dear to the hearts of Austin kids, funny hats and decorations (it's amazing what these folks can do with grocery bags and a few art supplies), and an interactive pie contest. What could be more fun or a better way to raise money to support their efforts?

I grew up in a very active community theater school in Midland founded by a young Coleman Jennings. (For many years now a professor for Drama and Theater for Youth in Communities at the University of Texas where this project originated years ago,) The Midland Community Theater was my childhood and adolescent refuge and because I have first hand knowledge of the soul-satisfying benefits of creative play activities, I'll be an avid supporter of Creative Action projects from now on. And besides, it's not very often I get the opportunity to appear in public in a funny hat. Who says I don't have a glamorous job? 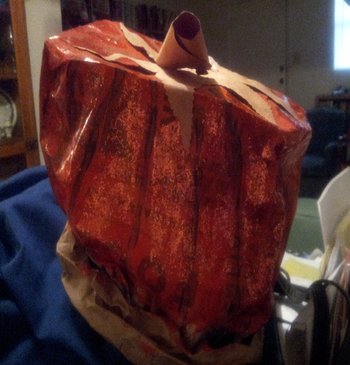