There's nothing quite like the sight of a sizzling 60 pound cone of meat spinning before a wall of fire. Three of them, side-by-side, roasting on vertical spikes is a truly imposing spectacle. That display serves immediate notice to all who enter Verts that this fast and casual meal is not made without attention to authenticity. 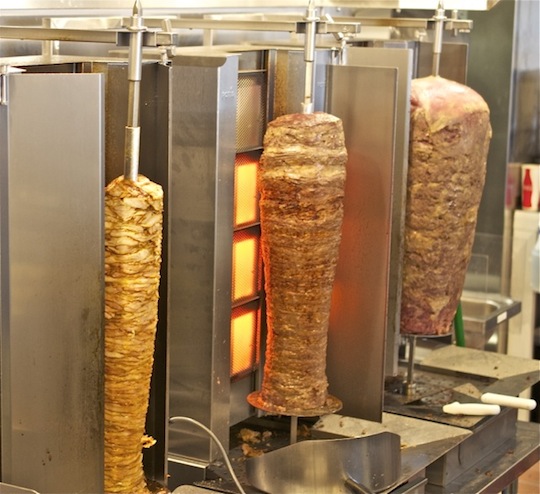 Ask anyone who has eaten in both Berlin and Verts in Austin, and they'll confirm it: this is real döner kebap.

In fact, thanks to owners Michael Heyne and Dominic Stein, Austin is squarely at the center of what the pair hopes will be America's döner kebap awakening. Natives of Germany, Heyne & Stein spent a year as exchange students at SMU where they came face to face with a severe shortage of their homeland's favorite to-go food. In fact, the quick and casual food landscapes favored by youth in Germany and folks in America couldn't be more different.

"In Germany," Heyne explains, "there are roughly 17,000 döner kebap places, while there are just 1,400 McDonald's. All combined fast foods in Germany are outnumbered 6-to-1 by döner kebap. In the U.S., there are 13,000 McDonald's, and just four places selling true döner kebap, based on our last three years of research." That's not counting Verts' four Austin locations (and a fifth set to open in the Hill Country Galleria in November), which means that the two young men have effectively doubled America's döner kebap options all by themselves.

For the record, Michael wants to address one issue very clearly. That stuff you saw The Avengers heroes chewing through at the end of their movie credits is shawarma, a popular Arabic street food. The more familiar small cones of meat (usually ten pounds or less) you see spinning at many Greek eateries is gyro. Neither of them is the same as the other, and neither of them is German döner kebap. There are differences in everything from the type of meat and seasonings to how it is cooked and served.

Heyne offered a brilliant analogy: "It's like Tex-Mex - food that originated in Mexico but has been influenced by Texas over time to become completely unique. Now days, döner kebap [which was first served in Germany by Turkish immigrants] doesn't even exist in Turkey. Turks only eat similar meat in a plated sit-down fashion, and they don't favor all of the condiments and different sauces that were added in Germany." Döner kebap, he hopes, will provide Americans with a healthy alternative to traditional American fast food. Specifically, Verts is competing with that most ubiquitous of American fast foods: the hamburger. Their grill-pressed sandwich is a self contained meal complete with four ounces of grilled meat, like a hamburger, but the calorie count at Verts tops out at 550. Also, as with all vertical-rotisseried meats, most of the fat drips away from the slow-cooked meat that you eventually eat, making for a leaner serving than a quick-fired burger patty. [Not coincidentally, the fat also drips away from the cooking flame, thus eliminating flare-ups and inconsistent cooking - the real advantage that drove the evolution of the 500 year old grilling method behind this restaurant chain's name.]

The tasty, crispy, and moist heart of the Verts sandwich comes from a mass of hand-layered filets of marinated beef and lamb (or seasoned boneless chicken leg meat, which became popular in Germany during Europe's Mad Cow Disease crisis and still makes up a full 50% of the döner kebap market there), with no fillers at all. In addition to being roasted on genuine imported German equipment (American spits can't handle the weight of the Verts cones), Heyne & Stein also brought with them a surprisingly critical tool: purpose-built electric knives. These special blades are set to shave the spinning roasts at a thickness of just one millimeter. "Only one half of an inch on the outside of the cone is ready to be served. The middle is frozen, and in between the meat is too rare," says Heyne. The electric shavers eliminate the risk that would come with someone trying to carve a moving object so precisely with a regular knife.

Michael and Dominic know that they have an uphill battle to fight, in terms of educating the public about their specialty, but hungry Central Texans are proving to be quick students. Verts' simple menu is already winning over crowds of fans by delivering delicious flavors at a great price ($6.95 for a regular sized sandwich; $4.95 for the snack size). By May of next year, the pair hope to open at least two new store fronts in South Austin, and if things continue to go well, "another city is possible - but our planning remains focused on today's challenges." The young duo bring such energy and measured passion to the kebap counter that it's hard to believe they won't continue to prosper, and it wouldn't be surprising if Austinites soon have yet another national success story to call their own.