Popovers at the Piggy Place

Back in the late spring/early summer, a new phenomenon was born in the North Loop neighborhood: a pop-up bake sale in the two-year-old American bistro, Foreign & Domestic. "I thought it would be fun to utilize the space in a different way," says Jodi Elliott, who co-owns the restaurant with her husband, Chef Ned Elliott. "We had no idea what to expect. 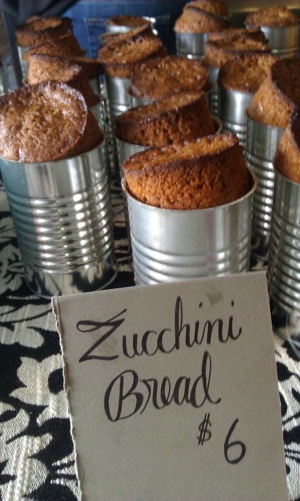 "We just put it out there on our Facebook and our Twitter. The first one was just insane; we weren’t expecting that turnout. We sold out really quickly and it was chaos," she laughs. "It was clear that it was something that people are into."

Specializing in "breakfasty things, but also whole pies and cakes that people could take to dinner parties or picnics or functions or whatever," the now bi-weekly bake sales help Elliott channel her creative energies in the form of menu stalwarts black pepper and Gruyere popovers, various croissants and danishes, an absolutely sinful turtle brownie, and gorgeous quickbreads baked in tin cans for a nostalgic, homey feel. And while the sales technically last from 10am to 2pm every other Saturday, the goodies rarely last until noon. [image-2]

What's really special about the bake sales is the obvious community energy around them. Pull up at 10am and you're guaranteed a good 30 to 40 minutes spent in line visiting with your fellow pastry lovers, while neighborhood residents converge on bikes or on foot and pushing strollers. On a recent visit, my daughter and I were in line behind a family with twin girls who were the same age as my little lady. The trio became fast friends, which meant that I got to spend several very pleasant minutes comparing notes on three-year-old girls, and learned that this particular family had made a special trip from the Lake Travis area to visit the bake sale they had heard so much about.

Giving back to the community is what inspires Elliott the most in this endeavor. "It is inspiring to see adults getting excited about what they want to choose, and even more exciting when they know that part of what they spend goes to charity," says Elliott. While the bake sales, which bring in a couple of thousand dollars at a time, were used as a fundraiser to upgrade the ovens at Foreign & Domestic, they are now a philanthropic concern. Each quarter, Elliott donates 20% of the bake sale revenue to a selected charity -- from now through the end of the year, that charity is Planned Parenthood. Elliott explains that, as a service industry worker without health insurance, much of her health care for many years was provided by Planned Parenthood: "It was important to give back to the cause, and felt immediate since it has been in the news recently.

In fact, representatives from Planned Parenthood will be present at Saturday's bake sale (/9/29), providing information about the resources and services they offer. Elliott is also open to suggestions for future recipients of bake sale monies, with a special emphasis on programs benefiting women and children, education, and hunger-related causes.

Clearly, Jodi Elliott has tapped into some primal desire in Austinites to enjoy artisanal pastries that serve to build community on a number of levels, while also getting to flex her pastry-chef muscles in new and delicious ways. "It’s exciting to have the chance to show a different side to F&D, that we do more than just savory food at dinner," she says over the roar of a blender during dinner prep at F&D. "It always surprises me how many people show up every week, because they could just go to Central Market or wherever and get a cinnamon roll, but they choose to come here and it’s a treat for them and that’s humbling."

You can find the full schedule of F&D bake sales on their website, with weekly menu updates. I highly recommend the pineapple blondies.