Meals on Wheels Kitchen Cooks Up a Winner

Austin's Meals on Wheels & More put out a call for new entree recipes in August and more than forty home cooks responded with entries in the contest. Three finalists were selected, those recipes were adapted and prepared by chef Ruben Burnett and his kitchen staff, and judges were invited to evaluate the resulting dishes.

Two of the three finalists also attended the luncheon and it was interesting to note that all of them had some strong connection to Meals on Wheels that inspired them to submit recipes to the contest. Jan Dimmit said her husband is a long-time volunteer driver and she thought the hearty vegetarian enchiladas her family loves might be popular with MOWAM clients, as well. Paula Angerstein, creator of Paula's Texas Spirits, supports MOWAM by making product donations to fundraising events and is a former volunteer driver for the organization. Former pastry chef and cooking teacher Marilyn Scher was observing a religious holiday with her family and couldn't be with us, but she emailed to say she had submitted her orange rosemary chicken in honor of her late father, a MOWAM volunteer driver for many years.

Once the introductions were out of the way, the serious eating began. Head chef Ruben Burnett presented each dish and explained the challenges in adapting them to the institutional production model necessary to produce 2,500 to 3,00 meals a day. For instance, in the two chicken dishes, it was necessary to cook the protein separately from the sauces and ladle the sauces over the chicken thighs once the entrees were served (or packaged). In the enchilada recipe, a frozen cheese enchilada was substituted for much more time consuming rolled or layered enchiladas and the spinach/corn filling was used as a sauce. The contestants on hand were pleased to note that the dishes presented to the judges bore a strong resemblance to the ones they are accustomed to producing at home. 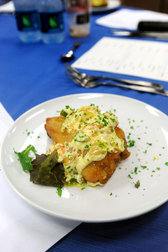 After tasting the entrees and evaluating them on the basis of appearance, aroma, flavor, and texture, the judges conferred with MOWAM Food Service Director John Harvath and chef Burnett about the production and presentation challenges of each dish. Choosing a winner was difficult because all three final recipes resulted in very tasty entrees that we were sure discerning MOWAM clients would appreciate. The winner is Paula Angerstein's Flemish Chicken, a recipe that features a crispy baked chicken thigh under a sauce of carrots, onions, celery, and bay leaves in sour cream. The new entree will bear the label Paula's Flemish Chicken when it appears in the regular entree menu rotation and the judges are confident it will be a hit.

And since Austin Restaurant Week founder Taylor Perkins was one of our fellow judges and Meals on Wheels & More is their charity partner this year, it seems appropriate to mention a wonderful party being held to celebrate the conclusion of Austin Restaurant week. On Sunday, October 7th, Austin chefs Shawn Cirkiel of Parkside, Ned Elliot of Foreign & Domestic, and pastry chef Janina O'Leary of Trace at the W will join forces to prepare a special five-course meal for guests in the Meals on Wheels kitchen, chef's table style. Guests can observe the meal being prepared while enjoying pairings from Hahn Wines, cocktails from Pepe Z Tequila and Paula's Texas Spirits, and live musical entertainment. Tickets for this first time event are $85 per person and entitle the guest to access to the official Austin Restaurant Week wrap party, as well. For more information and to purchase ticket, go to www.RestaurantWeekAustin.com or call200-3439.