What to look for at the markets Rain, and cooler weather--MAGNIFICENT! It may even be raining Saturday morning, but there is no reason to believe the weather report--we sure as shooting didn't get any 3 inches as promised on Thursday (shakes fist as Mark Murray).

It's too soon for it to be affecting the crops, but in not too long we'll be seeing more brassicas and cool weather greens. In the next week or two there shall be lettuce again, or so I have been assured! The cooler temperatures will give us sweeter tomatoes, milder arugula, and bounteous peppers and eggplants, though.

Of course I must report on the Mueller Farmers Market! It was beyond packed--that area of town (Flightpath) has needed a farmers market for a long time, and everyone and their grandmother came out for the opening. I got there at around ten-thirty (thirty minutes after opening) and just about everyone was sold out of most everything. In half an hour! Well, actually I did walk (I mean cram myself through the dense river of bodies) around a little, so it was more like IN AN HOUR! I imagine that in the coming weeks vendors will a) bring more stuff, and b) the crowds will thin to manageable levels. If I had room I would post: 1) a picture of a cleaned out! Cake and Spoon stand, 2) a picture of the Pure Luck Goat Cheese guy selling me the last unit of Hopelessly Bleu and 3) The Lady (and child) at the Yogurt Factory Greek Yogurt stand selling me her last two yogurts. Weighing the wedge of Ayote

My highest endorsement goes to Lala's Lemonade, where fresh made tart lemonade and cucumber-mint lemonade were to be had or a mere $2. For, what I believe may have been a whole pint. Perfectly blended (at least for my taste- I don't like it too sweet) and What. A. Deal. Sunset Valley News: I finally bought a wedge of the Ayote squash sold by Finca Pura Vida Farms. Edgar, the man in the photo, tells that his family has been growing this heirloom squash for 500 years, in Costa Rica and Texas. Described as like a butternut, only much more flavorful, I bought a wedge to make soup. The results were heavenly, and the description was apt. The Ayote was like butternut, only sweeter and more intense. 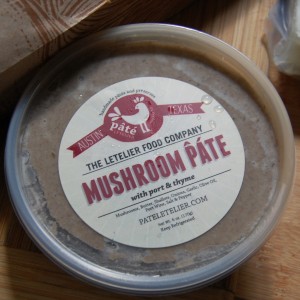 I also tried the Letelier Mushroom Pate ($7) and it is, so far, my very favorite. Really wonderful on a fresh Baguette, perfect with Swede Farms goat chèvre. Swede farm will be at Sunset Valley and Downtown, and will be bringing cajeta to market as well as chèvre and milk and chocolate milk. Their cajeta is super authentic and just amazing on ice cream or flan.

What there is in abundance: tomatoes, eggplants, peppers (both sweet and hot), cantaloupes, watermelons, winter squash and summer squash, potatoes, sweet potatoes, onions, basil, okra, pears, persimmons, pomegranates, figs, and pumpkins!  Also Johnson’s has Kale, and parsley, and may have amaranth.

Cucumbers should be making a comeback what with the rain; there may be lettuce (but probably not til next week); begin to look for cauliflower.