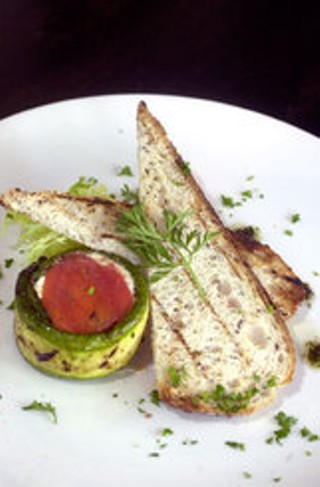 German cuisine has several dishes that can be described as fun, assuming you drink a gallon of beer beforehand, polish off another couple of bottles while eating, and gulp half a bottle of Jagermeister for dessert. "Washing it down" is the German way to enjoy bratwurst, sauerbraten, and schnitzel.

If you’re looking for German meal that can be settled with dancing to some Oktoberfest tunes afterwards, you might as well go to Fredericksburg and stop reading here. If you are looking for an altogether different take on German cuisine, you should definitely seek out to a little restaurant in West Austin called Fabi +Rosi (509 Hearn) The chef is German, his name is Wolfgang, but the food is from a planet other than Bratwurst. ''Every once in a while, guests complain that our food tastes different from what they know from Germany,'' Wolfgang tells me in his thick German accent, sitting at a restaurant table one day a couple of hours before opening. ''I then have to tell them that I am sorry, but I just do not know how to cook like a chef on a US military base in Heidelberg.''

Wolfgang learned his craft at a restaurant in southwest Germany. In. A. Castle. He later moved to Spain, to work as a private chef on a rich man’s yacht. He won’t say who, but he will say that this gentleman throws excessive dinner parties. Once, while the yacht was docked off the coast of Spain, a girl from Austin named Cassie showed up as a guest. She says she’ll never forget how she ate this crème brûlée and fell in love, before even knowing who’d made it. She met the chef on the yacht after dinner. They talked all night. He grilled shrimps for her. They fell in love.

Wolfgang told Cassie how he wanted to open a restaurant. He already had a menu in mind – European cuisine; the best from Germany, Italy, Spain, and France. He wanted to name it Fabio's after his nephew. Cassie said she liked the menu, but that in America, the name Fabio is forever linked with a certain blonde, long-haired man, who made a fortune gracing the cover of every romance novel ever written.

After a week of amour, Cassie had to go to Italy, and then home to Austin. Wolfgang had to keep on cooking. They said goodbye. Two days later, Cassie received an email that read: 'I want to visit you.‘ Wolfgang flew to Austin, they got married, and one night after Cassie came back from walking the dogs, she said: ''Wolfgang, I think I found our place.'' It was a small, shabby house with a wild rose garden that would become their restaurant. Since Fabio’s was out of the question, and since Wolfgang’s nephew Fabio now had a younger sister, Rosalie, they named the place Fabi + Rosi.

Cassie handles the interior design and is manager. Wolfang is butcher and chef. Their menu changes with the seasons and availability of ingredients. Every leaf of basil, every pinch of salt, every cut of goose liver is as local as possible. The rabbits are bred by a Frenchman named Sebástian, who lets his animals hop through the hills. The lamb comes from Loncito, who one day walked into the restaurant, threw a bunch of lamb chops on the table, and said: ''Put these on the menu.''

If you eat at Fabi + Rosi, you might want to try the marrow soup ($8) with beef-marrow dumplings, which taste so fresh and healthy you’ll expect it them to moo. You could also go for the Halibut ($23), which floats on a thick and creamy artichoke purée and an olive-and-caper salad. Close your eyes as you bite into it, and you just might see the the rocky coast of Sicily, and feel the salty breeze rushing through the olive groves. Or try Loncito's lamb T-bone chops ($24) on Manchego grits. You'll find yourself wondering how in the world someone can breed so much flavor into such a tender and young piece of sheep. Finally, prepare to become addicted to the chevré tart ($7), a goat-cheese cake topped with caramelized lemon. It is so good that you‘ll want to scream and bang your head on the table in joyful rage.

If you've eaten all the above, then you've taken a culinary journey through Italy, Spain, and France. You might not have thought of Germany once -- but that's alright, says Wolfgang. Of course, the menu has some German specialties. When little Fabi and Rosi visited the restaurant for the first time this past April, they ordered the only dish on the menu they knew. They had schnitzel.

German journalist Takis Wurger writes for Der Spiegel and is currently attached to the Chronicle through an international fellowship program. 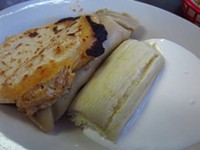 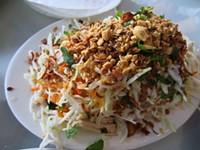 Traveling Barbecue Road
Visiting from Germany, Central Texas barbecue has won me over