What to expect at the markets this Saturday 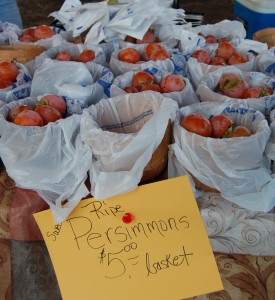 It will be called theMueller Farmers Market and will take place on Sunday mornings from 10 am to 2 pm (a little later than Saturday's markets, I guess because of church. Or maybe hangovers?) in the historic Browning Hangar off of Airport Boulevard. It is brought to us by the Mueller Shopping Village and the folks who do the Cedar Park Farmers Market (a very respectable and great market, just a little too far north for me to patronize.)

What makes a great market is the vendors, and the Mueller market vendors will include Confituras, Countryside Farms, Pure Luck Goat Cheese, Engel Farms, Hairston Creek Farm, Texas Hill Country Olive Company, Johnson's Backyard Garden, Winters Family Beef, Mill-King Dairy, Round Rock Honey, Green Gate Farm, Sweetish Hill Bakery, Cake and Spoon, Dos Lunas Artisan Cheese, RRR Farm, and McCall Creek Farm, and about 20 more!!! It is going to be huge! I will be there the second they open this week, but based on just the list of vendors, this Market will be a perfect alternative for folks who can't get to the Saturday markets for whatever reason. (Even I myself, the Farmers Market Reporter, occasionally go out of town, have a conflict, or a bad hangover.)

In Other News: The persimmons are in!  Lightsey Farms had a big table downtown of the glorious red soft ones. If you are a gigantic persimmon fan like myself, be sure to bring a cardboard box or stiff basket to carry them home in, because they will split open if you try to carry them home in a bag. Which I did, last week, and fully half of them split, forcing me (forcing me I tell you!) to eat them immediately upon arriving home. 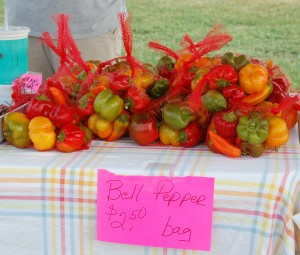 The lowest sweet pepper price I found last week was these beauties at $2.50 a bag at the Flint Rock Hill Farm table at Sunset Valley. That's pretty much half price! Like I said, sometimes at Sunset Valley they really do try harder. Flint Rock eggs have gone up to $4.50 a dozen, but are still cheaper than most. 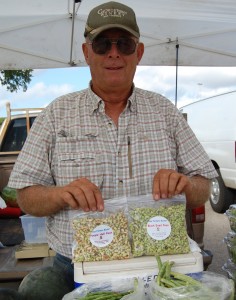 Star Farmers Market, which is a vendor at Barton Springs Farmers Market, has fresh Purple Hull peas and Cream Peas, already shelled and still in the pods (should you want to save money, or maybe force your children to shell peas to build their characters). Star also sells the bestest strawberry jelly, personal watermelons, and really sweet cherry tomatoes, with white shoulders. I read recently that the sweetness of tomatoes is in their white shoulders, and that is why modern hybrids are less sweet; scientists bred them to have red shoulders for the sake of appearance.

Ottmer's Family Farms has become my go-to stand for big tomatoes, though. I don't know how much cooler it is out at the Ottmer family of farms (there are two brothers who have farms, and also their parents, Opa and Oma, who also have a farm) but their big red tomatoes are definitely the sweetest. Ottmer's is a great stand to buy tomatoes at if you are making a big batch of marinara, the pricing is most reasonable! This week they will also have okra, sunflower sprouts, and a variety of pickled and canned items. I bought the pickled yellow squash last week, and they are very like a dilled cucumber pickle. Super good on a grilled cheese! 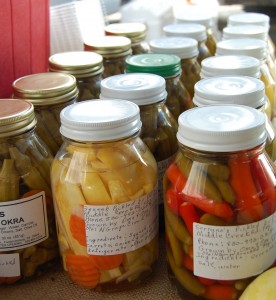 All kinds of pickles at Ottmer's (Downtown)

I don't know if you were an avid enough food newsreader to catch this article about Windy Hill Farms goat meat, but I have bought goat stew meat form  Windy Hill twice this summer, and it makes the absolute best salsa verde stew ever. Windy Hill sells at Barton Creek Farmers Market, and if you are interested in trying how wonderful goat meat is, buy some! It is just a sublime product.

Since there still isn't lettuce, I bought a bag of arugula and a big bunch of amaranth greens at the Johnson's Backyard Garden booth, and I must say! They made a very nice salad indeed. As hot weather lettuce substitutes go, it was an excellent combination. I do recommend using the tiny amaranth leaves though- the big ones are a little tough. 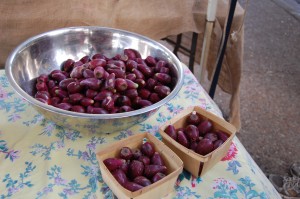 Magenta News: Munkebo Farms, (those of the duck eggs) at the Downtown Market has been making a sideline of magenta foods: prickly pear fruit and a salad herb called Magenta Spreen. Magenta Spreen is a relative of spinach, has a spinach-like flavor both cooked and raw, and it is a great hot weather salad green as well. The Prickly Pear Fruit is sold completely de-spined !!  That means, no cactus needles! Last week folks were practically fighting over them, because they are ready-to-use, and how often can you get anyone to clean your tunas for you?

Asian Pears: a brand new farm has hit the scene, Bee Creek Farms, and they are selling Asian Pears (big ones) at the Sunset Valley Market.

There still might be cucumbers, and field peas, but probably not more than one stand per market. Grab them early if you see them.

I nearly forgot to mention: Swede Farm Dairy has Hatch Pepper Chèvre, and it's both fabulous and a limited-time item. See you at the market! Or rather, the markets, because I am going Saturday and Sunday! 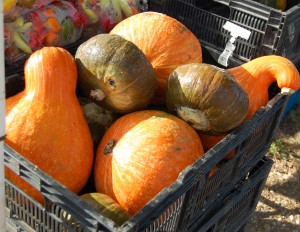