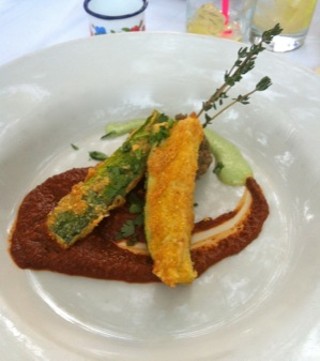 In a month-long head-on dish vs. dish cooking competition at Papi Tino's, one Austin culinary student will shine and win an unusual prize.

Like many of you, I’m sure, I’m a closet Food Network geek. I’ve spent many an evening over the years guffawing at silly Emeril and his flying parsley, cursing Rachel for stiffing servers to come in under 40 Dollars a Day, and wondering what my husband could actually learn from Giada, whose show we now simply and affectionately call, “Cooking with Boobs”.

However, I’m not nearly as embarrassed to admit that I enjoy the competition programming and will chat without shame about Iron Chef, Cupcake Wars, and Chopped. The sweat. The blood. The tears.

So when given a seat at the Judges’ Table overseeing a battle between local culinary students at swanky Papi Tino’s on East 6th, clearly, I jumped. And adding a little fuel to the competitive fire: dishes are to be paired with smoky mezcal.

Here’s the set up: Wednesday nights in September, two top (and willing) students from three local culinary schools move into the kitchen at Papi Tino’s and prepare a dish to be enjoyed with a sip or two of the blazing and popular booze provided by Wahaka Mezcal (made in Oaxaca, Mexico and available all over Austin).

Judges award points based on taste, creativity and appearance (the holy trinity of cooking competitions) and the winner moves on to a final battle in Week Four. The Prize? A job cooking at Papi Tino’s. While it’s no $10,000 or Tyler Florence handing you the keys to a snazzy food truck, it’s a pretty terrific deal. Papi Tino’s is honestly highlighting and supporting culinary education, and Week One was a whole lot of fun.

Last night two students from Natural Epicurian Academy turned out their dishes, and we judges dined, sipped, critiqued, and awarded our points.

Dish One: Zucchini con Pipian Rojo by Mike Lyons. Two thick strips of tender but crisp zucchini dusted with cornmeal and fried with a spicy ancho pepper sauce, another cool cilantro-lime sauce thickened with cashews (a terrific part of the plate), and black lentils.

After we ate, but before the winner was announced, Lyons and Singer came out to talk about their dishes and get some feedback from this week’s judges: Executive Chef Nadine Thomas from W Hotel, Jacob Weaver, executive chef from Mulberry and Haddington’s, Amy Drohen of Yelp, food lover Arturo Espinoza of Chiropractic Concepts, and myself. By the smallest of a two-point difference, Mike Lyons’ crispy zucchini dish won the first round of competition. He will go up against culinary up-and-comers from Escoffier School of Culinary Arts and Le Cordon Bleu at the end of the month.

We wish him luck with his vegetarian, healthy ways as he faces the potential heavy-hitting forces of butter, bacon and duck fat. Who knows? Light and bright can often rise above the rest.

Check in here next week for an update of Week Two competition.