Chronicle critic Mick Vann is always on the hunt for great ethnic food. 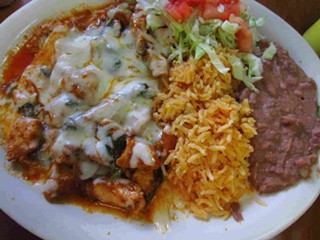 I'd been hearing good things about the food at La Casita (1519 W. Anderson Ln): rumors about great totopos and handmade tortillas. I'm a sucker for stuff like that, so we went by for lunch last month.

The place sits right next to, and just east of, the railroad track that crosses W. Anderson Ln. (which is really EAST Anderson Ln., meaning the eastern portion). It sits about half way between Burnet Rd. and Lamar Blvd., on the south side of the street. If you’re a foodie, it resides in the building that used to house Bismillah, that paragon of Persian-Middle Eastern food that just up and vanished from the food scene years ago.

The colors are predictably garish, and you enter into a comfy space with Mexican TV going on, and some music in the background. The menu is fairly large, covering many bases. Judging from the name of the parent company, Guanajuato is the Mexican region represented. Guanajuato is a gorgeous city in Central Mexico, a World Heritage Site, and for a time, supplied most of the world’s silver. The original Indian name, Quanax huato, translates to “hilly place of frogs” (although no frogs legs appear on the menu, regrettably).

We split a pastor gordita (based on the promise of hand-patted masa), a small bowl of posole (I am a total posole freak; love the stuff), enchiladas potosinas (one of their specialty dishes; San Luis Potosi borders to the North), and Pollo Piki Piki (another specialty dish). The basket of totopos (chips) arrived and they are fantastic: thin, hot, crunchy, and loaded with masa flavor. The salsa that comes with is spicy and flavorful, but so thin and watery that it’s almost impossible to get any to stay on a chip.

The gordita ($3.49) was of the cut-with-a-knife variety, but the flavor of the pastor pork was fine. The gordita itsownself was dense and tough; too bad. The small bowl of posole ($4.99) was pretty large, and heavy on porky, chile-laden broth, with chunks of fatty pork and bone; I’d call it more soup than stew, and would have preferred more hominy (the cheapest ingredient in there). It came with a topping of cabbage, onion, and cilantro, with limes for squeezing.

The Enchiladas Potosinas ($7.99) were a bit of a disappointment. There were five cheese-filled mini turnovers sitting on top of a small, thin steak that had been marinated and grilled (this is the cut you see in the Mexican meat markets). The steak was a little on the tough side, even for it being as thin as it was. The masa on the turnovers was dense, especially on the edges, and the beans and rice were okay, but not on a par with, say, Taco More.

The Pollo Piki Piki ($7.99) was really good: a mound of chicken fajita meat is topped with sautéed mushrooms, spinach, chipotle sauce, and white cheese. We wolfed down the meat, but again, the refried beans and rice didn’t excite.

Service was fine, the space is comfy, but as we always ask, “Was it good enough to go back?” I don’t know; still thinking on that one. The menu is big, so there could be undiscovered gems, but we did try a couple of their specialties, and found one of them lacking.