Best to get this confession out of the way, first thing. I'm probably the only food person in Austin who didn't watch Top Chef: Texas on Bravo last winter to root for hometown hero Paul Qui.

It isn't that I'm not a Qui fan (I am!); I just don't watch much TV and, for me, competition is not what cooking is about. That said, I was as proud and pleased as anyone at Qui's victory and the universal recognition of his tremendous talent. I'd met him a few times as he was building his career in Austin, and, a couple of years ago, I interviewed him at Uchiko for a story I was writing about Japanese cooking. I've been impressed by his modesty as well as his abilities--in the interview, after he described exactly the techniques necessary for perfect tempura, I asked if he'd considered teaching. He said, "Oh, no. I don't know enough yet to teach."

So, two years later, I was pleased to get a last-minute opportunity to sit in on a demo class Qui presented at The Silver Whisk Cooking School last Friday. I was curious to see how much the Top Chef hoopla might have changed him since we'd spoken about tempura and teaching.

My observation? Not very much. As he cooked, he explained ingredients, flavors, and techniques, demonstrating yet again his quiet confidence, affinity for Asian preparations, and talent for making seemingly simple dishes sublime. He prepared variations of three dishes he'd done as part of the Top Chef finale: chawan mushi, a classic Japanese savory custard, this time with scallions and fresh corn kernels; congee (Chinese rice porridge somewhat akin to risotto) with sautéed maitake mushrooms, lemon zest, and soft scrambled egg; and finally, a slushy, drinkable coconut sorbet with a float of sake. Seemingly simple but sublime? You bet.

The most noticeable difference in Qui from our previous encounters was that he seemed more relaxed and much less shy (I suppose working in front of the camera for millions of viewers will do that), although he told me afterward that it was his first time to teach a class and he'd been nervous. The initially star-struck students responded to his openness and peppered him with questions--anything from, "What's a waterbath?" to his family's culinary history to "How stressful is cooking on TV?". He answered everything with humor and grace; his response to the last question was that he'd seen as much drama in any restaurant kitchen as he found on Top Chef.

When someone asked if he'd like to be another Emeril, Qui answered with a smile. "Maybe, yes, when I'm Emeril's age. But now, I just want to be in the kitchen and cook." And Austin is fortunate that, at least for the time being, he wants to do it here. He'll be guest-cheffing at Uchi September 10-15, and his own restaurant in South Austin is in the works. 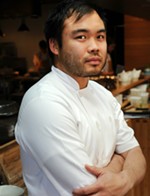