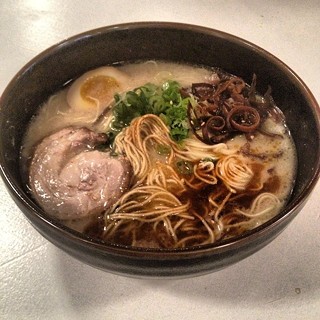 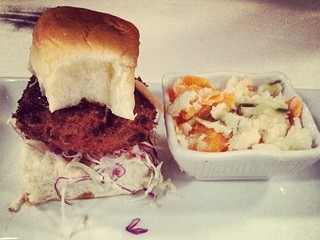 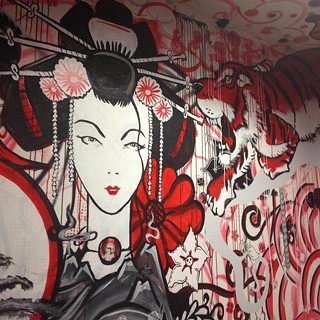 Their notable cultural and culinary training (Musashino, Second Bar + Kitchen, and 2 Michelin star rated Urasawa in L.A.) reportedly shines through in the soulful and delicious cuisine.

A Chronicle colleague with significant ramen knowledge visited the fledgling restaurant this week and reported that the ramen was delicious. He also mentioned, several times, that days later he and his wife are still raving about the amazing sliders, described by Tatsu-ya as a “breaded, deep-fried burger on a Hawaiian roll with katsu sauce.”

The strikingly beautiful interior, designed by local firm McCray & Co, credited with Lenoir’s interior design, seats 38 guests among communal tables, bar seating, and 3 tops. A bevy of local artists and craftsmen joined efforts to create an inviting space with a mix of contemporary and traditional Japanese design: wood and rope accents, a black, white, and red motif, painted murals and a geometric flower crest, and unique furniture created using a combination of restorations and original creations.

This Saturday September 1st marks the Grand Opening (open for dinner Tuesday through Saturday 5pm-10pm), and reports from this week’s soft opening indicate this authentic Japanese culinary project has all the makings of a giant success. I plan to slurp some ramen as soon as possible.