What to expect at the farmers markets this weekend 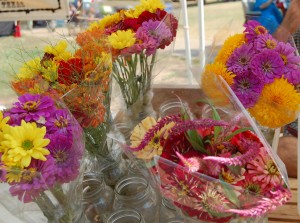 Flowers at the Downtown SFC Market

For those of you who have been avidly reading and eagerly awaiting my Farmers Market Reports: you may have noticed that I am writing them the day before the market, instead of the day of (or the day after!)

So really, it is more like a prediction than a report … but I like the name Farmers Market Report because it sounds so American and businesslike. So I am keeping it.

But my predictions are soundly based on my observations from last weekend, and the hot news tips I get sent by farmers. I know it may seem like I am just gazing into my crystal ball, but in reality I do go to the markets and peer around through my thick-lensed glasses trying to observe things. 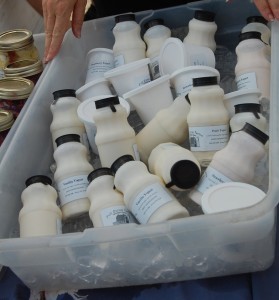 Breaking News at Barton Creek Market: As you no doubt read a few weeks ago in this very news-breaking space, Texas Daily Harvest is no more. Now, one of the things the various local dairies have done is diversify their offerings. For instance, Full Quiver Farms has long had the monopoly on cream cheese and cream cheese spreads (as well as on cheddar, and nut-crusted cheese balls, and lacto-fermented sauerkraut, beets and salsa.) Texas Daily Harvest specialized in milk, greek yogurt, drinkable yogurt, cream, half-and-half, and buttermilk. Acute Businessman that he is, Farmer Sams of Full Quiver got busy, and introduced his own yogurt at the market last week, to fill the gap left by Texas Daily Harvest. What initiative! He has several flavors including vanilla and cherry, and drinkable yogurt also. 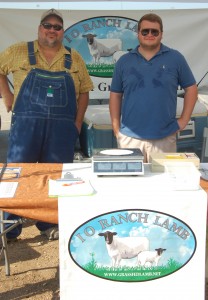 Breaking Sunset Valley News: There is a new lamb purveyor in town: IO Ranch Lamb. Look at these guys! Clearly this lamb is G*R*E*A*T! In a couple of weeks they are also going to have lamb sausage, too. 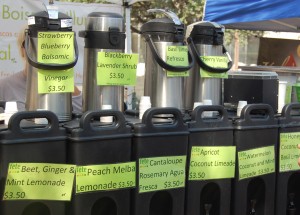 Downtown Focus: A few weeks ago Fete Accompli set up at the Barton Creek Market with their awesome new line of fresh-squeezed juice blends. I had the arugula limeade and it was addictive (that is the usual reaction; it tastes like wonderful tart limeade, but has the protein and vitamins of arugula mixed in, which the body craves. Plus it is green, which is F*U*N). But at present they are only selling at their Downtown Market home base. The line of juice blends keeps growing exponentially as market-goers realize they can't live without a Fete Accompli juice drink. I had the watermelon/coconut/mint and now I am a fanatic. These juice blends really are the cat's pajamas, and a super successful market niche triumph!

On to the regular news:

What is at the Markets: Squash! Tomatoes, watermelon, cantaloupe! Potatoes and onions! Plenty of basil, okra, and quite a few butternut squash. Apples, peaches, figs. Hot peppers, sweet peppers, eggplants in abundance.

If you want cucumbers, get there early. There are still some, but the vines are burning up and they aren't as ubiquitous as they used to be. Ditto for lettuce, it sells out quick! (If I may get on my soapbox for a moment: the local lettuce is so worth it. It is fresh-picked, so it lasts in the icebox up to three weeks! For comparison, a head from a supermarket lasts about four days tops before it starts to rot or rust. That supermarket lettuce is old. Take it from a gardener. I know how long a fresh-picked head of lettuce will last in the fridge, and how old it must be to rot in a few days.) 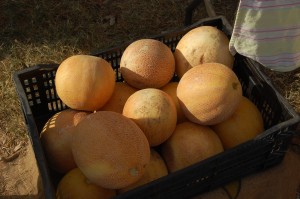 Simmons Family Farm has fresh bags of Arugula, too, and it baby arugula so its not too spicy.

I noticed a few weeks ago that I was tending to write about the same vendors over and over. Why is that? I wondered. Then I realized I was getting all my news from the farmers who I buy from regularly, because I would be shooting the breeze with them over our financial transaction. I don't want to be a favoritist engaging in cronyism, so last week I went around handing my card to vendors I don't know, encouraging them to give me the hot news tips I mentioned above. One of the vendors I approached thusly was Swede Dairy Farm, and when I saw the look of disappointment (because I was just handing her a stupid card) on the face of the child who was manning the booth, I just went ahead and bought some chèvre and also some chocolate goat milk. Wow. Now I am a huge fan of Swede Farm! Their chèvre is indistinguishable from Pure Luck Chèvre, which is the best goat cheese ever, plus, I think it is a little cheaper at $10 for 8 ounces. Yes, Swede Farm gives you a whole container, not just a little pat. And it's great!

(Pure Luck no longer sells at the Farmers Market, because they are too busy selling to chefs all around the country and winning awards. I am going for mocking-derisive-openly-jealous-feeling ignored with that typeface. There aren't enough typefaces!)

The chocolate goat milk is insane. It's $5, and they make it with the cream, and also using super gourmet chocolate. It is bliss. Of course, you could buy it for your kids, but it is so totally over the top superlative, I think it must be made with grown-ups in mind.