August 15 is the 100th anniversary of the cook's birth 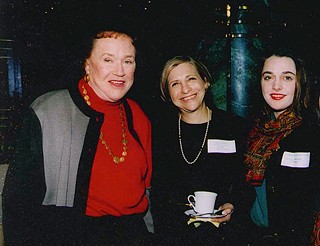 Tributes and celebrations are planned all over the country. The Smithsonian has re-opened the exhibit containing her home kitchen for the next two weeks at the National Museum of American History, and PBS is sponsoring a 10-day, multi-platform initiative with public interaction.

In honor of the woman whose iconic cooking program helped solidify public television's success in the early years, PBS solicited memories from chefs who had worked with or were mentored by Julia Child. Those stories and photos are posted on the network's website. They've also encouraged Child's international legion of fans to prepare their favorite Julia Child recipe and post photographs of the dishes on social media sites. (#CookWithJulia).

Locally, KLRU will air Julia Child's Memories: Bon Appetit from 7-9pm on Wednesday, August 15th with some of Austin's best young chefs as special guests in the studio to talk about Julia Child's inspiration. KLRU Community Engagement Vice-President Maury Sullivan also told us he had reached out to local food bloggers "asking them to write blog posts about how Julia inspired them, what they learned from watching Julia in the kitchen, or to share one of their favorite Julia recipes."

Trace pastry chef Janina O'Leary considered Julia Child an important mentor and has created a special dessert in her honor. The restaurant in the W Hotel will be serving Profiteroles with Bourbon Pecan Ice Cream all week.

All this talk about Julia Child brought up my own memories of her and the impact she had on my life as a teenage television viewer, as a cook, and as a food writer. Growing up a fat kid in the Fifties and Sixties, mealtimes were often a battleground and the kitchen was the war zone, with my parents and I on opposite sides of the battle. I'm not one of those cooks with rosy, nostalgic memories of learning to cook with mothers or grandmothers. The grandmother who had been a boarding house cook and caterer died before I was born and the other died when I was only 12. My mother didn't appear to enjoy cooking -it seemed to be a source of worry and tension. The message to me was blunt: You're fat - you should be outside playing, not hanging around in the kitchen.

As a teenager, I began to watch the PBS cooking show starring a tall, gawky woman with the funny, warbling voice and two things about the show made a big impression on me: the food she was preparing was vastly different from the fare in our West Texas home and Julia Child seemed to be having a hell of a good time cooking. Was it possible that cooking and sharing food with others could be fun? In Julia's world, the kitchen appeared to be a comfortable place where it was acceptable to make mistakes and really enjoy food. That message really appealed to me. Once I was away from home, I gravitated towards kitchens and have been around them ever since, one way or another. I worked in restaurants and hotels as a college student and got my first taste of cooking for people close to me as a college student living in co-op house West Campus. I still think of that kitchen on West 21st Street as my first kitchen. After a failed attempt at teaching elementary school, I had a career that included work as a restaurant pastry chef, catering, and running a wholesale dessert business before I became a food writer.

It was when I became a food writer at the Austin Chronicle that I finally had the chance to meet Julia Child. In the late Nineties, I was lucky enough to attend the Greenbrier Symposium for Professional Food Writers at the legendary old railroad resort hotel in the mountains of West Virginia. Ninety food writers are invited to spend a week at the resort every year, sharing meals, attending professional development seminars, and networking with other members of the profession. Julia Child as well as many other food writers and cookbook authors I admired were in attendance that year. For someone relatively new to the profession, it was heaven. Child was into her 80's at that point, but she was spry and totally engaged all in the activities, being the first one to arrive at breakfast and often closing down the hospitality suite at night. A culinary school graduate from Georgia named Virginia Willis was assigned to assist Julia that week, walking her to and from the various events and making sure she had everything she needed. How I envied her that assignment. (Virginia Willis has gone on to a successful career as a cooking teacher, food television producer, and cookbook author. She was kind enough to share a photo of herself with Julia Child and Nathalie Dupree for this post. Read what Willis herself has to say about that experience .)

During one of the seminars, we were encouraged to introduce ourselves and share our culinary inspirations. I talked about how watching Julia Child on television had made me appreciate the wonders of the kitchen and read a quote from Epictitus that expressed what I had learned from her good example: "At feasts, remember you are feeding two guests, body and soul. What you give to the body you presently lose, what you give to the soul you keep forever." I mentioned that the quote was printed on my business cards and that evening in the hospitality suite, Child shook my hand and asked for one! She asked me some questions about myself, immediately putting a star-struck fan at ease. We joked about not being regular-sized women - she was so tall and lanky, I'm so short and rotund. We discovered we shared the experience of shopping for clothes at Lane Bryant, a specialty clothier and catalog for big and tall women. If you can just walk into most stores and buy clothes off the rack, you have no idea what torture shopping can be for those outside the mainstream! I know it may sound silly, but having something so personal in common with this woman I respected so much felt like validation to me. Yet another valuable gift from Julia Child.