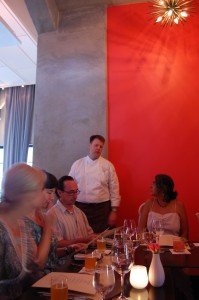 TRACE is the restaurant in the downtown W Hotel, a restaurant I have always enjoyed (their dedication to local and organic sourcing is right down my alley) and was lucky enough get the assignment to review.

Chef Hargrove, who was in charge at the time of my review, has departed from TRACE to take over the Chef duties at East Side Showroom, freeing Chef Sonya Cote to concentrate on Hillside Farmacy.

TRACE’s new Chef de Cuisine is Ben Hightower (no relation to our Jim). Ben Hightower grew up in New Orleans, Louisiana. He went on to study at the CIA in New York. After a string of high-profile New York City jobs, he worked at the W Hotel’s Blue Fin restaurant in Times square. In 2010 he abandoned the corporate restaurant scene and moved to Austin where he spent a little over a year working with Tyson Cole and Paul Qui at Uchiko. When the job at TRACE opened up, Hightower landed it and I have to say he seems pretty happy to have landed such a choice gig! The crew at TRACE (Pastry Chef Janina O’Leary, forager Valerie Broussard, Executive Chef Nadine Thomas) have always struck me as a relatable and fun-to-work-with group of people, and the standards at TRACE are of the highest. TRACE hosted a media dinner on Monday night to which I was invited, to showcase Chef Hightower’s summer menu. Ahh…this is the kind of experience that is the payoff for all of the grunt work of restaurant reviewing! The food was magnificent, the company stellar and, for a freelancer like me, it was a lovely taste of what it might be like to belong to the 1% (at least when they are at dinner at elite hotels!)

Chef Hightower’s New Orleans roots were immediately apparent from a quick glance at the menu: the first course was Blue Crab Hushpuppies with Remoulade, followed by Heirloom Tomato Gazpacho (tomatoes from Springdale Farm). I have never been a huge fan of gazpacho, no doubt because the earliest versions of it I encountered were not appreciably different than bowls of salsa (it was the eighties); THIS gazpacho was probably the first (other than Tyson Cole’s “tomato water”) that I actually enjoyed. The third course was devastating: Corn Ricotta Ravioli (corn from Fruitful Hill Farm). Perfectly cooked ravioli stuffed with corn and ricotta in a fresh corn and morel mushroom sauce—I could have eaten a dozen. The Memorable Baked Grouper with Carrota

The Fourth course brought it all back to Louisiana again: Dirty Rice Stuffed Roasted Quail. Absolutely delish! It went extremely well with the ravioli dish, I hope they serve them together. Fifth course was another revelation (a tie in my opinion with the corn ravioli for Outstanding Dish of the Evening) Roasted Red Grouper with Carrots. That sounds so plain, but the dish was anything but; a perfect rectangle of roasted grouper with a thin, buttery crust, sitting in a carrot emulsion and garnished with the most perfectly roasted young red and orange carrots I have ever tasted. Here and there on the plate, English peas, with a trailing bit of pea-vine. When you are using fresh and local vegetables, the flavors are so much more pronounced. The carrot flavor was perfectly equal to the grouper flavor, each complementing the other.

This was followed by seared pork belly with grits, and two desserts. Both desserts were just superb; the first was a lemongrass granita served with a berry sorbet, and it really stands out as an example of what a great pairing of flavors can do to expand each. the second was a Dark Chocolate Cremeaux, essentially an exploration of the flavors of dark chocolate in contrast to other flavors such as raspberry, strawberry, marshmallow, truffles, and meringue.

As an introduction to Chef Hightower’s ideas, the entire dinner bodes extremely well for Hightower being a great fit for the position. He seems to have the ability to create dishes that have the memorable quality that a great restaurant meal needs to have, and TRACE won’t settle for anything less than great meals.

The dinner was preceded by a tasting of signature cocktails by award-winning Libationist Joyce Garrison, and each course was paired with marvelous wines and beers. At the end, a grapefruit Limoncello topped off the evening. But that will have to be another post!