A Glimmer of Tasty Hope in a Small Town

Where to find the good eats in Wimberley 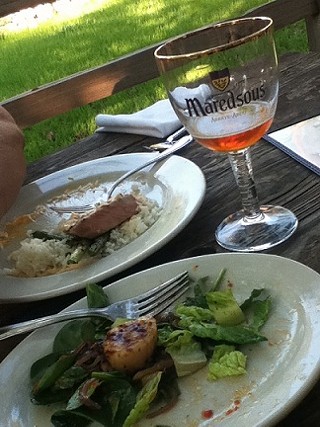 Mid-meal at Kate’s Place. It was so good, we couldn’t wait for pictures. Photo by Meghan Speakerman

Wimberley is known for its beautiful hillside scenery, gorgeous rivers and creeks, and some of the best gift shopping in central Texas. Restaurants like New Braunfel’s Gristmill and Driftwood’s Salt Lick draw crowds from hundreds of miles away.

People may travel far for the touristy goodness that is Wimberley shopping and lodging, but they don’t necessarily come for the food.

The food scene in Wimberley is looking up with restaurants like Kate’s Place, Brewster’s Pizza and The Leaning Pear refining the palates of a little city less than an hour southwest of Austin.

As a Wimberley native I know my stuff, so I knew I’d be SOL in the culinary department when I moved back home from Austin a year ago. I literally lost weight because of the town’s early closing hours and lack of good, varied food. If it’s after dusk and you’re not in the mood for Sysco’s finest, you’re choices are basically limited to either a hot pocket from Exxon or going hungry … Then I found Kate’s Place, and I’ve been in love ever since.

Spunky owner Kate Tilton often hangs out in the indoor/outdoor bar, making sure conversation and tunes are good and that patrons are well taken care of. Locals knew the place was doing something right when it not only managed to stay open but continuously progressed in a location where many other restaurants failed. Maybe it’s the seemingly residential, u-shaped driveway that threw people off during past occupancies of the space, but that doesn’t seem to be an issue now. Once you cruise up to the rustic, picturesque restaurant and lawn, you know you’re in for a treat. The French onion soup is killer and perfect when craving something homey. They refuse to serve it to-go for quality control purposes, (a much appreciated detail). The salmon with seasonal vegetables and a dill crème sauce is healthily filling and a personal favorite. The menu is fun and jumps all over the place; something that is much needed in smaller towns. I can get a bratwurst, seared tuna, edamame or scallops IN Wimberley, thanks to Kate. Praise the Lord! Signature dishes include lamb chops and a revolving selection of quiches. The specials are always thoughtful and of a higher caliber than what the area is used to. Kate’s son, general manager Paul Tilton, carefully creates the bar menus and plans on switching to all Texas-brewed drafts soon, including Blanco-made Real Ale. As of two weeks ago, the restaurant now has a permit for live music, with a big patio ready to be filled with concert-goers and large events, like weddings.

Brewster’s Pizza is a family owned and operated brick oven pizza restaurant and microbrewery. They’ve mastered a variety of popular beers, from a hefeweizen to an IPA, all served in large, fish bowl-like glasses. I’ve heard people in other cities recognize and praise the place, and have yet to hear someone say they dislike their brew. The man behind the pies is as interesting as their menu is delicious- owner Bruce Collie is a German-born retired NFL lineman with two Super Bowl rings. He has thirteen kids and the very large family has been known to dress identically in the past.(I digress, we were talking about pizza.) They use quality ingredients in their food and beers, and it pays off taste-wise. This business is definitely one to support if Wimberlians and visitors want a pie option other than Pizza Hut.

Speaking of pies, (actual pies, not pizzas) anyone visiting Wimberley HAS to get a Wimberley Pie Co. pie, specifically the blackberry pie. This business is a staple in the town and has been pleasing customers for decades. Once you bring one of these pies to Thanksgiving dinner, it will be an annual requirement.

The Leaning Pear is a quaint restaurant whose mission to serve local, wholesome food in a cutesy stone house has struck a cord with people wanting something fresh rather than something thrown into a fryer. The house salad scores big with some of my favorite salad components; spiced pecans, spinach, local goat cheese and a shallot vinaigrette. The salad trio is another favorite, consisting of roasted poblano pimento cheese, pecan and black currant tuna salad, and an herbed chicken salad. It’s filling, protein-packed and makes for a great lunch. The Leaning Pear has limited hours and the limited offerings of what I call the standard SSS (soup, salad and sandwiches). I understand it can be a struggle in a small town to stay open past lunchtime and to offer extensive menus, but these are reasons why many Wimberley restaurants tend to disappoint. Prioritizing their standard of food and use of local ingredients, Leaning Pear is still among the top in good eats. Like Brewster’s, this restaurant has managed to become well-known outside of Wimberley, with its reputation proceeding it before visitors even arrive.

I’m going to let you in on some little-known local secrets about the food in Wimberley. As far as the best swimming holes there, that’s information I will guard with my life.

Mima’s Kitchen has had the breakfast taco scene in Wimberley on lockdown for over a decade now. Never altering or compromising family recipes, the consistency has been impeccable throughout the years, and the business has flourished since first opening their doors. But those “in the know” wanting the true taqueria experience go the Shamrock gas station for delicious, hearty breakfast and lunch tacos made with whole beans and served with the best salsa in town. It’s hard to say who sells the better taco-fanatic shirt; Mima’s lawsuit-waiting-to-happen “Taco Flavored Kisses”, or the gas station’s “Tacoholic”. Either way, it’s nice to have a little variety in the breakfast taco department.

I crave a good burger like I do Mexican food, (I swear the two are addictive). I would say Ino’z would be in the running for the best burger in Wimberley but since they serve on only Styrofoam, a practice they claim to be a water conservation attempt, I boycott this restaurant and they are disqualified in my imaginary burger contest. This might be a surprise to some, but my favorite burger in Wimberley is at Riley’s On The Backbone. This once-seedy bar on the famous stretch of winding highway between San Marcos and Blanco on Ranch Road 32 has made a turnaround and then some, offering yummy bar grub and my favorite flame-grilled burger in the area. This is the kind of place that makes you feel worlds away; it’s country in the way that I love- Texas Hold ‘Em tournaments, sweet bartenders that don’t hold back on using pet names, and bar tabs simply consisting of names scribbled on tickets. Unlike Wimberley tourist hotspots that charge out the wazoo for a simple, all-American classic, the burger at Riley’s is reasonably priced and is offered with fries as the Monday special for $6.

Check out our story on brewpubs for a nice map-out of good food and brew in the heart of the hills.