Northloop's newest spot is open and ready for SXSW. 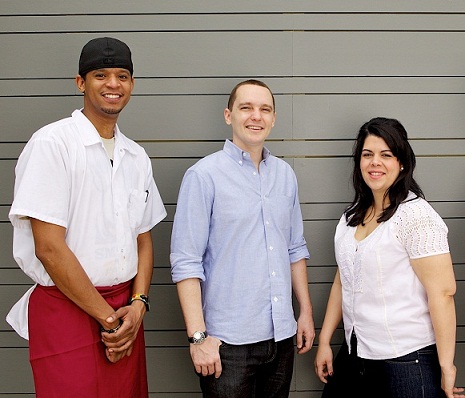 Austin’s brand-new Drink Well is already exciting locals in their first week with their bar/restaurant identity crisis. “It’s an interesting mix. Are you a bar that serves food, or are you a restaurant that serves drinks? We’re kind of walking that line. We want to be great at both,” owner Jessica Sanders said.

And it doesn’t hurt that owners Michael and Jessica Sanders are dear friends of Chef Roblé Ali from the Bravo show, or that he collaborated with Executive Chef Aaron Zarczynski on the quirky and delicious menu. That’s right- the no-nonsense, high energy, famous caterer who’s clientele includes the President and Mariah Carey has a little home here in Austin on the Drink Well menu, which includes items seen on his show, like the Crack and Cheese; a pasta dish tossed with five cheeses and duck bacon.

“I made (the Crack and Cheese) up this summer because I had to make mac-n-cheese for some people and I wanted to put bacon in it and I couldn’t,” Ali said.

He was also proud of what he called “a twist on an American classic”, the chicken sausage and waffles.

Ali and Michael Sanders are childhood friends and are so close, Ali officiated the Sanders’ wedding. Ali has been back and forth to Texas working on the project.

“(Consulting) is something that I do to keep myself busy through slow periods; catering is a seasonal kind of thing,” Ali said.

Being that Drink Well is an ‘American Pub’, there are no hostesses or servers and orders are made at the bar in exchange for Uno card table markers. The routine is different but easy to pick up, and the hospitality is still there, with owner Jessica QC-ing the floor in a cutesy floral apron, making you feel like a guest in her personal kitchen.

Previous Forbes Magazine and AMC Network employees, the Sanders moved to Austin two years ago with the intent of bringing a lil’ New York neighborhood bar-feel to an Austin area lacking a certian middle ground.

Jessica touched on how there are craft restaurants and dive bars in the area, but nothing quite along the lines of what they’re doing. She said they wanted to go the bar route initially, but that the change of plan worked out in their favor, considering the caliber of food.

“They’re off to an amazing start as restaurateurs. They’ve done such an awesome job. I knew that they would because they’re two very smart people and they’re very dedicated people. When they say they’re going to do something, they do it, (and) they do it well,” Ali said.

As a starter, Zarczynski’s brainchild, the brussels sprouts appetizer is perfectly salty, crispy and delicious with a beer. Even chicken nugget-lovin’ kiddos would munch these puppies down.

The craw daddy and grit cakes were perfectly satiating, with sauteed cherry tomatoes and a bed of corn acting as nice breaks from the creamy, rich goodness. For a mud-bug dish, it is as visually appealing as it is delicious.

“They’re kind of our take on shrimp and grits,” Ali said.

Saying that the seasonal menu is simple might be an understatement; it definitely is not large, but it packs a punch. They offer one burger and one salad in addition to a handful of creative collaborations. The salad stands strong as the only leafiness on the menu, with the quintessential salad components- beets, goat cheese and a bad-a blood orange vinaigrette.

The Great Defector is a cocktail worth noting- a creamy concoction of lemon, egg whites, orgeat syrup and Waco-based Balcones Rumble (a rum-like spirit made of turbinado sugar).

Drink Well has the best of the basics covered when it comes to their beer rotation, currently offering Dogfish Head, Thirsty Goat and a local fav, 512 Pecan Porter. Both the wine and cocktail menus are fun and approachable.

The El Diablo cocktail is easy to drink. It's like a Moscoe Mule and a Margarita had a baby, and somehow some blackberry got in on the action too. For the real manly men, Drink Well's Manhattan is a beast, with mole bitters and house-made date syrup ... yes please!

For a little protein or dessert between beers, consider some Sanders family recipe pickled eggs, or better yet, house-made twinkies.