Whose cuisine will reign supreme? 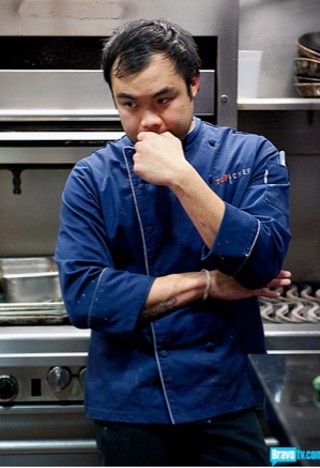 Someone get this man a manicure! (by BravoTV.com)

There’s something so thrilling about the opening montage of Paul’s victories as the opening credits roll for the season finale of Top Chef: Texas. While it’s true that Sarah is on a roll for the Canada leg, she truly is the underdog both hard stats-wise and in America’s collective heart.

I should back up and say that my husband and I ventured over to the new home of our good friends, Christian and Julie Remde, for dinner and watching the finale. Christian, ever the trickster, made a delicious vegetarian risotto topped with arugula in honor of risotto being every Top Chef contestant’s bête noir and Tom Colicchio’s man-tantrum (mantrum?) about Paul’s arugula in the Fire & Ice challenge. We had a really lovely time and whooped and hollered like we were at the Super Bowl (and really, this was the Super Bowl of Austin food nerds. Thanks, Remdes!

So, Tom and Padma remind Paul and Sarah that they are competing for the title of Top Chef, as well as $125,000 courtesy of Healthy Choice (Taste the Monsanto!). They’ll have to create a four-course tasting menu for 100 people, in one of Vancouver’s finest restaurants.

While Sarah and Paul talk about their potential sous chefs while dust motes swirl around them in the hotel room (had they just had a pillow fight?), we see that the folks competing for the eight sous spots comprise eliminated contestants from the very first rounds (including Tyler Stone, who hacked a side of pork to bits), Keith, Heather, Grayson, TyLor, Nyesha, Pretty Chris, and two master chefs, Marco Canora and Barbara Lynch.

The final two enter the kitchen to select their sous chefs via a blind taste test. (Side note: Sarah is rocking a full-on Bieber hairdo here and ... yeah, it’s not really working for her.) Paul and Sarah start tasting. They’re so nervous, y’all!! Pretty Chris made an Asian-inspired dish “to lure Paul” into choosing him. You stay blind to your white privilege, Pretty Chris.

Paul gets first pick and chooses Chef Lynch’s dish. SCORE! Sarah picks Nyesha, which she’s happy about because of Nyesha’s facility with sauces. Paul picks TyLor’s dish. Then Sarah starts trying to figure out which dish is Heather’s … and ends up with Tyler Stone. You should have heard the roar of Schadenfreude that went up in the living room! It still makes me laugh! See, Sarah, that’s what you get for trying to pick favorites. You end up with an incompetent boob. And then, of course, she has to be the Mean Girl and says, “I’m not letting you butcher.” Lovely.

Paul picks Pretty Chris, Sarah gets Heather for the Mean Girls Reunion Tour. Paul picks Keith’s Dungeness crab dish, and Sarah’s final pick is Grayson’s pasta carbonara. Neither cheftestant picks Chef Canora, which has to be uncomfortable for everyone.

Planning, planning, shopping, et cetera. Sarah wants no drama, just fun. Shopping. Paul dithers a bit about his protein, Chef Lynch thinks he should stick to the plan, Paul buys shrimp even though he doesn’t have a plan for it. (Chekhov’s prawns?)

We learn that Paul failed out of college and was (is?) a disappointment to his parents. Winning Top Chef would prove to his parents that he can actually follow through with something, says Paul. OMG. Stop it. As a parent, this breaks my heart. I seriously doubt that the Qui parental units are like, perpetually disappointed in their son.

Paul’s first course will be chawanmushi with crab, second course is grilled loup de mer with honshimeji mushrooms, third course is congee with slow-scrambled eggs with uni and fried kale, and the final course is coconut ice cream with kumquat confit and puffed wild rice. ‘Scuse me, I need to sop up some drool…

Cut to Sarah’s kitchen and she tells us, while being badgered by Tyler Stone, that her first course is a squid ink pasta with a spot prawn tartare; her second course is a rye bread crusted steelhead trout; her third, veal cheeks and sweetbreads; dessert is hazelnut cake, roasted white chocolate, and a peppermint ice cream. She lost me at veal cheeks and sweetbreads. Meanwhile, Tyler is either really not confident in the kitchen or really wants to do a good job. Either way, he’s driving Sarah crazy. Keep fighting the good fight, Tyler!!! Sarah, that’s what you get for trying to game the sous chef-selection process. You wound up with an albatross. Well played.

We will not even speak of the Product Placement Interlude with a very cotton mouthed Emeril. Seriously, I think he loses enunciation skills in between every episode and just lets his jowls do the talking.

The next morning, we see Sarah and Paul assigning their stations. While Sarah barks instructions, Paul appears to be walking his sous chefs through the method for each dish. He’s got a central list of each person’s task and ingredients; I should be so organized. And, whoops! The crab has gone south, so Paul decides to punt and grab the Plan B spot prawns he picked up at the market. Another example of why you should always have a backup.

Over in Sarah’s kitchen, Grayson notices that Tyler Stone is going at his own pace, so she and the rest of the ladies are going to “jam out with [their] clams out” and get the meal done. My husband says, “You know, what I really like about Grayson is how classy she is.” Indeed.

Oh, whoops, Paul is met with his parents and girlfriend and GOOD LORD, there is not a dry eye in the house. So sweet! Paul’s third course is not as successful as his previous two; Cat Cora doesn’t see where it fits in the menu. I can’t put my finger on why, but Cat Cora irritates me. The fact that she is the host of Bravo’s new show, Around the World in 80 Plates, does not increase its appeal for me.

I think it’s around this point that the results of the text survey inquiring whether viewers thought Paul or Sarah should win are announced and it’s like 80-20 in favor of Paul. And to that we say, after we are done roaring with laughter, “no shit, Sherlock!”

Padma says that Sarah’s veal cheek is luscious. Sarah’s fiancé notices that there are pin bones in the salmon. Ugh, pin bones in salmon is the WORST. Nice catch, fiance. Paul’s chawanmushi for the second seating is overcooked. Emeril, during Paul’s second course: “robble robble dis bwoth is duhwishus.” (I mean, really, what happened to the high-energy “BAM!” version of Emeril? We need that version of him, rather than this “I just had a root canal and am both still sedated and have cotton wads in my mouth” version.)

In front of Judges’ Table, Paul is nervous and explains that the evening’s menu represents who he is and what he loves. Sarah explains that she should win because she was raised by a single mother, which makes zero sense, but again demonstrates the two cheftestants’ approaches to this competition.

The judges mull. Yadda yadda yadda. This part is painful. Then they cut to Paul and Sarah in the clubhouse with Andy Cohen and she is grinning like an idiot and Paul looks grim and then pats her knee and we are like OH HOLY FUCKING SHIT, SHE WON THIS IS SOME BULLSHIT UP IN THIS TRAILER!!!!!

Sarah and Paul are called back in. Their friends and families and sous chefs are watching. What the shit is Grayson wearing? Tom says a lot of words, blah blah blah, it was really close. Sarah’s got tears running down her face. Padma says, “Paul …

[LONG EXCRUCIATING PAUSE, Y’ALL!!! Remember when Kevin Gillespie was a finalist, totally favored to win the whole enchilada and Padma was all, “Kevin … you are NOT Top Chef?!?! What if this is a replay of that season? OH GOD, I WILL EAT THIS PILLOW IF SARAH WINS. AND THEN I WILL GO ORDER A BUNCH OF PORK BELLY BUNS AT EAST SIDE KING BECAUSE UGGGGGGGG!]

Oh, thank you, baby Jesus. Sarah is very upset, understandably so, but mustering any empathy for someone who has been such a nasty piece of work is difficult.

As I write this, Paul Qui is in the Philippines, hopefully getting some R&R before heading back home to Austin. Because when he gets back, you know everyone is going to want a piece of him. What’s next for PQ? Will he purchase a stake in Uchiko? Start his own restaurant? Stay in Austin or dive into a bigger pond? It will be interesting to see where his career goes from here. Oh, and I should probably mention that both PQ and Sarah will be participating in the Austin Food & Wine Festival this April.

Top Chef Texas, Week 16: Preparing to Say Goodbye
Some thoughts on Top Chef: Texas before the lights go out