Who'd'a thunk a British lady could pull off a King Cake? 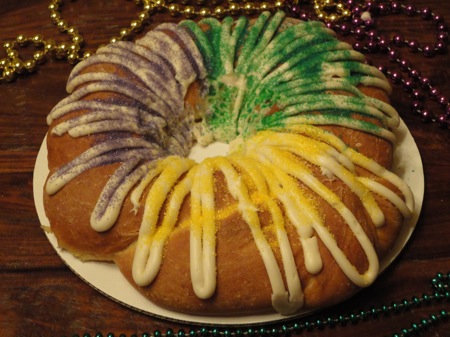 I first met Gemma Matherne, the mastermind behind Curious Confections, at one of the earliest meetings of ATX Swappers, where I was fortunate enough to get my mitts on some of her incredible millionaire's shortbread. 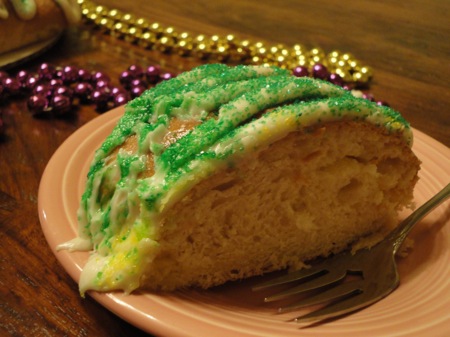 A few months later, my daughter gorged herself on Gemma's blueberry marshmallows while cavorting on the grounds of Tecolote Farms. Having earned the approbation of the two primary sugar monsters of our household, when Gemma announced that she'd be doing king cakes this year, I had to pounce.

I ordered the small (boy, am I glad of that, because this thing is huge!) cake filled with lemon curd ($12). After the obligatory photo shoot, I lopped off a slab to share with my husband (read: I gave him an enormous piece knowing he wouldn't eat the whole thing and I would have to finish it off).

This is legit king cake, y'all. The bread is not too sweet, and unlike those grocery store cakes, is tender and moist rather than dried out and nearly crunchy. The lemon curd is conservative and doesn't overwhelm the cake itself, allowing for a balance of flavors with the pastry and the generous (but not overwhelming) cream cheese icing.

My husband found the baby in his slice in mere seconds, which of course means that next year's king cake is on him. Fortunately for us, I know just where he can get one. 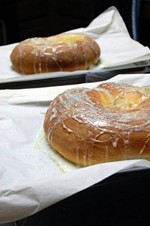