Pre-cooked frozen shrimp and the merits of screeching "orale!" 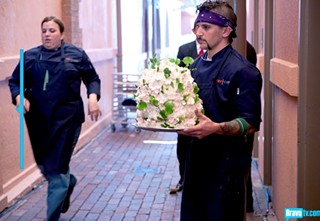 I was already a generous tumbler of very good cabernet sauvignon when my friends arrived last night bearing coquito, tiny treats from Cutie Pies, and more wine for a Top Chef-watching party at my house. Another generous tumbler and I was en fuego with the snark, baby!

Speaking of espanol, in this week's challenge, the cheftestants were to cater a quinceanera for Blanca, a pretty young denizen of San Antonio. I actually think this was a very cool idea, as quinces are HUGE in SA-town. Rest assured, though, that at least one (maybe all!) of the cheftestants will find a way to fuck it up. It's what they do.

First off, though, the competitors had to complete a rattlesnake Quickfire challenge. (I really, really, REALLY wanted there to be live snakes in those boxes.) Question: are there really that many nationally renowned chefs in San Antonio, or was that cheftestant fed that line about Johnny Hernandez (of San Antonio's La Gloria) being super awesome? I mean, really, are the chefs of New York and Chicago going to the bars after dinner service and going, "Hey, did you hear what Chef Hernandez did with chicharrones? He put them in a quesadilla! I might as well give up now. I'm never going to top that."

(I mean no disrespect to Johnny Hernandez, of course; just pointing out that the producers' hand was a bit obvious there.)

We Austinites were taken aback, perhaps even a bit worried, when Paul "Key to our Hearts" Qui landed in the losers' bracket for the QF. I really hope that he stretches himself beyond the "Asian street food" box here pretty soon. Crazy Eyes Dakota won the challenge. (Don't ask me what she made. Does it really matter? She got $5000 and immunity.)

Now then: quinceanera challenge. Chuy, who I thought was so adorable in the first episode, blurted out orale! upon learning the nature of the challenge. Dude, no. Just no. You were already on thin ice with your "Boo-yah, bitches!" in episode 1. Don't be obnoxious. Of course, with his loud identification as part of la raza, Chuy rendered himself a native informant for the cheftestants who had no clue what Mexican food should taste like.

Shopping. Keith (i.e., Bubba Gump) opts for frozen, pre-cooked shrimp and the guys he's shopping with are like, "cool." High!Strung!Beverly! gets kimchi, the traditional quinceanera food since forever. Pre-made tortillas are purchased. Have these people never watched Top Chef before? Have Tom and Padma EVER greeted pre-made tortillas with a beatific smile and a warm embrace? (SPOILER ALERT: NO.)

Cooking happens. Lindsay and Sarah inspect Keith's shrimp choice and roundly rejected it, 86'ing the shrimp cocktail. The chefs who tacitly approved Keith's purchase distanced themselves from the situation. (*cue the sound of a bus ignition turning over*)

The quinceanera happens. Blanca has opinions? About the food? But they all sound like questions? Blanca, my hope for you as you grow into a woman is that you get rid of that tic. Amen. Grayson's chicken tastes like cinnamon. Paul Qui's dish is yummy, so it's obvious he's safe. (And well he should be, having just won Eater Austin's reader poll for Chef of the Year!) Keith's enchiladas are too big and are wrapped in flour tortillas. (*cue record-player needle screeching*) "These aren't enchiladas, they're burritos," snarks Hugh "Unibrow" Acheson. Actually Hugh, if my understanding of San Antonio cuisine is correct, those are actually soft tacos. (*vroom* goes the bus engine)

The Green Team (Paul Qui's team, and very much not Keith's team) wins. Pink Team heads to judges' table. Chekhov's bus pulls out of the depot.

HOWEVAH, it's clear at judges' table that every member of Pink Team -- Sarah, Lindsay, Ty-Lor (ugh), and Keith -- are valid candidates for PYKAGging. Sarah for her lack of leadership, Lindsay for her flavorless cochinita pibil despite having lived in Me-hee-co, Ty-Lor for having a stupid name, and Keith for making Bad Choices. But Sarah's no dummy, she sees Chekhov's bus and gives Keith a powerful shove. BOOM goes Keith. You're outta here. He's under the bus, only his Mario Batali-orange Crocs visible. Wow. Shocker.

Next week: There's no crying in cooking, High!Strung! Beverly! And there's no more League of Their Own references ever again, Nyesha!

Moving on to Last Chance Kitchen: Keith goes head to head with Drew Curren in a mise en place challenge. Drew loses because Keith's dish better brought out the flavor of the clams. Whatever. I call foul. In what universe is it fair to give a freshly booted chef -- who runs a seafood restaurant in North Fucking Carolina yet bought frozen pre-cooked shrimp for a TOP CHEF CHALLENGE, where pre-made anything is a no-no -- the advantage by giving him clams as a required ingredient? Bullshit.

We love you Drew. Can't wait for Easy Tiger to open.