Recap: Carla Morrison at the Belmont 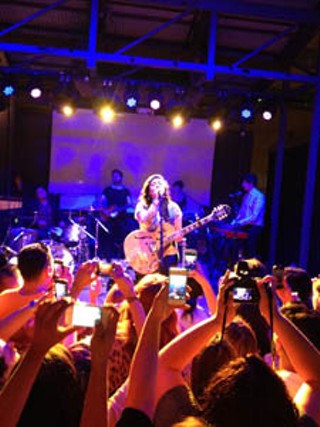 Her voice – so powerful yet serenely sweet – sat with you for a moment then dissipated in the hot Texas evening. Lovers held each other in their arms; women sat captivated and grew stronger with every lyric Carla Morrison released from her lips. This woman is fierce.

Morrison, from Tecate, Baja California in Mexico, began her U.S. tour in May and visited cities such as San Fransisco, Santa Ana and San Diego – Austin was her last stop. Her set included the song “Suciedad” – a xylophone, deep drum beat and backup percussion made for a sexy treat. Morrison paced the stage rocking her hips to. the. beat. with a big smile.

“Remember to smile,” Morrison said between songs. “Love freely.” She put her heart and soul into the last song. Eyes closed, face upward, her voice came from deep within – some sat in a trance while others cheered her on. We didn’t get to say goodbye to Miss Carla, from what seemed to be a product of exhaustion and perhaps dehydration, Morrison was helped off stage.

Morrison will continue her U.S. tour in July when she will visit East Coast cities such as New York, Washington D.C. and Cambridge. Despite cutting the show short, Morrison delivered an amazing show. Now, when I listen to her music, I am reminded of the fundamentals of being a good person, and to love freely.