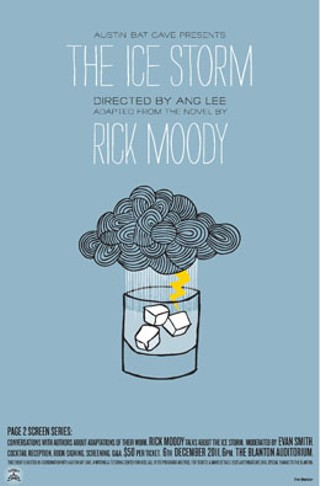 Don't miss Austin Bat Cave's new series, Page 2 Screen, a literary series about books and film and what goes on between them. ABC, a writing and tutoring center for kids in the Austin area, will be hosting several authors and the directors who adapted their works onto the screen.

The party will include a dialogue between the writer and director over their respective creative processes, a cocktail reception, book signings, time for questions, a screening, and oh my goodness so much more. The series kicks off tomorrow, December 6, at the Blanton Auditorium with a conversation between writer Rick Moody and director Ang Lee on the book/film The Ice Storm.

Personally I've been a fan of Moody's work for about a year now ever since I discovered The Ring of Brightest Angels Around Heaven, a collection of shorter fiction. Sadly have not yet read the novel in question, but I am nevertheless excited to hear him talk about his writing - on a fictional landscape where much reads like it was cooked up in an MFA workshop, Moody stands out as a unique and distinct voice.

It seems that director Ang Lee (Brokeback Mountain, Crouching Tiger Hidden Dragon, Sense and Sensibility - need I say more?) can do no wrong when it comes to the movies (okay, forget about The Hulk). His adaptation of Ice Storm was released to high critical acclaim and snagged a much coveted screenplay award at the Cannes Film Festival. Starring Kevin Kline, Sigourney Weaver, and Elijah Wood among a cast of heavy hitters, it looks good - I am excited to see it for the first time at the screening tomorrow.

So come! A movie, a great conversation, drinks - what more do you want out of a Tuesday night? Tickets are available online ($50, $35 for students, seniors and teachers). Show kicks off at 6p.m. in the Blanton Auditorium. Ticket proceeds go towards the support of Austin Bat Cave - truly a great organization, bringing writing instruction and creative opportunities to Austin area's kids. Check them out online at austinbatcave.org/about.

Hope to see you tomorrow night!