because there are still rules to rocking 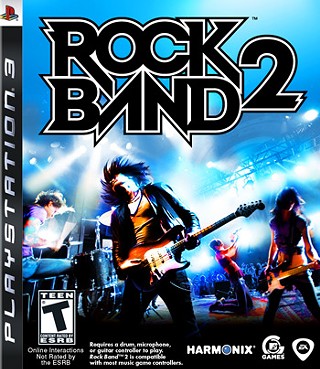 The Game On Austin event this Thursday, Oct 15, is meant to be a friendly affair, but we just can't help ourselves and want to include a competitive element for a few select guests. We're signing up 16 competitors to test their metal in a head to head Rock Band tournament!

Check the full rules after the break.

The winner will have their choice between a weekend pass to Fun Fun Fun Fest, a 2010 SXSW Music Wristband or a 2010 SXSW Interactive registration. Here is the rundown:

--Playing Rock Band 2 on PS3
--Two players at a time, head to head using Lead Guitar only (no bass).
--In the first round, the first person to sign up gets their choice of guitar controller
--In following rounds, the person with the higher score in previous round gets their choice of guitar controller
--The song will be chosen randomly by the game
--Some select songs that are not guitar heavy (like "What'cha Want", "Cool For Cats", "Shooting Star" etc) will automatically be skipped at the discretion of the MC.
--Each player gets one veto of a song to use per turn, so that they can opt out of a single song if they feel that they don't know it.
--The player with the highest points moves on to the next round
--The first round will be played on Medium difficulty. The second round will be played on Hard difficulty. The third round will be played on Expert difficulty.

--Because of time constraints we are limiting the number of participants to 16 players each competing head to head in a single elemination "sweet sixteen" type bracket.
--To participate we are opening the field to 10 RSVP's and 6 walk-up positions.
--To RSVP, you must e-mail logan@austinchronicle.com with "Rock Band RSVP" in the subject line no later than 2pm on Thursday, Oct 15. This is limited to the first 10 people.
--If you made the RSVP list you will receive a confirmation reply to verify.
--All RSVP'd participants must be present at the Mohawk and ready to rock by 7:15pm on Oct 15.
--Registration for the 6 remaining walk-up spots will be available on a first come first serve basis starting at 7pm
--If an RSVP'd participant does not show up by 7:15pm their spot may be forfeit to a walk-up participant.

Whew! Ok, sorry for all of the boring rules.... blah blah blah. Now get out there on Thursday night and show us what you've got!

Chrontourage Changing of the Guard!
I'll miss y'all!