Those Who Canelle Don’t Get Bitten

Warning: You might be eaten alive this summer – by all the goddamn mosquitos everywhere you go outside. 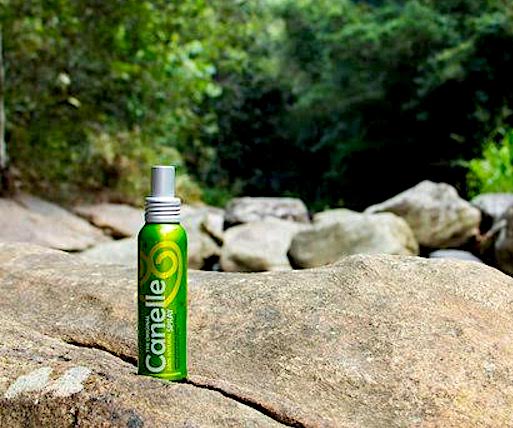 It’s not beyond the realm of possibility, is it? That the voracious (and sometimes disease-harboring) little buggers could ingest so much of your precious bodily fluids that you’ll find yourself pushing up daisies in a cemetery instead of enjoying another round of margaritas at the lake or wherever?

But, okay. We don’t have to engage in wild fantasy, even though wild fantasy is an excellent spice in the meal of life. All we have to do is acknowledge that the predatory habits of good old Culex and Anopheles and so on, all those relentless dipteran varmints, are enough to ruin any outdoor activities that a citizen has going on.

And then we have to figure out a good way to keep those insidious insects the hell away from our tender bodies, our heartsweet blood, our hardwon moments of sun-dappled relaxation.

And that’s where another excellent spice comes in: Cinnamon.

“It smells so good, we were thinking of calling it Canelle No. 5,” the company rep tells me with a wry smile.

(He’s a British fellow, this rep. He’s named Rupert, even, FFS, and he’s got that dry wit all British company reps are supposed to have.)

But, no, the product is simply Canelle – a cinnamon-based spray that’s putatively effective at keeping mosquitos the hell away from your skin.

It’s simply Canelle, I say, because it’s 100% natural – made in Sri Lanka, composed of oil from cinnamon bark and cinnamon leaves, everything extracted by steam-distillation and stashed in 100-milliliter bottles for your convenient use as a finely sprayed mist.

Also, “putatively,” did I say? Well, that was before I tried it. And then I tried it.

Mind you, I’m no scientist and this was no CDC-supervised experiment of verification. But I spritzed myself with this Canelle spray before going out to play a few games of after-work volleyball. And my teammates were like, “Dude, WTF, you smell like candy.”

Well, that’s true, I did smell like candy – sexy candy. But my teammates were also like, “Dude, WTF, how come these mosquitos aren’t biting you?”

Because it’s not even summer in Texas yet and the nasty flying buggers were already swarming, piercing every inch of human skin they could land a needle-sharp proboscis on … but they were leaving me the hell alone.

And I’ll also say that I might want to smell like cinnamon anyway – but especially if it’s going to keep the goddamn mosquitos away.

I’ll say, “Thanks, Canelle – you sure make being outside a much more enjoyable experience.”