Five Strange & Beautiful Pins You Should Know About

Because you don’t want your lapels going around all, ugh, naked

So many lapel pins out there lately. And some of them adorable enough to unleash a mild squee over, and quite a few of them hawking one fandom or other, and so many based on some TV-related creation, oh boy, advertise your corporately sponsored pop-culture affinity, rep-re-seeeeeeeent!

But, hold on a second. Parts of four of them – with Ms. Paper & Evil Mr. Paper hiding somewhere below …

Maybe that’s … cool? Because, uh, whatever floats your boat, right?

But maybe consider something a little beyond, pinwise.

Maybe consider something a little beyond and a little harder to find … yet so well-rendered in its exquisite freakiness that in all the world there’s no lapel, no jacket, whose looks wouldn’t be brought to nova levels of dark delight by having such handmade brilliance attached.

We’ve found some of those. Googling like fiends, rummaging through the insta-retail drawers of Etsy and Pinterest, following recos and rumors toward an apotheosis of lapel-pin fashion, we’ve wrangled up five enameled-metal adornments you may have missed but will probably develop an instant jones for … 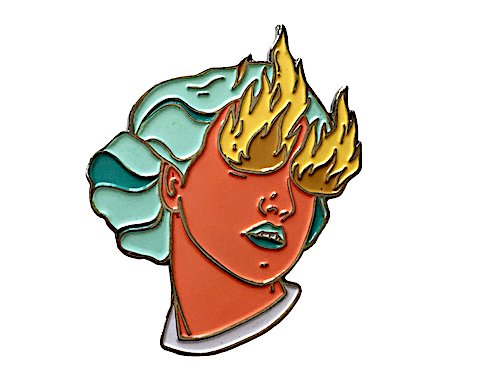 2. No one has to be an E.A. Poe aficionado to appreciate the arcane power of certain fabled corvids, of course. Thus, from Bat in Your Belfry’s Michelle Prebich out in California comes this macabre dazzler, Scavenger, featuring a raven about to feast upon a human heart. “Ain’t love brutal?” 3. How about a little Beetle Beast to keep your threads all snazzy? Here’s Coleoptaurus, a sort of hybrid Atlas-Beetle-and-hoofed-mammal, from Miranda Zimmerman's Faunwood in the Pacific Northwest. You might expect something like this from a woman with a bachelor’s degree in evolutionary biology; you just might not expect it to be so gorgeous. Bonus: This pin is also available locally, in Austin’s excellent Recspec Gallery right there in Flatbed World Headquarters on MLK: 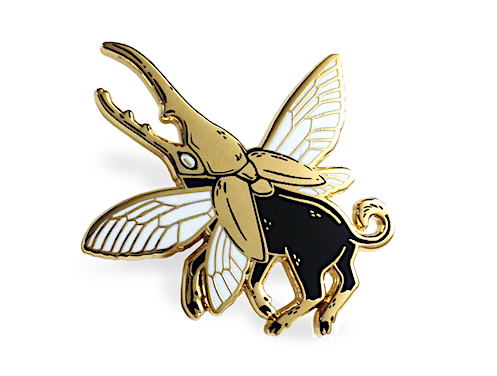 4. You know that Nakatomi Inc’s Tim Doyle creates all manner of concert and movie posters for his renowned company. But, pins? No, when it comes to brightly enameled goodness, the artist has entrusted that task to his six-year-old daughter Mei – who’s designed this couple of characters, Ms. Paper and Evil Mr. Paper, that we reckon will improve the wardrobe of anyone who appreciates good printing and quirky design: 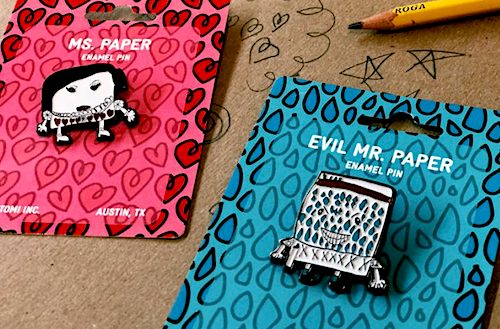 5. And here’s another poster designer who’s also … well, if we said he’s “dabbling” in pins, we’d be insulting the man. Because the pins that New York-based Dan Curran is making are more the work of a past master than of a “dabbler,” redolent of darkling intricacy and creepy graphic might. All of his pins are that, yeah – but we’re especially fond of this ocular abomination called Eye of Decadence: 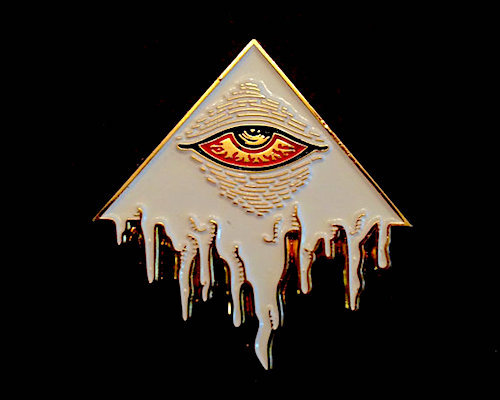