Efforts to save this local landmark continue

Update: The City of Austin Planning Commission meets at 6pm, tomorrow, August 26, in Room 325 of One Texas Center to vote on a zoning change for the International Modern house at 3805 Red River. The change has been recommended by the Texas Historic Landmark Commission.

In our first installment on this preservation effort, we reported that the Texas Historic Landmark Commission had voted unanimously to recommend historic landmark zoning for 3805 Red River. This case is somewhat unusual, since the owners themselves want to demolish the house, as opposed to the usual developers' bulldozer scenario. According to Lin Team, Old Austin Realtor, there has been a buyer in place who is willing to work with the city and the neighborhood to restore the house for some time. The hot issue remains the opposite findings of two engineering reports, done more than twenty years apart, by two vastly different engineers. The most recent report was done by a verifiable expert in historic residences, the first was not.

For those for whom this house is a personal landmark, email addresses for the planning commission members can be found on the city's website. Please include Steve Sadowski of the Texas Historic Landmarks Commission on all emails: steve.sadowsky@austintexas.gov. Reference case number C14H-2014-0007. 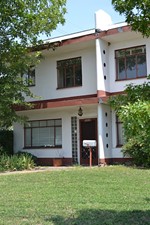 Queen of the Hill: 3805 Red River Stands Another Day
Demolition efforts are delayed by the HLC