Sartorial snapshots from Congress during AFF and TBF 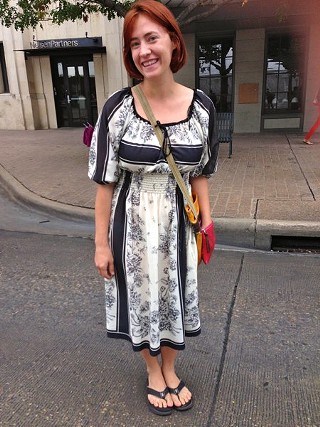 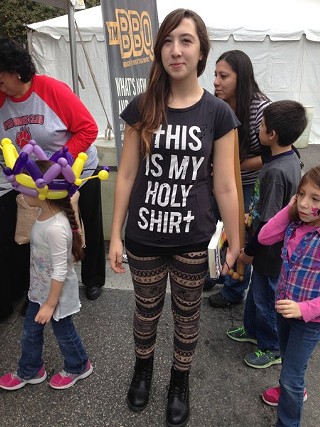 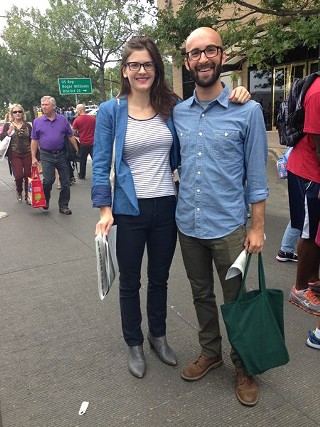 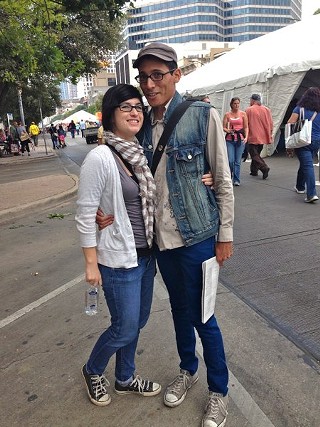 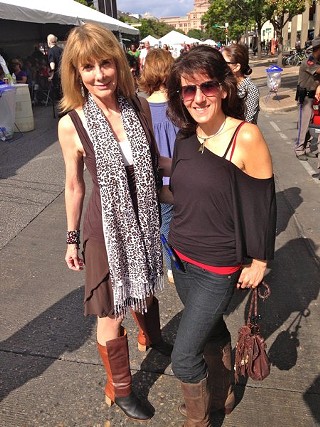 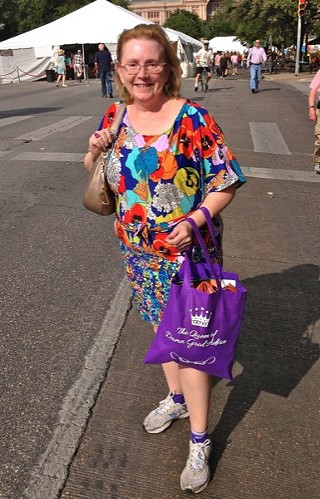 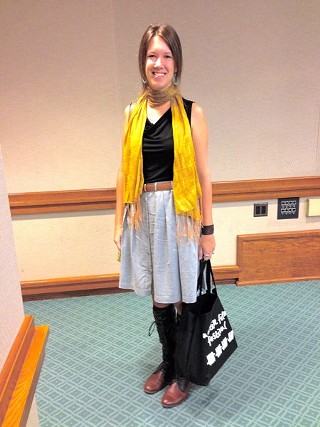 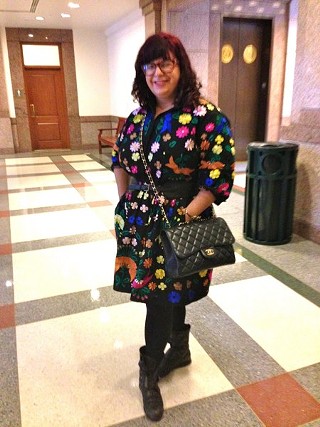 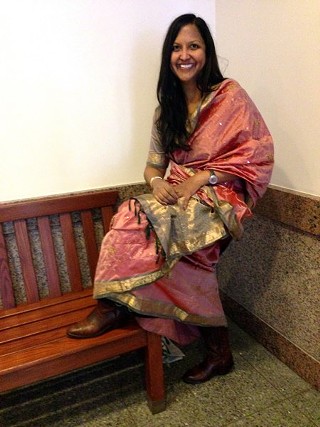 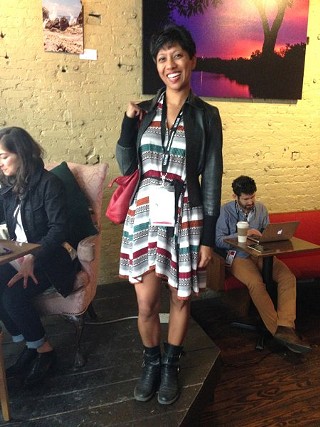 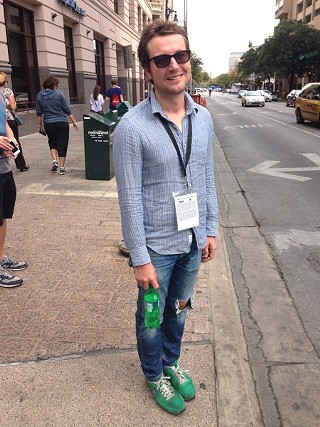 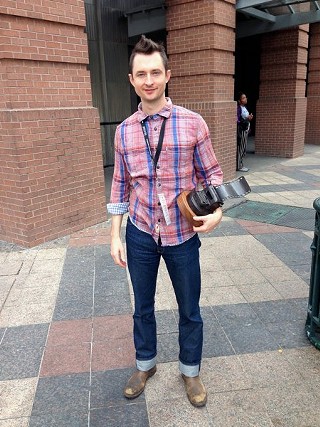 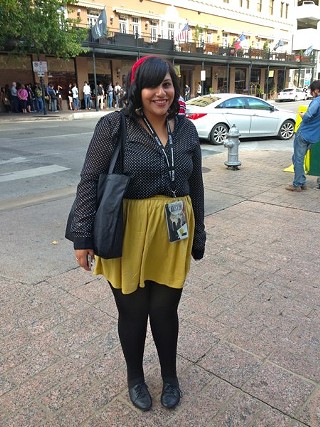 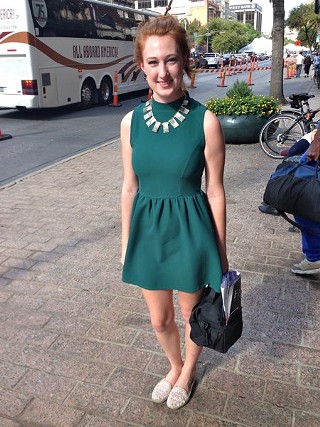 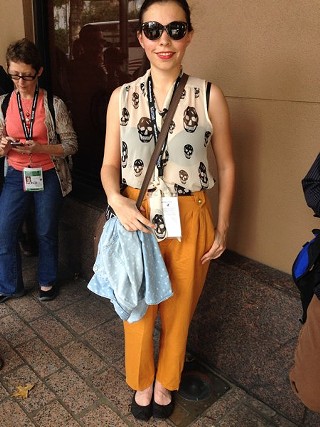 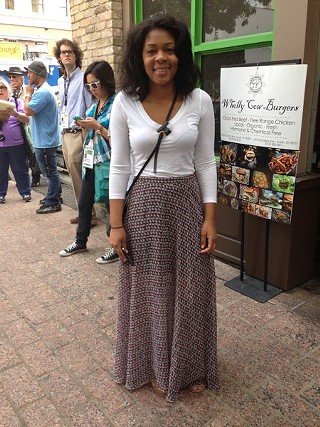 A sweet, scarf-print peasant dress with a colorful bag and flip-flops. It's Austin, folks. Relax. (Photos by Amy Gentry)

This past weekend, two of the city's most beloved fests did battle for dominance on Congress Avenue: the Texas Book Festival and the Austin Film Festival.

The turf war was particularly heated outside the Paramount Theatre, where lines of badged, black-clad film buffs stuck out their combat boots to trip bespectacled, book-clutching geeks in sweater vests.

Or maybe that's a John Hughes movie. In fact, the two sides, united by their pastiness, were able to coexist peacefully. Nevertheless, it was clear who was in line to see Vince Gilligan and who was in line to see Jonathan Lethem. As a lady who chose her argyle carefully that morning, I resolved to stage a street-style fashion face-off between the two fests, armed only with my iPhone and a willingness to make myself obnoxious to total strangers. For fashion!

So which fest was best-dressed? Your fearless, self-appointed fashion reporter literally stopped traffic to find out. (It was foot traffic, but it was still kind of scary.)

First, the ground rules. 1) The field of play was limited to the Capitol building and Congress Avenue. This not only narrowed the AFF sample, correcting what some might see as the inherent advantage of film people over book people (oh come on, you were thinking it, too) – it also meant big savings on gas money for your intrepid reporter. 2) Susan Sarandon was automatically disqualified, as was anyone else whom I suspect of bathing in the blood of virgins. (Are you listening, Helen Mirren?) 3) I would remain completely impartial, despite my own affiliation with the elbow-patch set.

Let's start with my home turf: the Texas Book Festival. On the whole, the literati dressed in muted, library-inspired shades: weathered boots in brown and black leather, subdued denims, and heather grays. This made pops of color – like the mustard yellow scarf and turquoise dangle earrings on writer Kelly Luce (Three Scenarios in Which Hana Sasaki Grows a Tail, A Strange Object, $15.95) and the vibrant Mexican embroidery on Anabel Graff’s black vintage-inspired dress – stand out.

Graff, an MFA student at Texas State University whose novella about “weird girls doing weird things” is coming out soon in e-format, told me her “theory of dressability”: Every outfit can be boiled down to three words. (She suggested “military Mexican-flower debutante” for her gorgeous ensemble, but I prefer the following: “Real. Chanel. Bag.”)

One of the best TBF outfits belonged to author Nina McConigley, whose pairing of a sari with cowboy boots out-sparkled a boringly be-blazered Lethem onstage at the Literary Death Match Saturday morning. McConigley, whose debut story collection Cowboys and East Indians was recently released (FiveChapters, $15.95), was born in Singapore and raised in Wyoming. Unexpected bonus? The sari revealed a glimpse of her covered wagon tattoo.

No fashion assessment of the TBF would be complete without a nod to the retired set; after all, they’ve got a lot of time to read. In a demographic that leans toward glasses chains and fanny packs, one Florida attendee’s graphic flower print, fading to pixels at the hem, brought a welcome splash of color to the proceedings. Transfixed by her candy-colored dress, I began to suspect that the by-and-large demure book lovers had me longing for a bolder color palette. Either that, or Florida was my spiritual home.

My suspicions were confirmed as I moved into the Austin Film Festival crowd, where bold, jewel-like pops of bright red, yellow, and emerald alternated with chic black and chunky accessories. These guys spend a lot of time in darkened rooms, but they clearly get dressed with the lights on.

Chronicle intern Neha Aziz added just the right amount of color to a polka-dotted ensemble with a goldenrod skirt and a red headband. An emerald-green dress with princess seams stood out from half a block away. Another AFF attendee paired two different skull motifs with mustard trousers for one of the film fest's best (and most seasonably appropriate) looks. Like a crow, I am attracted to bright, shiny objects, and I found myself crossing the street for a pair of sparkly flats or a red purse.

Moreover, the menfolk were bringing it, with hipster hair and studiously rumpled jeans. A pair of bright green sneakers caught my eye, as did Brooklyn resident Avram Dodson, who accessorized his Pee-wee Herman fauxhawk and artfully rolled plaid shirt with a typewriter-shaped award from the festival. (Dodson won the Narrative Student Short Jury Prize for his film Pistachio Milk.)

Conclusion? My impartiality was sorely tried, but eventually I was forced to admit that the AFF types were, with apologies to Brian De Palma, dressed to kill. But don't get too comfy, film nerds. Argyle is making a comeback.

Be sure to check out the full gallery by clicking on the image above. 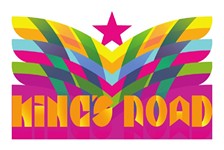 King's Road ShinDigs for West, TX
The gang at King's Road offer a way to help our neighbors 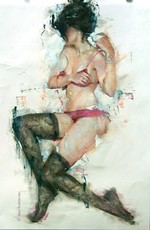