What Would Tim Gunn Say? That AFW's Black and Tan rocked.

An eclectic crowd gathered at Haven on Friday night for Austin Fashion Week's Black and Tan challenge, the brainchild of lingerie designer Megan Summerville. One of the few events of the week emphasizing construction and design over commerce, the evening did not disappoint.

Summerville invited a group of local designers to create a garment, democratically issuing the same yardage of two fabrics to each: 54" wide all-over cream lace; and black laminated tricot, or sheer tricot-backed matte tricot, in a base-weight plain weave.

The result was an unpredictable mix of well-executed concepts, including two plus-sized looks that may have brought the loudest applause. The era of throwing silk satin at a stick-thin zombie, giddily draping at the waist and pinning with a Van Cleef brooch laying around, must have thankfully gone out of fashion along with Halston's mirrored coffee table. These 24 artists, far from frivolous, each distinguished themselves on Friday night with soundly deliberate, original designs. One would expect to see a handful of keepers, at most. But, unanimously, look after look took hearty audience approval, even from the world-weary on our right and left.

This was the second design challenge that Summerville has concocted. The first was with the Weavers and Spinners Society of Austin, which paired weavers and fabric artists with local designers to make garments. "That event went so well that I decided that I wanted to create an event just for designers from commercially made fabrics. I gave away over 350 yards of fabric, from my personal stash, to 24 designers. From the previous event I knew that the designers grew and learned from the fabrics and I wanted to see this happen on a larger scale with this challenge. Resources, such as fabric, can sometimes put a damper on a design idea and restrain a designers creativity. I wanted to create an event where designers felt like they have an endless supply of fabric so I offered 15 yards to each designer. I was pleasantly surprised to see such variation in design, and each embrace the design challenge as intended," says Summerville. One factor that must have come as a bonus, was that the black fabric had an illusion backing, which sewers used to full advantage by creating sheer elements. Some cut silhouettes from solid black and presented them framed in illusion. This must be the season of the back, as one began to anticipate exits as well as entrances. The winner will be announced Friday, May 10.

Every runway show, whether in the tents at Bryant Park, the courtyard of the Louvre, or a second-floor lounge on Colorado street, is really a pageant of courage, and perhaps the very nature of this kind of theater is fraught. But it's never, ever boring. If you find yourself driving straight home to your sewing machine, not passing Kerbey Lane Cafe, because you will not sleep this night before sewing something, you are contagious.

For a photo gallery from Friday night's Black and Tan show, see austinchronicle.com/photos. 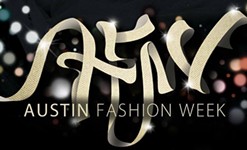 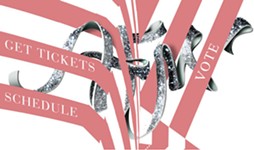